The following is an important press release on the subject of animal welfare. Please share with anyone who has a cat  and individuals who might want to give a donation to help us rescue some poor felines who face the prospect of a frigid winter outdoors. The picture is below is of baby kittens we rescued and found homes for.

Owners of outdoor cats in Côte Saint-Luc can now pick up their license tags at City Hall (5801 Cavendish).

The City of Côte Saint-Luc  adopted its first ever cat licensing by-law  recently.  It  came into effect on November 1, 2012.  Owners of outdoor cats  must have them registered at City Hall and obtain a cat identification tag, provide relevant  information required to process the registration of the cat and produce, on a one-time basis,  a certificate from their veterinarian stipulating that the cat has been spayed or neutered. This pertains to any cat six months of age or older. 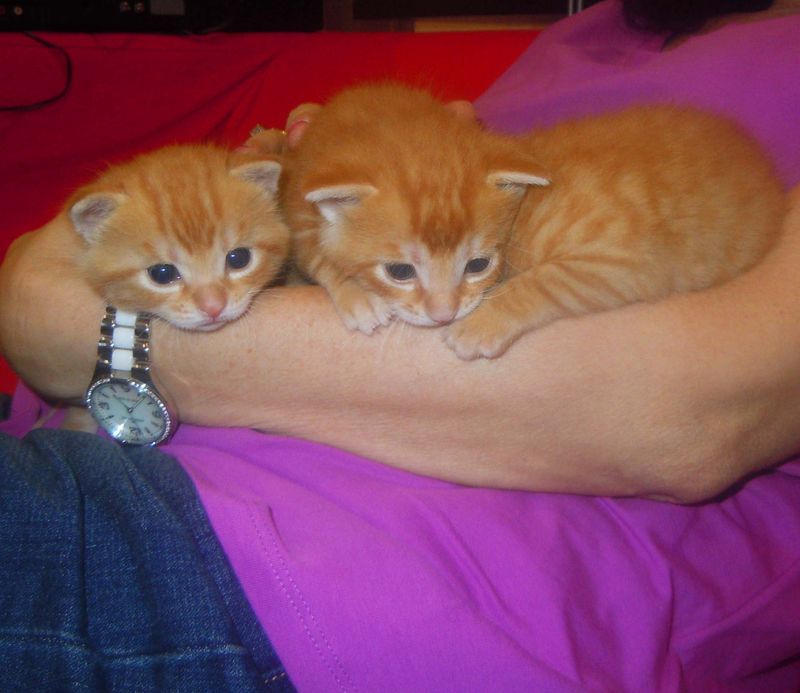 For this initial registration period, the cat identification tags will be valid until June 30, 2014.

City Councillor Mike Cohen, the city’s official liaison to the Côte Saint-Luc Cats Committee(CSLCC), is urging the owners of outdoor cats to kindly respect this by-law and immediately purchase their identification tags. It is the only way members of the CSLCC, who regularly capture abandoned cats, to know if they belong to someone. Fines will be issued to cat owners not complying with the by-law. They  will  range from a minimum of  $40 to  a maximum of $1,200.

Councillor Cohen is also sending out a plea to animal lovers to send donations to Educhat, the CLSCC’s partner in the Trap, Neuter and Release/Adopt Program. “As the calendar year draws to a close we have become overwhelmed with calls to trap homeless cats,” he said. “With the cold winter approaching, we want to capture as many as possible. Our regular budgetary allocation has run out and we are asking the public  to lend a hand.”

The committee has just come across a situation whereby an elderly woman who was feeding 12 homeless cats in her backyard moved.  Because the cats are familiar with the area and will not seek food anywhere else, the committee has recruited a team of volunteers to go feed these cats daily.The committee is also seeking individuals who are willing to adopt or foster homeless cats, many of which are baby kittens.

CSL Mayor's Annual Report on the Financial Situation of the City

Here is a report on the annual report of the Mayor on the 2012 Financial Situation of the city, the general orientations for 2013 and the three-year Capital Expenditures Program for 2013-2014-2015.

Over the last number of years, I have been using a program called Feedburner to send posts from my blog to subscribers.

Feedburner is no longer being properly supported by google and as such I will be switching to a new program.

I would very much appreciate it if those of you who have been subscribing to my blog would pleased email me back at communicationsmjc@gmail.com or mcohen@emsb.qc.ca with your email address. I will then add you to the new list. Please do so soon as Feedburner will be disconnected.

My posts, of course, are mainly related to the City of Côte Saint-Luc, where I am the councillor for District 2. I also write a blog for The Suburban Newspaper and from time to time I will include interesting items from there.

When I was young I remember attending many Remembrance Day ceremonies in Côte Saint-Luc. But as our veterans got older and November 11 repeatedly fell on a day in which the air was cold, the Brigadier Frederick Kisch Branch #97 decided to have our large commemoration for VE Day in May. At this time the weather is warmer and the attendance always much larger. 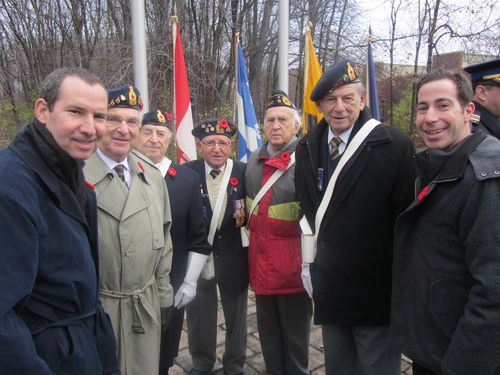 Remembrance Day has certainly continued in Côte Saint-Luc. Over the last many years it has fallen on a weekday. As a result the attendance was very low.

This year November 11 did fall on a  Sunday. It was cool outside, but not uncomfortable. The sun was shining and there were those remarkable veterans who still reside in CSL, looking as youthful as ever. Mayor Anthony Housefather was there, along with members of council Steven Erdelyi, Ruth Kovac, Mitchell Brownstein and myself. Federal Liberal Member of Parliament Irwin  Cotler was on hand, as was District 2 resident Martin Bogante (below), representing Liberal MNA for D'Arcy McGee Lawrence Bergman. Police Commander Sylvain Bissonnette in full uniform joined us. 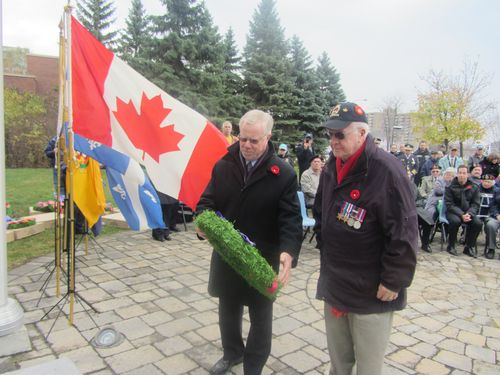 There was a good crowd but as I looked around I saw no youth. I am only comforted by the fact that I know many schools had veterans visit their classes earlier in the week.

Frank Levine, the president of our Legion, served as the emcee. We had veterans march to the front of our Veterans Park with the flag of honour. A trumpeteer played the last post. We all sang O Canada together and Mayor Housefather asked us to remember those who fought for this country and are no longer with us. 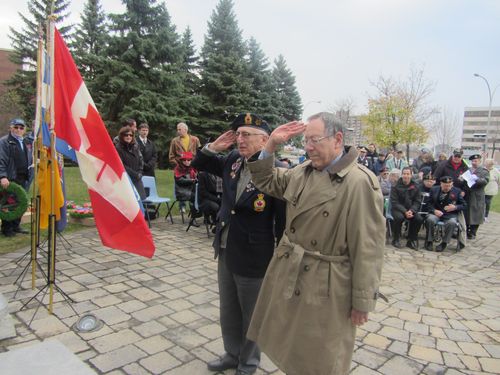 The fact that we still do have so many men who served our country in WWII is a treasure and one we must embrace. 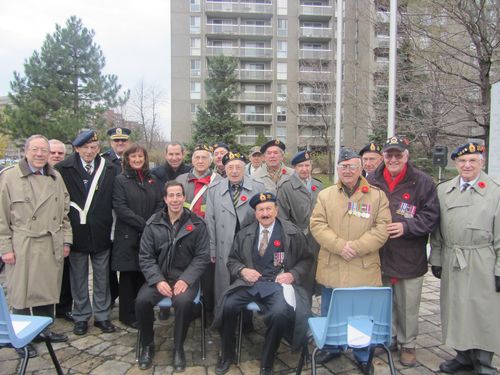 As the president of the organizing committee for this year’s Montreal commemoration of Kristallnacht, the Night of the Broken Glass, veteran educator Hanna Eliashiv wanted to do something different. Working directly with the Montreal Holocaust Memorial Centre, an outstanding documentary was produced and screened last week for the first time at Congregation Beth Israel Beth Aaron, located   in Côte St. Luc. 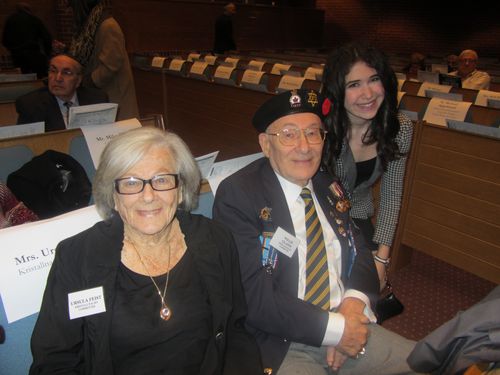 The film told the story of Kristallnacht from the standpoint of four Montreal Holocaust survivors who were witnesses: Charlotte Lintzel, Ursula Feist, Leo Dortort, Willie Glaser, as well as Alexandra Cohen, a young adult who has chosen to transmit  their message to her generation.(Feist, Glazer and Cohen are pictured here).

Charlotte Lintzel was born in Berlin just before the rise of Hitler. Her family had not fled; she survived the war in hiding. Ursula Feist was born in Berlin in 1921. Just after the start of the war, her family sought refuge in Shanghai where they later were interned by the Japanese. Born in 1928 in Graz, Austria, Leo Dortort was just 10 years old when he witnessed the riots taking place in Graz during Kristallnacht. Willie Glaser was born in Furth, Germany. He was only 17 years old when he witnessed the atrocities perpetrated during Kristallnacht in Munich where he was a student. Alexandra Cohen represents the generation of young Jewish adults. She is a human rights activist and an active member of Amnesty International.

The five individuals were in the audience and together lit a memorial candle. At the conclusion of the ceremony, Eliashiv was surrounded by admirers who asked her how fast she can get this film into schools – Jewish and non-Jewish- as the message sent was invaluable. “That is our plan,” Eliashiv promised. “We are working on an educational guide to accompany it and we want that to be finished first.”

“We are the future leaders of our communities,” Alexandra Cohen stated. “Kristallnacht and the Shoah must teach us to be vigilant for acts of hatred and racism.  It is our responsibility to listen for warnings like Kristallnacht and to never allow another genocide to happen.”

Dutort noted how Hitler used Kristallnacht to see if the rest of the world would react. It did not.

“Antisemtism,” said Furst, “is rising. We must teach tolerance in schools.”

Kristallnacht was a pogrom orchestrated by the Nazis on November 9th and 10th 1938. It took place throughout Germany, annexed Austria, and in areas of the Sudetenland in Czechoslovakia, then recently occupied by German troops. It marks the intensification of a regime of terror against Jews by the Third Reich. Kristallnacht owes its name to the shards of shattered glass that lined German streets in the wake of the pogrom - broken glass from the windows of synagogues, homes, and Jewish-owned businesses plundered and destroyed during the violence. All these events were greeted with total indifference by the international community.

Joel Lion, the Consul General of Israel, an eloquent speaker, noted that in 1938 the Jews of Europe had nowhere to go. “Palestine was closed,” he said. “No country in the world was ready to open up its doors But today if a stone is thrown in  France, Germany, the Ukraine, Canada or the United States, there is a place for the Jewish community – Israel. It is because of the State of Israel that you can live as a proud Jew wherever you want.” Visibly absence were young adults from the community. Where were all of the kids who attend the local Jewish day schools? And why did some very notable Jewish community organizations decide to hold special dinners and raffles on a solemn night like this? It is hard to figure.

While the official locally produced video is not ready for more of a public viewing yet, here is one about Kristallnacht:

Posted at 12:14 AM in Holocaust Remembrance | Permalink | Comments (6)