Last spring, only a few weeks before he  was hospitalized after a dangerous fall, my dad called with all of the excitement of a student who had just reunited with some old friends. He just came back from dinner at the Delly Boy's Restaurant where he and a group of his contemporaries had agreed to organize a reunion of the Côte Saint-Luc Slo Pitch Association.

Sadly, my dad (Larry Frederick Cohen), would never experience the evening. He died on September 3 and while he was pretty miserable during his hospitalization, at one point he still held out hope he would  make the event.  I think he would have been comforted to know how highly people spoke about him  at the reunion held on October 17 at the CSL Aquatic and Community  Centre.  More than 60 former players, mostly from the 50s, 60s, and 70s, were on hand. Allan J. Levine and I represented the city council. I thank the organizers, Mish Granik, Roy Salomon and Lionel Segal, for giving me an opportunity to say a few words about Larry. Below is a photo of myself and Councillor Levine with  guest speaker Dick Irvin and the committee. 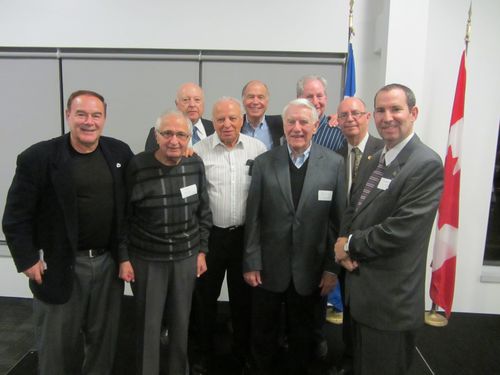 The  Slo Pitch Association operated for more than 40 years,  mostly at Kirwan/Wentworth Park. It started off at Westminster  Park, next to  Beth Zion Congregation where Rabbi Sidney Shoham (below) was one of the players. Rabbi Syd, who was  at the reunion, was so highly regarded  in his native Baltimore that he was once considered a major league prospect. "The local police had a team and they asked me to join them," he said, noting to many laughs that he suggested the name be Cops and Rabbis. 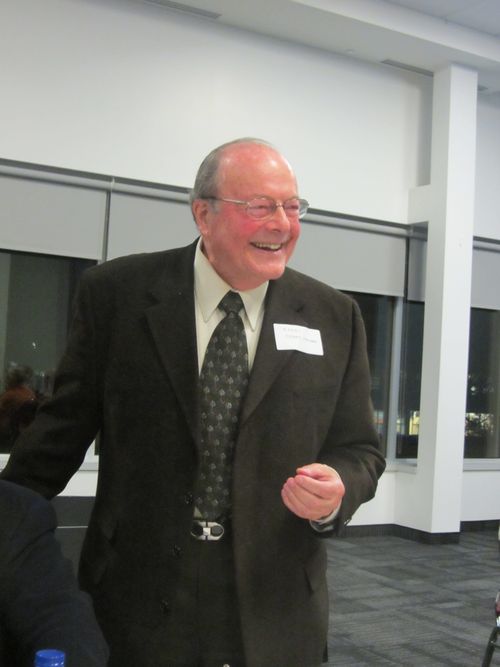 Harold Cammy, the invaluable management team member from the city's Parks and Recreation Department, helped coordinate the classy event which included snacks and conversation to start, a buffet from the Snowdon Deli and desserts at the end.  Legendary sports broadcaster Dick Irvin was the guest speaker and he was just fantastic, talking a lot about baseball and of course hockey. Dick remains a superb storyteller and there was dead silence in the room as he provided a slew of inside stories.  Segal presented him with a commemorative clock.

Granik went around the room and gave every former player a chance to say a few words. The anecdotes from their days on the field were priceless. Salomon explained how he arrived in Montreal from the United States in 196o and did not know a single person. "I  joined this league and all of a sudden I had 120 new friends," he explained. 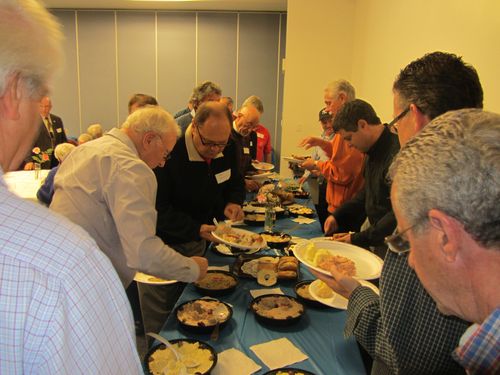 Some of the people in the room had not seen each other in decades. Lenny Goldfarb, who owned the popular Olympic Sports shop, came in from  Ottawa for the evening. Now 70, Len is spending his time as a hotly booked singer at seniors homes.

I had my own long history with this league. My dad was a player and served on the executive as secretary. I  would follow in his footsteps on both fronts.  Actually, I started off as the league's official scorekeeper. That meant I  attended every game in the summer (four nights a week,  two games per night) and got to know many of of these men who attended the reunion. At its peak, this league was top-notch and competitive with some extraordinary talent.

Mike  Rothpan was at the reunion with his son Mark. Mike played 48 years and was a pitcher, not a very easy position in Slo Pitch. Herb Isenberg (photogaphed) sponsored the Internationals, a dynasty for many years in the league. Earl "Glitter Boy" Engel, was a star  performer in the 70s, 80  and 90 and like me represented the younger alumni on hand. He hopes thata 70s, 80s and 90s reunion can be organized next. 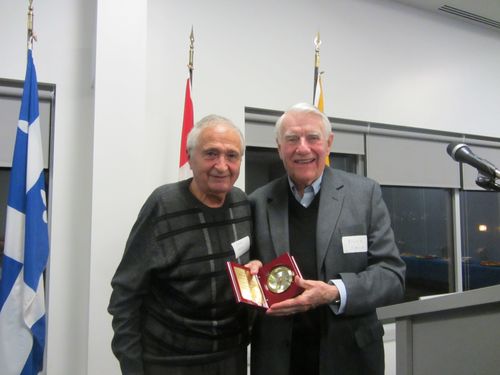 Harold Laxer and Ken Saxe were also on the committee.

“Roy and I got this idea while working out daily at the Snowdon Y,” Granik said. “Unfortunately,
we’ve lost a few of those players, but life does go on for all of us who are much older now."

Granik remembers the days when he started as a catcher with one of the original franchises sponsored by Westminster Homes and thereafter played right field with his bar mitzvah glove given to him by his father. He says in the eight years he played he never dropped anything that he could get to. Granik, a left-handed hitter was a spray hitter with power and hit many a home run over the right field fence. He was a batting champ for a number of years and finished his eight-year career with a .400-plus batting average. Granik was an all-Canadian and played on the team that went to Toledo, Ohio, to represent Côte Saint-Luc at the World Championship Tournament.

Salomon, on the other hand, was a Brooklyn-born former Duke University (North Carolina) basketball star, with speed to burn and astar center fielder who could run like a gazelle. He had a lifetime .300batting average and covered center field with the best of them. He also was an all-Canadian and played at Jones Beach in New Yorkand also at Toledo.

Bravo to the organizers of the event. Somewhere up there, Larry and the other alumni who have passed away, were applauding.