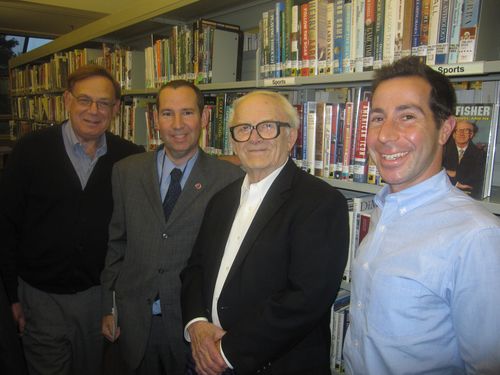 This includes all the books on sports, from hockey to baseball, golf, soccer, etc. The section is quite large and comprises six shelving sections each having six rows.   Red, a long time CSL resident, was on hand to help us unveil the plaque, which sits  in the middle of the section at the top. “I have lived in Côte Saint-Luc for 56 years and I spend a lot of time at this library,” he acknowledged. “I am flattered by this honour.” 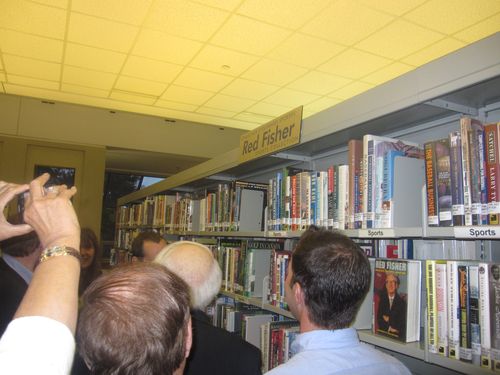 Red just recently retired from his extraordinary  58 year career covering the Montreal Canadiens,  during which time he won  three Canadian National Newspaper Awards and the Elmer Ferguson Memorial Award for distinguished hockey writing from the Hockey Hall of Fame in 1985.

Because Red is such a regular at our library, Mayor Housefather ,  Councillor Sam Goldbloom  and(responsible for the library) and Councillor Allan J. Levine (Red is his constituent)  agreed with my suggestion that we recognize him in such a way. Thanks to Director of Library Services Janine West for coordinating everything. 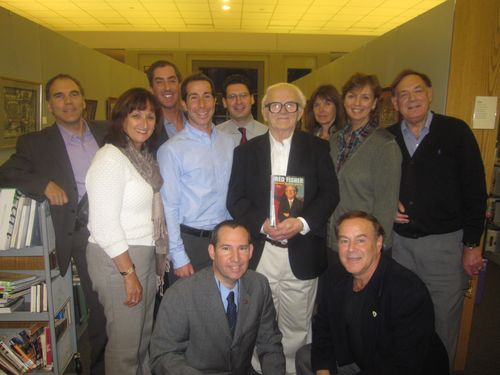 Copies of Hockey Heroes and Me, a book Red wrote, is indeed part of our  sports collection.  I asked Red if he really is retired, given his recent series in The Montreal Gazette about the 1972 Canada-Russia series. He assured me that this is a one-time thing. Having just turned 86, he wants to take it easy.   That being said, he still has a computer and communicates by email.

“Hey Red, I would love to see you start a blog,” I suggested.

Well if anything who deserves a break from the business, it is Red.

Cote St-Luc is at its usual shenanigans... scratching each other's backs, self sanctifying, etc...

Hiya! Quick question that's totally off topic. Do you know how to make your site mobile friendly? My weblog looks weird when viewing from my iphone4. I'm trying to find a template or plugin that might be able to correct this issue. If you have any suggestions, please share. Cheers!

Fantastic goods from you, man. I've be aware your stuff previous to and you are just extremely magnificent. I really like what you've bought here, really like what you are stating and the best way in which you are saying it. You're making it enjoyable and you still take care of to stay it smart. I can't wait to read much more from you. This is really a great website.

Thanks for your marvelous posting! I certainly enjoyed reading it, you might be a great author. I will be sure to bookmark your blog and definitely will come back sometime soon. I want to encourage you continue your great writing, have a nice evening!

Posted by: seo company las vegas Description: Coin a title and description that will boost site visitors not... | October 27, 2013 at 10:04 AM

This is my first time go to see at here and i am genuinely happy to read everthing at one place.

Hi! This post couldn't be written any better! Reading through this post reminds me of my previous room mate! He always kept chatting about this. I will forward this page to him. Pretty sure he will have a good read. Many thanks for sharing!

I've been exploring for a little bit for any high quality articles or weblog posts in this kind of house . Exploring in Yahoo I ultimately stumbled upon this site. Studying this information So i'm glad to show that I have an incredibly good uncanny feeling I discovered just what I needed. I most indubitably will make sure to do not disregard this website and give it a look regularly.

Heya! I know this is somewhat off-topic however I needed to ask. Does running a well-established website like yours require a massive amount work? I'm brand new to writing a blog however I do write in my journal every day. I'd like to start a blog so I can share my own experience and views online. Please let me know if you have any kind of ideas or tips for new aspiring bloggers. Thankyou!

These are truly great ideas in about blogging. You have touched some nice things here. Any way keep up wrinting.

It's amazing to pay a quick visit this web site and reading the views of all friends regarding this post, while I am also zealous of getting know-how.

I do not even understand how I finished up right here, however I assumed this post was once good. I don't understand who you are but certainly you're going to a well-known blogger for those who are not already. Cheers!

I am actually pleased to read this weblog posts which includes tons of helpful information, thanks for providing these information.

Hmm it appears like your website ate my first comment (it was extremely long) so I guess I'll just sum it up what I submitted and say, I'm thoroughly enjoying your blog. I as well am an aspiring blog blogger but I'm still new to everything. Do you have any suggestions for inexperienced blog writers? I'd certainly appreciate it.

Article writing is also a fun, if you be acquainted with after that you can write or else it is difficult to write.

I like the helpful information you provide in your articles. I will bookmark your blog and check again here frequently. I'm quite sure I will learn many new stuff right here! Best of luck for the next!

Hi! This is kind of off topic but I need some advice from an established blog. Is it very difficult to set up your own blog? I'm not very techincal but I can figure things out pretty fast. I'm thinking about making my own but I'm not sure where to begin. Do you have any points or suggestions? Thank you

Unquestionably believe that which you said. Your favorite reason seemed to be on the internet the simplest thing to be aware of. I say to you, I definitely get annoyed while people consider worries that they just do not know about. You managed to hit the nail upon the top and also defined out the whole thing without having side effect , people can take a signal. Will likely be back to get more. Thanks

continuously i used to read smaller articles which as well clear their motive, and that is also happening with this piece of writing which I am reading at this time.

Its such as you read my mind! You seem to know so much about this, like you wrote the ebook in it or something. I believe that you just can do with some % to pressure the message house a little bit, but instead of that, that is great blog. An excellent read. I'll definitely be back.

It's truly a great and useful piece of information. I'm satisfied that you just shared this helpful info with us. Please stay us informed like this. Thank you for sharing.

This information is worth everyone's attention. When can I find out more?

We stumbled over here from a different web page and thought I might check things out. I like what I see so now i'm following you. Look forward to going over your web page yet again.

I simply bought into the hype of the ad and purchased this overpriced product without any thought of side effects or anything else. She mentioned the importance of this in weight reduction because lean muscle burns 50 calories per pound whereas fat only burns 3 calories. In addition, these residents have understood the various health benefits of this fruit.