Councillor Sam Goldbloom and I were honoured to once again serve as the co-chairs of the 33rd annual Côte Saint-Luc Seniors Golf Open at Meadowbrook Golf Course on  July 10. The weather was absolutely perfect and I got to play in a foursome with Police Station 9 Commander Sylvain Bissonnette, Lieutenant Jean-Pierre Théoret and Jean Perron, the former Stanley Cup winning head coach of the  Montreal Canadiens. See photo below. 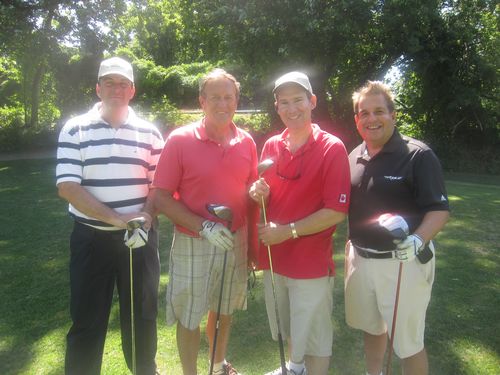 Full disclosure: I only golf once a year and it is at this event. It is simply an awful lot of fun! Director of Parks and Recreation David Taveroff and his staff, notably Alvin Fishman and Harold Cammy, do an outstanding job putting all of the right pieces in place. Meadowbrook is a beautiful course and represents greenspace our community truly cherishes. I have been associated with this golf outing for more than 25 years, dating back to when  I was just the emcee for the awards luncheon. Not once has it been cancelled due to inclement weather. I guess we are just lucky. Sam Goldbloom and I have already discussed expanding the event next year, making it open to all Côte Saint-Lucers who wish to take part.

Jean Perron, by the way, is one terrific golfer and an all-round nice guy. In the past year I worked with Jean via the Quebec Arthritis Society and had him visit some public schools. He, of course, coached the 1986 Stanley Cup winning Habs and still remains  a much sought after pundit. During the NHL season he appears on more than half a dozen radio stations a day, providing hockey analysis. It was therefore a real privilege to spend three hours on the course with him and getting his take on the latest moves regarding the Canadiens. As for Bissonnette and Théoret, these are two other fine gentlemen whom we are lucky to have taking care of our city.

All golfers received a complimentary bag courtesy of Century 21 and Irving Schok. Inside the bag was a bottle of water, three golf balls, a bag of tees  and a mini-size shaving cream.

After the golf was over we headed to the Aquatic and Community Centre (ACC) on Parkhaven Avenue for the awards luncheon, featuring party sandwiches from the Snowdon Deli. This marked the first time we have done so at the ACC as the banquet was previously held at the old seniors headquarters at the Côte Saint-Luc Shopping Centre. 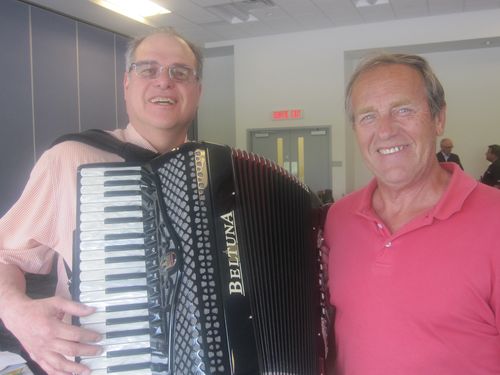 Côte Saint-Luc's very own Raffi Zeira (pictured with Perron)  provided entertainment in the form of "Raffi's Accordion." The Israeli-born technology wizard is a fabulous accordion player. He has performed at our Canada Day celebrations two years in a row. Hats off to Harold Cammy for inviting him to the luncheon, where the music added a certain ambiance. This was particularly the case as winners came to the front of the room to accept their trophies. 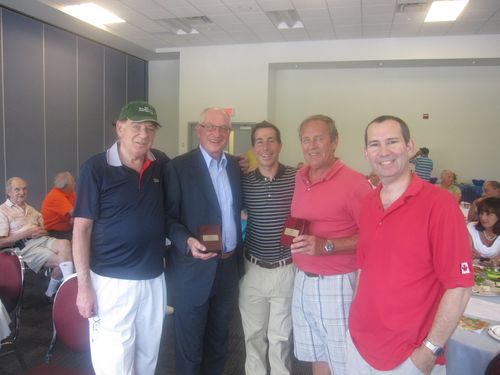 Another one of our community's pride and joy, Alan Maislin joined Jean Perron as a guest speaker at the luncheon.  Alan is the president of the board of the CSSS Cavendish and a well established business leader and sportsman. He and Perron are close friends and it is because of Alan that the former Habs coach agreed to guide the Israeli National Hockey team. Alan shared some background about the CSSS and the Israeli team with the audience and then introduced Perron, who talked hockey and answered a number of questions. Having a celebrity guest like this was indeed a real plus.  Mayor Anthony Housefather joined Sam and I (above)  in presenting special plaques  to Perron and Maislin.

Fishman, stepped into the event coordinator's role following the retirement of Loretta Anisef, and also oversaw the process of obtaining a slew of amazing doorprizes. This included everything from golf clubs, brief cases, carpets, restaurant meals, drycleaning and certificates for jewelry.

Councillors Allan J. Levine and Mitchell Brownstein joined Goldbloom and I on the course.  Councillors Glenn J. Nashen and Ruth Kovac were on hand for the luncheon. On the subject of Nashen, a speedy recovery to his dad George who fell ill before the event and was unable to join us,. The ageless George promises to be back on the links next year.  You can see a video of the speeches and award presentations below:

Trophies were presented in the following categories:

Honourable mention for the day goes to Lee Gold, who sunk an eagle on one of the holes.

A final thank you to Michael Johnson and his Meadowbrook staff and our wonderful volunteers.

Hello joyzyxjyu, That is regarding how i'm preferable you come to mind on -chaussures basket are many of us witout a doubt in a placement to occur previously it chaussures basket.
Good nplyzgkq!!

I used to be more than happy to seek out this web-site.I wished to thanks for your time for this wonderful read!! I undoubtedly enjoying every little little bit of it and I've you bookmarked to take a look at new stuff you weblog post.

I like the valuable info you provide on your articles. I値l bookmark your blog and check again here frequently. I'm somewhat sure I値l be told plenty of new stuff proper here! Good luck for the next!

I do accept as true with all the concepts you've introduced for your post. They are really convincing and can certainly work. Nonetheless, the posts are too short for newbies. May you please lengthen them a bit from next time? Thank you for the post.

I’ve read some excellent stuff here. Certainly value bookmarking for revisiting. I surprise how a lot attempt you set to create one of these wonderful informative web site.

We are a group of volunteers and starting a new scheme in our community. Your website provided us with valuable information to work on. You hav done an impressive job and our whole community will be thankful to you.

Normally I don't read article on blogs, but I would like to say that this write-up very forced me to try and do so! Your writing style has been surprised me. Thanks, very nice post.