Students from three public high schools and one Jewish day school got an authentic lesson in history recently when Montreal commemorations for the 100th anniversary of  Raoul Wallenberg were kicked off. I was pleased to co-chair this program with fellow city councillor Allan J. Levine. 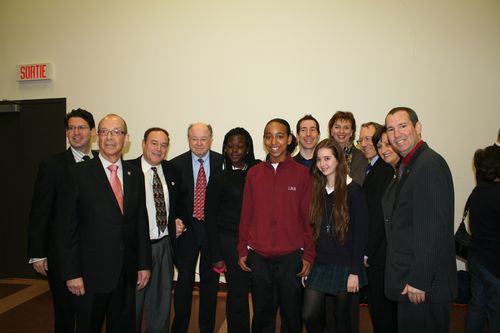 Bialik High School hosted the program, with students from Marymount Academy, LaurenHill Academy, Westmount High School and a distinguished list of speakers in attendance. After Alice Herscovitch, executive director of the Montreal Holocaust Memorial Centre, showed a video testimonial of a survivor whose life was saved by Wallenberg she followed that up by introducing that individual – Ron Meisels – in the audience. Meisels was overcome with emotion having watched the clip, remembering the day when Wallenberg granted Swedish passports for his family and countless others.

“My stepfather was on a train destined for a Nazi death camp,” Meisels explained. “Wallenberg stopped that train, got him off and saved his life.”

The Consulate General of the State of Israel, in conjunction with the Montreal Holocaust Memorial Centre, the Riva and Thomas O. Hecht Scholarship Program, Teaching of the Holocaust for Educators, the City of Côte Saint-Luc, the English Montreal School Board and the Office of Mount Royal Liberal Member of Parliament Irwin Cotler, teamed up for the event.

Wallenberg was the Swedish diplomat who saved the lives of tens of thousands of Hungarian Jews during the Holocaust. While serving as Swedish envoy in the Hungarian capital, Budapest, from July 1944, Wallenberg gave Jews Swedish travel documents and set up safe houses for them. He is also credited with dissuading German officers from massacring the 70,000 inhabitants of the city’s ghetto.

The Nazis, who occupied Hungary in early 1944, launched mass deportations of Hungarian Jews to concentration camps such as Auschwitz with the collaboration of local authorities. Wallenberg disappeared after being arrested in Hungary by the Soviet Red Army in 1945. The Russians have said he was executed on July 17, 1947, but unverified witness accounts and newly uncovered evidence suggest he may have lived beyond that date.

Israel Consul General for Quebec and the Atlantic Provinces, Joel Lion, announced plans for a Raoul Wallenberg Legacy Competition Project. Students from across Quebec will be asked in the fall to produce three minute videos showing how the legacy of Wallenberg is still relative today. Winners of the competition will receive a special certificate and be honoured at a breakfast hosted by the Consul General of Israel in December 2012 followed by a visit to the Montreal Holocaust Museum.

“Who goes on YouTube here?” Israeli Consul General Joël Lion asked. “We want to put your videos about Raoul Wallenberg on YouTube.”

The legacy of Wallenberg will also be marked by the Montreal Holocaust Memorial Centre during their Holocaust Education Series next fall. On May 23 (5:30 p.m.) the Raoul Wallenberg Foundation of Montreal will hold a commemoration at the Monument at Raoul Wallenberg Square (600 de Maisonneuve).

Côte Saint-Luc Mayor Anthony Housefather urged students to visit the city’s Human Rights Walkway at Pierre Elliott Trudeau Park, where Wallenberg had been inducted a number of years ago.

Liberal MP for Mount Royal Irwin Cotler, considered to be one of the world’s foremost authorities on Wallenberg, noted that the former diplomat became the first honourary citizen of Canada. “He was a Swedish non-Jew who saved more Jewish lives than any single government,” Cotler said.

D’Arcy McGee Liberal MNA Lawrence Bergman drew a parallel between what Wallenberg did and things students experience in today’s society. “Do not remain silence in the face of bullying, racism and antisemitism,” he warned.

Thomas O. Hecht spoke about how Wallenberg came from a wealth family, yet put his own life in harm’s way.   Peter Rona from the Raoul Wallenberg Foundation told everyone he would not be here today was it not for Wallenberg. “My father was one of those people he saved,” he shared.

Posted at 12:38 AM in Holocaust Remembrance | Permalink | Comments (5)

The City of Côte Saint-Luc and the Brigadier Frederick Kisch Branch 97 of the Royal Canadian Legion organize the V-E Day event, which commemorates the victory of the Allies over Nazi Germany.

Victory in Europe (V-E) Day was May 8, 1945, the date when the Second World War Allies formally accepted the unconditional surrender of the armed forces of Nazi Germany. The cenotaph at Veterans Park honours the memory of those who gave their lives in the First World War, the Second World War and the Korean WaMonster Beats Headphones

with superior bass design, which in addition to the standard black version, but also introduced a red limited edition, this is extremely rare in the high-end headphones.

The group splintered from Voina, an underground Russian art collective with more than 60 members that is known for provocative street performances that authorities have deemed criminal.

It emerges in conjunction with all the state's regular below-market-rate mortgage program operated from the Connecticut Housing Finance Authority my website the apr is surely an excellent fact to look for your high quality from a unsecured guarantor loan.