One of the things I have really appreciated since first being elected to city council in 2005 is the close relationship Côte Saint-Luc has with Community Police Station 9.  We have a wonderful connection with Commander Sylvain Bissonnette, a prince of a human being, and we know most of his inner circle. Police Station 9 covers CSL, Hampstead and Montreal West. Neighbouring Police Station 11 covers N.D.G.à

On May 22, the two stations joined together to host a fundraising breakfast at Cora on St. Jacques Street West to benefit Special Olympics Quebec, enriching the lives of individuals with an intellectual disability through sport. For $7 we got a full course breakfast and the chance to chat with our police officers. More than $4,000 was raised. 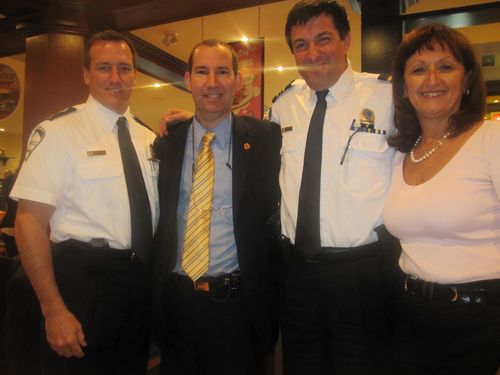 Roxanne Pitre , the commander of Station 11, was there. So was one of her officers, Mira Levesque who helped initiate the project. Marie-Christine Nobert, the veteran socio-cultural officer at Station 9m was her usual charming self. Marie-Christine works closely with the schools and community groups. CSL City Manager Tanya Abramovitch, Legal Counsel Cheri Bell, Diector of Public Safety Jordy Reichson and Councillors Glenn J.  Nashen and Ruth Kovac were among those on hand. It was an enjoyable morning.  Commander Bissonnette introduced me to Patrick Lalonde, who is an assistant director of the Montreal Police Department and a head of regional operations. 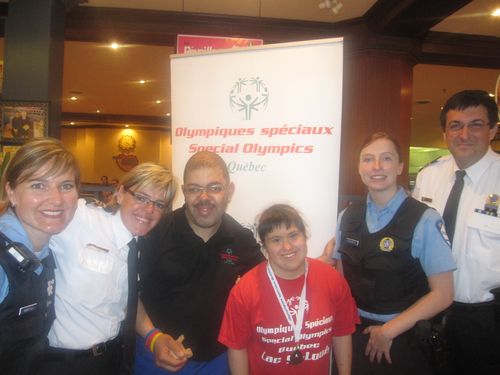 I also shared a moment with Jessica Ipekian Levitt and David Allan, two of the Special Olympians who were helping show people to tables and serve.

Bravo to everyone involved!

“A lot of credit certainly goes to Bikini Kill and the bands in the Riot Grrrl act. We somehow developed what they did in the 1990s, although in an absolutely different context and with an exaggerated political stance, which leads to all of our performances being illegal. We’ll never give a gig in a club or in any special musical space,” said one member, only known as Garadzha.

Howdy! I know this is kinda off topic however , I'd figured I'd ask. Would you be interested in exchanging links or maybe guest writing a blog article or vice-versa? My site goes over a lot of the same subjects as yours and I believe we could greatly benefit from each other. If you're interested feel free to send me an email. I look forward to hearing from you! Great blog by the way!

I don't leave many responses, but i did a few searching and wound up here MikeCohen.ca: Police hold fundraising breakfast for Special Olympics. And I do have a couple of questions for you if it's allright. Could it be simply me or does it appear like a few of these responses come across as if they are coming from brain dead folks? :-P And, if you are writing on other places, I'd like to keep up with anything fresh you have to post. Could you list of all of your public sites like your linkedin profile, Facebook page or twitter feed?

Thanks designed for sharing such a fastidious opinion, article is nice, thats why i have read it entirely

Thanks for ones marvelous posting! I seriously enjoyed reading it, you can be a great author.I will be sure to bookmark your blog and definitely will come back in the future. I want to encourage continue your great writing, have a nice evening!

What's Going down i am new to this, I stumbled upon this I have found It positively helpful and it has aided me out loads. I'm hoping to contribute & assist different customers like its aided me. Great job.

So-called Do It-yourself kits are becoming really affordable choices with, like, solar panel costs of just couple of hundred dollars. Bonus is that it can be readily achieved by your self.

I'm now not sure the place you're getting your info, but good topic. I needs to spend some time studying much more or understanding more. Thank you for great information I used to be lookling for this information for my mission.

A person essentially assist to make severely posts I would state. That is the very first time I frequented your web page and to this point? I amazed with the research you made to make this actual submit incredible. Fantastic job!

Hey! Do you know if they make any plugins to help with SEO? I'm trying to get my blog to rank for some targeted keywords but I'm not seeing very good success. If you know of any please share. Cheers!

Hi this is somewhat of off topic but I was wanting to know if blogs use WYSIWYG editors or if you have to manually code with HTML. I'm starting a blog soon but have no coding experience so I wanted to get advice from someone with experience. Any help would be greatly appreciated!

This design is steller! You definitely know how to keep a reader entertained. Between your wit and your videos, I was almost moved to start my own blog (well, almost...HaHa!) Excellent job. I really enjoyed what you had to say, and more than that, how you presented it. Too cool!

Searcjing around ffor a loan which will be suitable for yyou can be a challenge, that’s were ouur easy too examine finest buy table can help. You can quickly compare information such as merchandise, supplier, representative APR, complete sum repayable and reguar reimbursements to obtain the loan that’s right for you - it’s tha easy! You might also wish too aassess homeowner loans through us iif you're a homeowner. Our easy-to-use sort will ask you just how much you wish to borrow and the time - figures that you can quickly alter to weigh up your choices. The webpage then gifts the loans offered, with key home elevators each product like the rate of interest, lender (APR), month-to-month repayment amount and total repayment due. compare loans rates Why do I need a loan? There are a variety of reasons why you could want to use money. It may be that there’s a new car you’ve got your attention on, or you need to buy a marriage. Regardless of the circumstances, an individual loan can be an easy method of getting a lump-sum easily. When you choose the deal you are enthusiastic about you'll be asked additional quextions including the reason for the loan, your employment and marriage status, gross annual home revenue, whether you're a homeowner and if you've a bad credit history. This allows ouur smart search facility to exhibit yyou whihh bargains you are likely to bbe recognised for, limiting the risk oof damaging your credit rating by having a loan application turned down. What's a collateralized loan? If you are a homeowner, you can secure a loan against your house. The interest rates on secured loans are often lower as the lender can sell the house in case you default on your debt. Nevertheless the costs on secured loans tend to be high. And would you like to place your house at an increased risk for that reason of a fresh automatic washer? Is actually a attached loan right for me? Secured loans could be of use if you need to borrow greater quantities over a lengthier period of time, or if you have an inadequate credit score and can not obtain a great deal on an unsecured loan. However it is vital that you maintain the payments or you could lose your home. Could I consolidate my debts into one loan? home loan comparison table (soup.io) If you've several debts with various lenders, you might want to take-out an individual loan to negotiate your borrowings. A relief loan can make it better to manage finances while yyou must make only 1 monthly payment. It may actually be cheaper while you may be able to prepare a lower interest-rate. But remember to pay-off your present loans and slice up any credit cards straight-away so you aren't tempted to operate up more obligations. Likewise, you generally pay more in total with a combination loan because you are usually borrowing a larger quantity over an extended period. Loans can be found for a massive selection of applications and the right one for you will rely on your own personal circumstances. Learn more about the options by studying our instructions, where you will also discover the solutions to frequently asked questions. Be aware of committed pages on individual, home-owner, secured, bad credit and debt consolidation loans.

Heya i'm for the first time here. I found this board and I find It really useful & it helped me out a lot. I hope to give something back and help others like you aided me.

My developer is trying to convince me to move to .net from PHP. I hage always disliked the idea because of tthe costs. But he's tryiong none the less. I've bbeen using WordPress on various websites for about a year and amm worrieed about switching to another platform. I have heard good things about blogengine.net. Is there a way I caan transfer aall my wordpress content into it? Any kind of heslp would be really appreciated!

Fantastic goods from you, man. I've understand your stuff previous to and you are just extremely magnificent. I actually like what you've acquired here, really like what you're saying and the way in which you say it. You make it entertaining and you still care for to keep it wise. I can't wait to read far more from you. This is actually a great website.

I absolutely love your blog and find a llot of your post's to be what precisely I'm looking for. Would you offer guest writers to write content for you personally? I wouldn't mind writing a post or elaborating on most of the subjects you write about here. Again, awesome web site!