Lawrence Bergman made it official last week. With a standing room only crowd cheering his every move at the Adath-Israel Poale Zedek Congregation in Hampstead, he was confirmed as the candidate for the riding of D’Arcy McGee. District 2 resident Martin Bogante presided over the festive evening in his capacity as riding president, a position he has held since Bergman first got elected 18 years ago. Below Bergman greets one-time riding MNA and cabinet minister Dr. Victor Goldbloom and his wife Sheila. 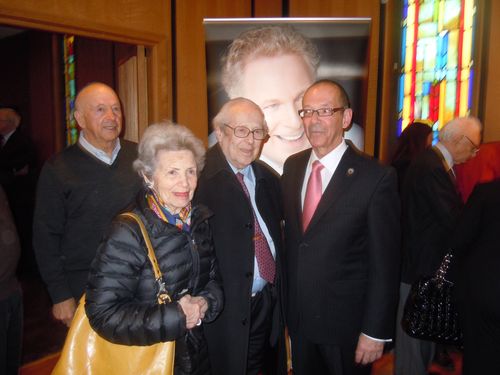 Commonly referred to as Quebec’s de facto Minister of Jewish Affairs, Bergman says he never contemplated retirement even as he approaches his 72nd birthday. The next Quebec election, which many predict could be called before June, will be Bergman’s sixth. He first took office in 1994, regaining the riding for the Liberals after Robert Libman wrested it away in 1989 for the former Equality Party. This was a time when the English-speaking community wanted to send a message to the Liberals for the way in which they were handling the language laws.

Libman ran again in ’94 as an independent against Bergman, a notary who at the time was the president of Adath-Israel Poale Seek. Bergman won the election and over the past 18 years has gained a reputation for being the “go to” man for any issue affecting the Jewish community. He served in Premier Jean Charest’s cabinet as Minister of Revenue and for the past three and a half years he has been the chairman of the government caucus. This gives him access to the premier at least once a week for 90 minutes and to all of the members of cabinet.

“We are now in our 18th year in office,” Bergman told the crowd. “For Jewish people, 18 is Chai: Chai is life, Chai is inspiration and Chai is optimism.”

Bergman recalled his highlight as an MNA. It occurred in December 1999 when the  Liberals were in opposition and he proposed Bill 198 which gave official recognition to Yom Hashoah. “If you add one, plus nine, plus eight it also comes to 18 and Chai,” Bergman explained. “Just before the vote, then Parti Québecois Premier Lucien Bouchard crossed the floor to speak to Jean Charest. He said that he wanted a member of his party to sign their name so this could be a united effort. My proudest moment was seeing all 125 MNAs stand up and vote to recognize Yom Hashoah.”

Minister Bolduc pointed to the more than $400 million the government has awarded to the Jewish General Hospital to expand its services, noting that Bergman’s  efforts played a crucial role in this becoming a reality. “It is important to have a guy like him,” Bolduc said. “When we talk about the Jewish community, we always get the opinion of Lawrence.”

Bogante emphasized that a number of years ago D’Arcy McGee was in danger of being wiped off the electoral map. “But Lawrence stopped that from happening,” he said.

I joined Mayor Anthony Housefather and several members of council at the nomination meeting. Hampstead Mayor William Steinberg and his council were there as well. We all agree that Lawrence Bergman has been a truly excellent MNA, one who has always been there for us in a time of need. When the demerger process took place and we were in jeopardy of losing our Emergency Medical Services (EMS), Lawrence stepped in and prevented that from happening. As we proceeded to build our $18 million Aquatic and Community Centre, the provincial funding that was necessary to see this project through was acquired thanks in large part to Lawrence. He even brought the Provincial Minister of Municipal Affairs here not once, but twice: for the construction announcement and for a tour of the actual facility when it was inaugurated.

Thank you Lawrence and we wish you many more years in office!

@@ each kid is the gift sent by the god

The Liberals are no friends to Anglophone Quebecers.

I think you write this article article was really too good! Give me a lot of help. Hope to write better work!

Nice post, great detail. I would have liked to see the costs that are associated to it so I could add to my business case justifications to use the technology. Keep up the good work!

Once you secure a job then you will be offered numerous live projects. You will certainly be evaluated on the basis of these projects

Way cool! Some extremely valid points! I appreciate you writing this write-up plus the rest of the website is very good.