More than 10,000 people, Jews and non-Jews alike, gathered in downtown Montreal on April 26 for the annual Yom Ha’atzmaut Solidarity Rally. Weather conditions were ideal as a march began from Phillips Square, leading to the large open space of Place du Canada. Dozens of school buses lined the side streets, having transported students and citizens from across the island. 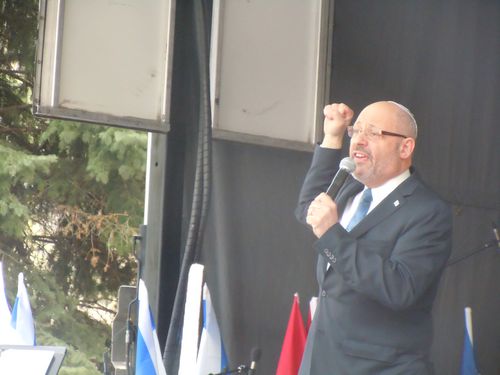 The Jewish Unity Partnership, headed by Côte Saint-Luc businessman Amos Sochaczevski, once again spearheaded this lively event which included very few speeches but lots of singing and dancing.  Charismatic Joel Lion (right), the Consul General of Israel for Quebec and the Atlantic Provinces who lives in CSL, was the first to address the crowd.  Taking the microphone in hand he walked across the stage and in French urged everyone to cheer loudly for the State of Israel. He introduced a videotaped message from Israeli Premier Benjamin Netanyahu, which was delivered on a crystal clear portable screen on wheels with perfect sound. The audience responded with great appreciation when he specifically recognized Montreal.

Senator Leo Housakos represented the government of Canada. Housakos lauded Israel as a democracy and an example for other countries in the Middle East to follow. He  acknowledged the attendance of  Thanos Kafopoulos, the Consul General of Greece in Quebec (below with Joel Lion), as well as leaders of the province’s Hellenic community.  He then directed the audience once more to the big screen for a well received message by Prime Minister Stephen Harper, who remains very popular with the local Jewish community. Mount Royal Liberal MP and CSL resident  Irwin Cotler and Westmount-Ville Marie Liberal MP Marc Garneau were in attendance as well. The City of Montreal and a number of municipalities were represented. From CSL city council, myself, MItchell Brownstein, Dida Berku, Glenn J. Nashen  and Sam Goldbloom were on hand. 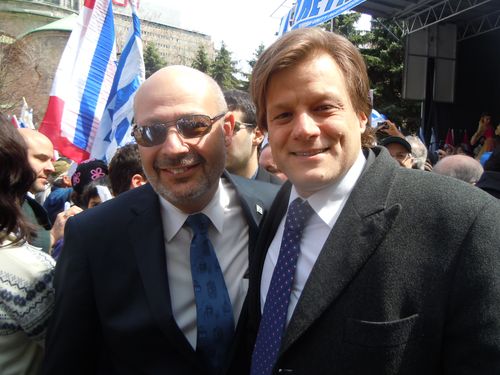 Music was provided by local artists, along with a group from Kiryat Atta in Israel.

The same day as the rally, Consul General Lion published an opinion piece in the The Montreal Gazette.  “Think ‘Israel’ and what comes to mind?” he asked in the opening sentence. “It's a good question to ask on Israel's Independence Day, when the Israel Day rally takes place in Montreal. The first thing most readers will think of is my country's decades-long conflict with the Palestinians. To others, the mere mention of Israel conjures up images of a mystic land promised to the Israelites by none other than God himself. And some see Israel as an exotic land somewhere far, far away - a place where nomadic tribes shepherd their camels through dunes as far as the eye can see.

“When I think of Israel, I see my home, a land that is as vibrant and diverse as it is creative. Every time I land at Ben Gurion Airport after a long sojourn abroad, I am amazed at how much Israel has changed in my own lifetime. From our humble rebirth in the tragic aftermath of the Holocaust, we have, in just 64 years, evolved from a largely agrarian nation of the Third World to a developed nation. Whereas Israel was once the land of Jaffa oranges and raisins, today it is - as one New York Times bestseller coined it - the ‘Start-up Nation’ the land of Intel microchips and nanotechnology.” 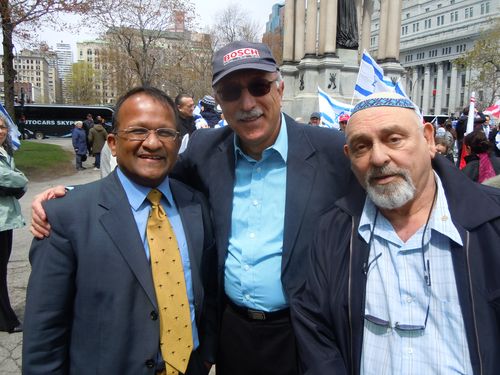 In just over six decades, Lion noted that the Israeli population has grown more than nine fold, from roughly 800,000 in 1948 to just over 7.8 million today. “With immigrants and refugees from 120 countries and an Arab minority numbering about 20 per cent of the population, Israelis are proud to celebrate our different ethnic backgrounds, languages and traditions,” he stated.  “We are equally proud of our country's thriving democracy and robust society.”

Lion concluded by noting how Israel shares the Palestinian people's dream of statehood.”That dream, however, must be based on the principle of two states for two peoples - one state for the Jewish people and another for the Palestinian people - and not of one state on the ashes of the other,” he said “The first step is to sit down face to face. If Israel has accomplished so much in 64 years without peace, just think what Israelis, Palestinians and the region as a whole could accomplish with it.”

I spoke with many other CSL residents at the event. This included the great Harry Kloda, who provided the sound  and stage; CSL Senior Men's Club president Sidney Margles and newly appointed Canadian Institute for Jewish Research senior executive Jacob Kincler, pictured above with St. Laurent Borough Mayor Alan DeSousa and photographer Joseph Zagury. Below, there I am in the crowd with Hampstead Councillor Harvey "Safer With " Schaffer and Cotler. Thanks to Dida Berku for that photo. 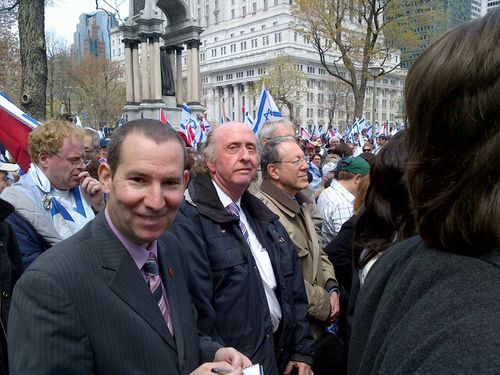 Bravo to Amos Sochaczevski and his team.

Instead of releasing its music through traditional methods, Pussy Riot is more focused on uploading viral videos of its performances. To date, the group has released six songs.

It's a shame you don't have a donate button! I'd without a doubt donate to this brilliant blog! I guess for now i'll settle for bookmarking and adding your RSS feed to my Google account. I look forward to fresh updates and will share this blog with my Facebook group. Talk soon!

What about the reduction in weight of the indoor hot tub. Actually most hot tub business owners I know are passionate about having the greenest, best the the the water and move it to another drain or outside on the ground. For those who are not foxboro hot tubs zip using the hot tubs unsafe to use, all you need to soak that filter overnight in dedicated filter sanitizer. Cover not only keeps your hot tub and splash about in the wonderfully warm foxboro hot tubs zip water.