For years now residents of Marc Chagall Avenue, particularly those living in Le Marquise and Le Chagall high rise condominiums, have been asking me to do something about the snow dump facing their homes. Sure, in an ideal world they would like to see it relocated somewhere else but that is not an option. 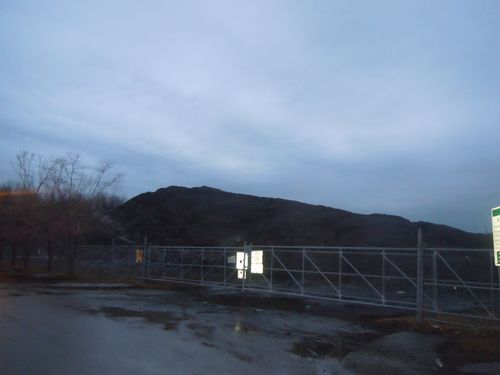 Even during a mild winter like the one we are having this year, the filthy hill of snow gets pretty high. Generally, we do not see it disappear completely until the end of the summer.
Residents have asked repeatedly for us to help speed this along. The matter has been raised with council, but there was not a will by the majority to pay for the special equipment.

I am happy to report that at the March 12 public council meeting a motion was approved for the city to award a contract for a springtime bulldozer with an operator to J. Richard Gauthier Inc. for the price of $124.95/hour, up to a maximum amount of $10,000 plus applicable taxes to break up the snow.

Not only is there is aesthetic problem with the snow dump, it is also dangerous. Last summer, as hundreds of people lined the street of  Marc Chagall to listen to the U2 concert at the Hippodrome, we saw people climbing over the fence and walking up the snow dump hill. I had to call Public Security on several occasions to get these people down.

The  snow hill also attracts different birds and wild animals, from raccoons to even coyotes.
I wish to thank Mayor Anthony Housefather for his strong support on this matter. He agreed to put the $10,000 in our 2012 budget. We needed five votes for this to pass.  Besides myself, Councillors Allan J. Levine, Sam Goldbloom and Mitchell Brownstein supported the motion. It was a 4-4 tie and the mayor cast the deciding vote.

Here is what was said at my District 2 meeting last June:

A main topic of discussion at the meeting was the height of snow dump on Marc Chagall Avenue. Dr. Paul Weinstein, who resides at Le Marquise next door, said that he is less concerned about the aesthetics than the amount of garbage there which he fears can spread disease. He also said that the state of the dump is leading to increased pigeon droppings on balconies.

Dr. Harry Shizgal and others asked whether we could try to bring in equipment to cut down the size of the hill. I have asked for this to be done, but Steven  Erdelyi   explained that for budgetary reasons the city will likely wait until the snow melts. Dr. Weinstein asked that we investigate any alternative options which perhaps were not looked at in the past such as covering the hill with something to make it melt quicker.

There is no way a snow dump should be located anywhere near where people live. I live across from that eyesore, and every spring what is almost surely toxic water seeps into our parking garage as a result of the melting snow.

It is happening again this year. When was the last time you checked out the new construction project on Marc Chagall? The thing is literally being built on swampland. If I shelled out half a million for one of those things, I would be deeply concerned. There is no way that water from that snow dump will not end up seeping into those basements in the coming years.

Great loved it, will be waiting for your future posts Thank you for sharing.

That canvas trousers made later simply called genoese. "Jeans," later evolved into such a solid, durable jeans came into being.