Phil Matlin impressive on the piano

In an unprecedented Jewish sports spectacle which now promises to become an annual affair, the first Kiddush Cup took place February 12 at the Bell Centre – home to the  Montreal Canadiens – and featured teams representing the Beth Israel Beth Aaron Congregation  (BIBA) and Tifereth Beth David Jerusalem Congregation TBDJ ended up winning a hard fought 6-5  decision, but it was the thousands of dollars raised for youth programming and community events for  the two City of Côte Saint-Luc synagogues which was the most important result.

I would like to thank Martin Banoon Photography for some of the excellent shots here of the BIBA and TBDJ teams and of the opening ceremony.

The idea of the Kiddush Cup was conceived by Lawrence Witt, president of BIBA and a lawyer with the firm Heenan Blaikie and TBDJ vice-president Judah Aspler. Each player paid an unidentified fee to play. Funds also came in via ticket sales, silent auction bids, event sponsors and a family skate on the Bell Centre ice. Michel Lacroix, the true Canadiens public address announcer, introduced the starting lineup. They even had the familiar organ music in the background. Rabbis Reuben J. Poupko and Chaim Steinmetz of BIBA and TBDJ respectively served as coaches. The event co-chairs were Ted Quint and Warren Greenstone of  TBDJ and David Diner and Alex Feld from BIBA.

Witt joked that even though BIBA was on the short end of the 6-5 loss, he plans on making a few minor off-season acquisitions to ensure that his club sips from the coveted Kiddush Cup after the 2013 rematch. “Next year, we may even produce a Jewish version of "24/6 - The Road to the Kiddush Cup," he said in reference to the popular HBO  documentary which follows  NHL teams participating in the outdoor Winter Classic.

Talk has already begun about a possible baseball game between the synagogue’s two teams. “This one will for the Seder Plate,” Witt notes.

“TBDJ came into this inaugural game as the underdogs, but keeping with Jewish  tradition, faith and perseverance turned the story around and into a celebration that will last eight days,” added Aspler, who works for Microsoft. “We have no doubt that BIBA will be gunning for us next year, but we've got a team roadmap that will secure our hold on the coveted Kiddush Cup for generations.” 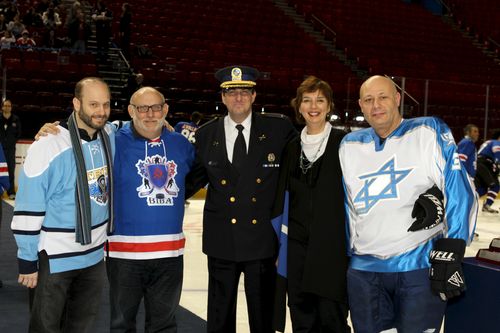 Scoring opened at the five minute mark of the first period with a Witt tip-in of a Russell Samuels shot from the point. TBDJ blew the game open in the second frame with a pair of goals by Evan Ellbogen and singles by Greenstone, Avi Miller, Lorne Svarc and Michael Ziegler. BIBA responded with goals by Jeremy Wallace, Howard Wallace and a pair by Oren Nahoum. BIBA pulled Goalie Jake Singal-Kohn in the last minute for the extra attacker, but Team BIBA was stymied by the stingy TBDJ netminder Shaya "Leather Larceny" Csillag, who drove in from New Jersey to play in the game (and drove back immediately after).
One of the goals went to a video replay but was declared a "good " upon review by referee Mark Gross.

Both teams had a practice last Saturday night Feb. 4th.

"This is was great community event," said Greenstone. "Playing hockey at the Bell Centre was a thrill for everyone involved. The kids who also had the opportunity to play had an amazing time as did all those who participated in the family skate. It was great way to spend a Sunday afternoon."

Team BIBA's honourary captain was Israeli Consul General. Joel Lion. He wore   the Israel National Hockey Team uniform and "played" for BIBA. “It was an amazing experience,” said Rabbi Steinmetz. “Everyone had fun at an enjoyable and competitive game.   Of course I am proud of my coaching - in particular because I know so little about hockey. Now that I am unbeaten I’m working on my coaching memoir entitled: ‘The Rabbi's Way: How Studying the Talmud Can Make You into a Better Hockey Player, or at Least, Into a Better Person.’
We left the Bell Centre with our prayers for the Canadiens’ success.” 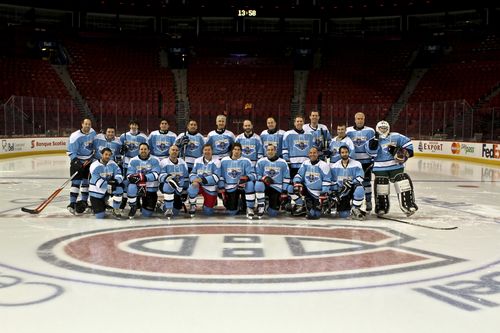 Svarc of TBDJ noted that the funniest moment of the day came when Consul General walked into the locker room and exclaimed ‘On the ice I have diplomatic immunity." He added how every kid who plays hockey dreams of playing in a professional arena. “They really brought out all the stops for the full experience,” he says.

Here are some video clips courtesy of Dida Berku:

I am very proud that my colleagues and I on  Côte Saint-Luc city council have adopted a by-law to expand our  smoking ban to certain outdoor areas.  District 4 Councillor Steven

Erdelyi (pictured) sponsored this piece of legislation, which passed unanimously.The new by-law will ban smoking within 20 meters of children's outdoor playgrounds and near municipal sports fields.   We will also ban smoking in our public parks during special events like Canada Day. For those who break the law, a fine of $50 will be issued for the first offence and $100 if you do so again.

A lot of people will tell you that this by-law will not be easy to enforce. However,  I like the fact that a citizen can now approach a person who is blowing smoke at Pierre Elliott Trudeau Park with young children close by and tell him or her to butt out.

Our city took a leadership role many years ago when the late Eric Helfield sponsored the first anti-smoking by-law. I was a reporter for The Suburban Newspaper  at that time, covering City Hall.

I do not smoke and I have a low tolerance for those who do so around me. I know it is an addiction, but  I do hope that actions like this might prompt some more people to kick the habit.

The City of Côte Saint-Luc adopted a by-law on February 13 to update prohibitions on smoking in public places, continuing the city’s long-time leadership on this health and safety issue.

By-law 2374 entitled By-law to Regulate Smoking in the City of Côte Saint-Luc replaces by-law 2202. Côte Saint-Luc first adopted a by-law prohibiting smoking in April 1985, with updates in June 1997 and March 1999. The Quebec government enacted the Tobacco Act in June 1998, which set out a series of measures aimed at restricting tobacco access, promotion, and use.

“Côte Saint-Luc has always been a leader among municipalities in the area of health and safety,” Mayor Anthony Housefather said. “We decided to broaden the provisions of our existing by-law to add additional locations where smoking was prohibited and this is consistent with actions beginning to be taken by municipalities outside of Quebec.”

The new Côte Saint-Luc by-law adds additional prohibitions against smoking (1) within 20 meters of any playground, splash pool, or sports activity, (2) in all municipal parks during a special event, and (3) at all municipal outdoor pools. A copy of the by-law is available at CoteSaintLuc.org.

“Basically, what this new by-law does is take the rules against smoking one step further,” Councillor Steven Erdelyi said. “Smoking in a public place, even outdoors, is a nuisance for all those close to the smoker. Our new by-law recognizes this and makes it possible for people to better enjoy the outdoors, whether at a child’s soccer game or at large public events like a winter carnival activity.”

The fine for contravening the by-law starts at $50 for a first offence.

There is good news for some residents of District 2.

For many years parking on the southern side of Kildare Road, between Rembrandt and Merrimac,has been prohibited on Tuesdays and Thursdays.

Residents have approached me numerous times to try and get this changed and for various reasons approval was not within reach.

Over the winter I have been working with our head of engineering, Charles Senekal (left),  to come up with a resolution to this problem. Many residents of the condominium town houses on Kildare Road like to leave their cars on the street when they come from work, rather than park in their garage. The city, however, has always needed to allocate some time for street cleaning.

The compromise I have been able to reach, with Mayor Anthony Housefather lending a helpful hand, will see no parking on that strip between 7 a.m. and Noon on Tuesdays and Thursdays. Since most of the residents I spoke to indicate that it is late afternoon when they generally want to park on the street, I believe this is a winning solution. I would like to thank District 5 Councillor Glenn J. Nashen, who as head of the city's Transportation Committee, set the wheels in motion for this development.

We hope the new signage will be up sometime in March.

CSL's population increases 2.9 percent as per Stats Can