Home Categories Posts by email Search
End of an era: Nautilus Plus in Côte Saint-Luc to close
CSL's population increases 2.9 percent as per Stats Can

For the last six plus years as the Côte Saint-Luc city councillor for District 2, I have known Saul and Farla Ettinger (below) as constuents of mine. I was aware of Sau's success in real estate and Farla's involvement in the community.  Somehow, though, I did not know  Saul was a legend in the local restaurant circles. 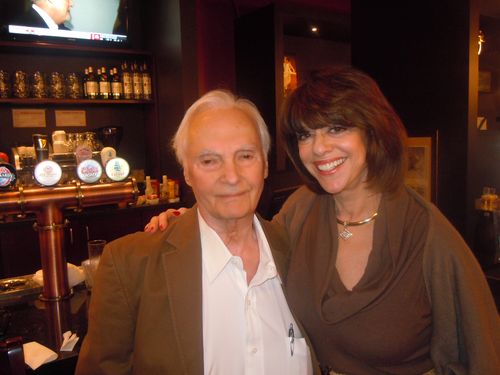 Growing up in this city I loved the smoked  meat the Briskets restaurant  chain while my mouth watered whenever I t hought about a hamburger from Il Etait Un Fois.

For all those folks like me who have longed for a return of these two restaurants, Saul has answered your prayers and revived  them under one roof. Ettingers Deli (www.ettingers.ca) is located at 9100 Newman (corner of Dollard) in LaSalle.

Thirty years ago, Ettinger opened his first Briskets deli on  Bishop Street. Twelve  franchises in Montreal and Ottawa soon followed.  As Saul says, people who remember dining at Briskets described the smoked meat sandwiches as "addictive." Briskets smoked meat was not only homemade, but it was never pumped. “Most smoked meat in Montreal and elsewhere were and still are prepared with briskets that are pumped with phosphates and a preponderance of nitrates and sodium,” Saul explains. “ This pumping technique is used in order to increase profit margins by making the briskets heavier. Strange, isn't it---the government bans the use of phosphates in your dishwasher and laundry detergent, but allows it in food? Briskets' smoked meat was made with unpumped briskets using a tightly-held secret recipe. They were dry-cured the truly old-fashioned way over a period of two to three weeks, producing superior smoked meat---smoked meat that was mouth-watering, and truly addictive.

Briskets smoked meat sandwiches were just about everywhere, be it  the Olympic Stadium concession stands or catered at private parties.   As for Il Etait Un Fois, the classic hamburger spot was located in a standalone building in heart of Old Montreal at a time when it was a relative ghost town, Saul  recalls pioneering  a new phenomenon. While McDonald's was selling burgers for as little as as 60 cents, he decided it was time to introduce Montreal to a gourmet half-pound burger at $5. In those days, the thought of a burger for $5 was ludicrous. Yet, within a short few weeks, Il Etait Un Fois attracted huge line-ups and rave reviews. Saul's burgers were made through a rarely used secret process that turned out the juiciest and most scrumptious burgers in Montreal. And along with mouth-watering burgers and incredible fries, the menu included specialities such as homemade beer-battered onion rings and fish n' chips as well as fried mushrooms and foot-long dogs.

Another of Saul's visions was launched on the Trans Canada. It was and is still called Linguini, an Italian restaurant situated in a rustic log cabin built by Saul on the south side of the 40 just west of Morgan.

For years after Saul retired from the restaurant business, he still hosted dinners and parties where he would serve his amazing smoked meat. Without exception, those who partook in these affairs, would beg him for his recipe and strongly suggested he open up a deli.


Decades after his great restaurant successes, a good friend and protégé, Bob Luxenberg, Saul's step-son, Warren Kleiner, and Warren's best friend, Charles Benedek,  joined forces with the legend and Ettingers was born in a former car dealership facility on Newman. Not only is this a pretty restaurant, with flat screen televisions, comfortable seating and plenty of parking – but it is truly a dream destination for Montreal diners who can experience Briskets and Il Etait Un Fois under one roof.

They officially debuted in November and the soft opening has been a success. AT the ceremonial affair, charismatic LaSalle Borough Mayor Manon Barbe cut the ribbon and special guests got to sample the cuisine. I give a big thumbs up to the smoked meat sandwich and curly fries (with cole slaw) that I had served. One of my colleagues from The Suburban, Melanie Pepin, had troubled finishing her smoked meat sandwich while Associate Publisher Sari Medicoff  was in much the same position with her delicious burger.

I had a chance to sit  down with Saul,  Warren and Charles to get their take on the new restaurant and what the future holds. Could this be a new chain in the making? Take a look:

Unquestionably consider that which you stated. Your favourite justification appeared to be at the internet the simplest thing to take note of. I say to you, I certainly get annoyed even as folks think about worries that they just do not realize about. You controlled to hit the nail upon the top and outlined out the entire thing with no need side-effects , folks can take a signal. Will likely be back to get more. Thanks

Hurrah! After all I got a website from where I can truly get useful data concerning my study and knowledge.