It is not every day that Côte Saint-Luc's Samuel Moskovitch Arena gets a visit from a professional hockey legend. Yet there was Dickie Moore, the former number 12 for the Montreal Canadiens,  on hand to watch the CSL Bantam "A" Canucks take on their competitors from St. Laurent. 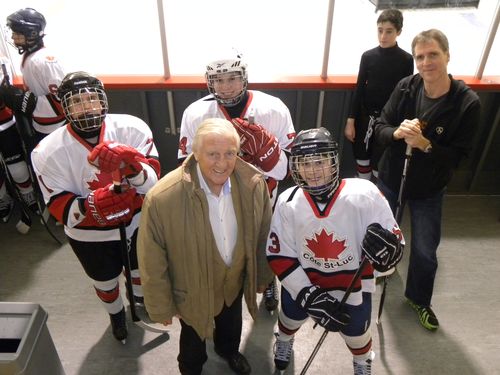 CSL and District 2 resident Steve Stein and his family took Dickie out for dinner on the occasion of the special date that evening: 12/12 - December 12.  Steve's son Mathew is a member of the Canucks, who lost the game 3-2. Dickie was quite the hit, signing autographs and posing for photos.

Here is more about Dickie from the website Our History.

An energetic and tireless left winger, Moore held the record for points in a season for seven years, earning him two Art Ross trophies.

Pride, skill and determination are all attributes that come to mind when Dickie Moore’s name is mentioned. An outstanding all-around player who approached the game with unmatched ferocity, he spent 12 years with the Canadiens, emerging from his time in the hockey world as one of the greatest wingers in Habs history.

A standout junior who played on Memorial Cup Championship teams in both 1949 and 1950, he broke in with the Habs midway through the 1951-52 season and was assigned two veteran linemates. With Elmer Lach at center and Moore’s boyhood idol, Maurice Richard, on the right side, the rookie picked up 33 points in as many games and continued to shine in the postseason.

Injuries kept Moore from full-time duty over the next two seasons but he answered the call come playoff time, showing the fire and the poise of a veteran when the stakes were at their highest. The Habs won the Stanley Cup in 1953 and the subsequent spring, Moore’s 13 points led all playoff scorers.

Toe Blake’s decision to place rookie Henri Richard between Moore and “The Rocket” the following year resulted in a forward line that was one of the NHL’s best for the next nine years.

All three men were among the most combative players the game has ever seen. Maurice Richard was still the most dangerous man in the hockey world from the blue line in. His younger brother had very few peers when it came to carrying and controlling the puck.

Five consecutive Stanley Cups came Montreal’s way as the tough kid from a rough Montreal neighborhood continued to establish himself as a star. Moore had all the tools at his disposal and he used every one of them effectively. He was a strong skater, smooth stickhandler, crisp passer and had a strong accurate shot.

An offensive threat as much as anyone on the roster, Moore’s greatest asset lay in what he didn’t do. The 5-foot-10, 168-pounder refused to back down from anyone and he refused to lose. Whether it was a race for a loose puck, a battle along the boards or a round of fisticuffs, Moore usually emerged victorious.

Moore’s scoring numbers climbed each year and he became a consistent 20-goal scorer, hitting the mark in six of his last seven years with the Canadiens.

Netting 29 goals in 1956-57, Moore tallied three more in the playoffs, including that year’s Cup-winning marker. In 1957-58, his 36 goals and 84 points topped the league and earned him the Art Ross Trophy, a feat Moore accomplished despite playing the last three months of the campaign sporting a cast on his broken wrist.

He repeated as scoring champ in 1958-59, leading the league with 55 helpers and establishing a new league record with his 96 points. Having toppled Gordie Howe’s previous mark, Moore would see his record stand until Bobby Hull surpassed it in 1965-66.

Moore’s body paid the price for his spirited approach to the game but he refused to slow down, playing through injuries that sidelined lesser competitors. After 12 years of rugged play, his body had had enough. Moore retired after the 1962-63 season to concentrate his efforts on his growing business interests, but he couldn’t stay away from the game he loved.

After playing 38 games for Toronto in 1964-65, Moore moved to St. Louis in 1967-68. The 37-year-old went out with a bang, picking up 14 postseason points as the Blues made it to the Finals in their inaugural campaign.

Moore’s on-ice success ranks among the Canadiens top scorers of all-time; his 254 goals and 340 assists place him in 12th and 13th place, respectively. The man who routinely lifted the level of his game in the playoffs, appeared in nine consecutive Finals. He is 10th for all-time postseason points and assists, and ranks ninth for goals.

Dickie Moore was inducted to the Hockey Hall of Fame in 1974. On November 12, 2005, his number “12” was retired and raised to the rafters of the Bell Centre.