Rabbi Reuben J. Poupko, the charismatic spiritual leader of Beth Israel Beth Aaron Congregation in Côte Saint-Luc, is no longer the most eligible bachelor among the local Jewish clergy. He recently walked down the aisle with the gorgeous Mindy Shear, a high profile makeup artist/entrepreneur  in the community. The happy couple are pictured below at their nuptials. 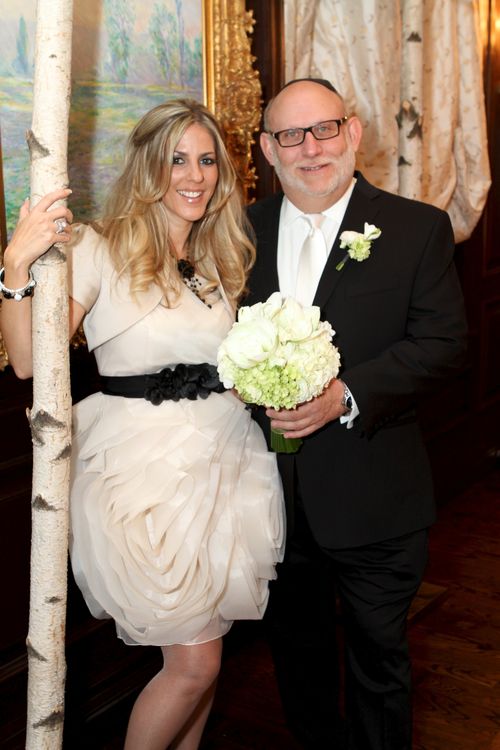 In 1986 Pittsburgh native Rabbi Poupko, then   27, arrived via New York . From the start, everyone who met him knew he was not your average spiritual leader. At the pulpit his tremendous oratory skills, both in praise of Judaism and Torah and in the defence of Zionism and the modern State of Israel, provided audiences with a tremendous lift. He also showed an extraordinary sense of humour, prompting many to suggest he should consider a sideline as a standup comedien. In fact, he got rave reviews for his performance in the nationally televised Schmelvis: The Search for the King’s Jewish Roots, a documentary investigating Elvis Presley’s supposed Jewish roots.

From the moment he arrived in Montreal, students turned to him for guidance and leadership. So did the community at large and over the past 21 years he has served in some high ranking leadership positions. He remains a media darling in this city, with the press constantly at his doorstep for what they know will be a catchy soundbite. He has been on more than a dozen March of the Living trips and visited Israel  more than 100 times.

I have known Mindy since she was a teenager and was part of the  same mission to Israel with her about 20 years ago. That just happened to mark her first trip to the Jewish homeland and from that point on her devotion to Judaism grew. In 1987  she established Mindy Shear Makeup Studio with the aim of bringing superior performance and elegance to the daily ritual of make up. After extensive beauty industry training and of her completion of a fine arts degree, she  set out to approach the make up business with an artist’s eye.  Over the years she  has had the opportunity to work with various actors, models, photographers and fashion designers in different countries.  She now has her own line  of makeup products.

While Rabbi Poupko's five children and  seven grandchildren all live out of town, he now has a new youngster in his life: Mindy's young son Shalev  Shear Yaacov.

"We've known each other for many years as we are both involved in community,"  said Mindy.  "We had a long friendship, but we lost touch for a few years.  About a year ago we ran into each other and went out for dinner to catch up.  Slowly over time, we started spending more time together and our friendship blossomed into a more serious relationship. And the rest is history!"

Good luck to the happy couple!

Wise men learn by other men's mistakes; fools by their own

Mazel Tov! Now that she is becoming a rebbetzin, Rabbi Poupko should have insisted his wife wear a more modest wedding gown, according to Orthodox Jewish law, with sleeves till the elbows, and the dress covering the knees. After all, they are both now a role model for the synagogue they represent, which is orthodox.

The composition of very good. Give me a lot of help, gave me a big inspiration! Hope to continue trying to write something better!

Loose tiger TEE, this loose and big TEE is the Korean version, with the shorts will not feel Oh, the texture of cotton is very comfortable. The eyes of the beholder, I prefer

the SKECHERS every year to buy the leisure section is very good, good quality and comfortable. UGG price is relatively high, a lot of vain people would rather buy a fake, really

You really make it seem so easy with your presentation but I find this topic to be actually something which I think I would never understand. It seems too complex and very broad for me. I'm looking forward for your next post, I will try to get the hang of it!

excellent points altogether, you simply gained a new reader. What might you suggest in regards to your submit that you simply made a few days ago? Any certain?

Hello There. I found your weblog using msn. This is a really smartly written article. I'll make sure to bookmark it and come back to read extra of your useful info. Thanks for the post. I'll certainly return.

I have fun with, lead to I discovered just what I used to be taking a look for. You have ended my 4 day long hunt! God Bless you man. Have a nice day. Bye

An additional superb site is which also provides a wide variety of boots at lovable prices. Jim Christina, a podiatrist and the Director of Scientific Affairs for the American Podiatric Medical Association agree. Genuine cheap UGG, the colors are very positive and as same as official website of UGGs.

Downtown Las Vegas offers its own share of specialty shops, high-end retail, and antique stores tto satisfy your shopping frenzy ixs. It can content you if you choose the best suitable one for you. This is the 2010 version of the famous Predator line.

Heya i am for the first time here. I found this board and I find It really useful & it helped me out much. I hope to give something back and aid others like you aided me.

Fantastic website. A lot of helpful info here. I am sending it to some buddies ans additionally sharing in delicious. And naturally, thanks to your effort!

Someone essentially lend a hand to make critically posts I'd state. That is the very first time I frequented your web page and up to now? I surprised with the research you made to make this particular post amazing. Excellent task!