The end of an era: no more Cavendish "Mall"

As work continues on a new housing development, following last year's demolition of almost half of the Cavendish Mall, here is some breaking news.  Nearly 40 years after it first opened, the Cavendish "Mall" is about to disappear. No, the remaining stores,  food court, movie theatres, offices and CLSC headquarters are not being evicted.  There is a clever name change about to occur. Good bye Cavendish Mall and hello "Quartier" Cavendish.

This all makes a lot of sense. The  "Mall" was operating on  a half empty tank of gasoline for some time until our city council gave the go ahead for demolition and the new housing development. While construction is continuing, we can look forward to a very attractive residential neighbourhood and a shopping centre with no empty storefronts.

I grew up at the Mall, so to see the name disappear is kind of sad.  It will take  some time to get used to saying "Honey, I am going to the Quartier!" Memories of Eaton's, Warshaws, Discus, Canadian Tire, The Gap, Direct Film, Consumer Distributors, Steinberg's, Silverbergs, Kiddie Kobbler, Pumpernik's, the Cattleman and more are now dancing in my head.

Update on the three kittens; and what a twist on their "mom"

Last week I shared with readers of my blog the story of three adorable abandoned kittens near my house in Côte Saint-Luc. As the liaison on city council to the Côte Saint-Luc Cats Committee and our Trap, Neuter and Release  (TNR) program I get a lot of calls from people reporting stray cats and baby kittens looking for a home.  I generally report these to Shelley Schecter, who runs an organization called Educhat and essentially steers the ship of our TNR Program. There is nobody better than Shelley on this.

When my friend and constituent Steven Stein called to tell me that there were three kittens being fed by residents of an apartment building on Sir Walter Scott I met him to investigate. There they were, tucked behind the bushes: two orange ones and one grey and black striped one. Aldo Fernando of our committee had built a small styrofoam house for the cats to sleep in, insulated  with the down jacket of an apartment dweller. Residents there had shared in the responsibility of feeding them and apparently there was a mother cat checking in on them.

My wife and I went back that day with our daughter and out ran the three kittens, which looked no more than three months old. They were a bit skittish, but came right up close to us and gobbled up the tuna we gave them. We brought a cat carrier, hoping to catch and bring them to the local vet. They were too quick. We tried again the next day when it happened to be quite warm.

On the Monday my wife met Shelley at the location. Temperatures had dipped below zero and we were worried. They caught two of the kittens and what we thought was the mom, but one of the orange ones eluded them. Shelley brought those three to the vet. We came back many hours later. The baby was sleeping in the Styrofoam hut, but jumped out when she heard us coming.  You could see her looking around, wanting to know where her two siblings went. Shelley came very close to trapping her in a net, but she was too smart.

I called the vet the next morning. The two kittens were together in one cage, but the mom was not in fact the mom at all. “I think it is the dad actually,” office manager Margaret reported. “This was a boy and we have sterilized him.”

The residents insist how this very cat was caring for the kittens, an uncommon story if he was in fact the dad.

While I was on the phone with the vet, Shelley and my wife were back on Sir Walter Scott. Maureen, the main fairy godmother who has been caring for the cats, called it over for food. Familiar with her voice it came right away. Shelley swooped in from behind and trapped it. The family was to be reunited.

My wife declared that she wants to introduce a new program: TNA –Trap, Neuter and Adopt. We placed this beautiful photo my daughter took of the kittens and many people have stepped forward, wanting to adopt them. 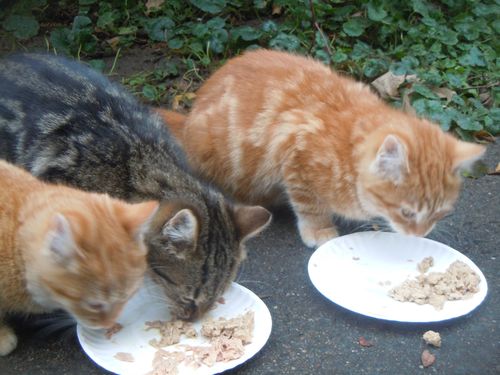 The dad, we are told, is adoptable as well. According to the vet, they need the next week to evaluate and socialize the cats before an exact timeline for adoption can be set.

Here is a funny anecdote. The three kittens were placed in one large cage.  Apparently the bars were not too narrow and they plotted a scheme to escape, squeezing through the slots. They landed in the operating room and ran around wildly in circles before some of the technicians scooped them up and placed them in a more secure cage. I can just imagine the cat talk that went on: “Okay guys, we are together again. At the count of three stretch your body into a piece of paper, jump and let’s go back to our home in the bushes.”

I am convinced these four cats will make wonderful pets. As I have repeated many times, being a cat owner is one of the most wonderful things in the world. I only wish more people knew this. If that were to be the case, a TNA Program could be much more viable.

We will be heading to the vet next week to assist in the socialization. The Côte Saint-Luc Cats Committee is covering the costs of their shots, the sterilization of the dad and the same process for the kittens when they are old enough.  We have prevented the dad from bringing more unwanted babies into the world and we will save the lives of three kittens who would not have e survived the winter.

Sadly there are so many more cases like this. I wish we could intervene in all of them. Email me if you want to get involved: mcohen@cotesaintluc.org.

These three beautiful homeless kittens (approximately three months old) are living outdoors next to an apartment building in Côte Saint-Luc. We need to find people to adopt them as soon as possible. They will not survive the harsh winter. 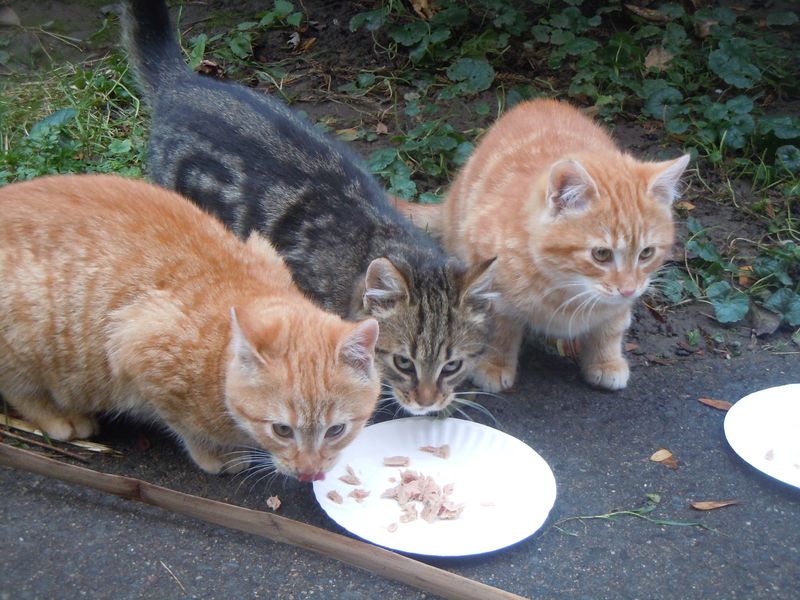 Some of the residents have built a small styrofoam hut and put blankets in there. The cats are being fed. They are absolutely adorable and sociable. Today my family and I went to feed them. They ate right out of our hands.

The Côte Saint-Luc Cat Commitee wishes to trap these cats, bring them to the vet to get sterilized and receive all of the necessary shots.  We cannot really do so unless  we  find homes for them.

Please advise me (mcohen@cotesaintluc.org) if you or someone else will adopt any of them.  I can tell that these cats will make wonderful pets.

And as a cat owner myself, I can attest to what fabulous pets cats can be. 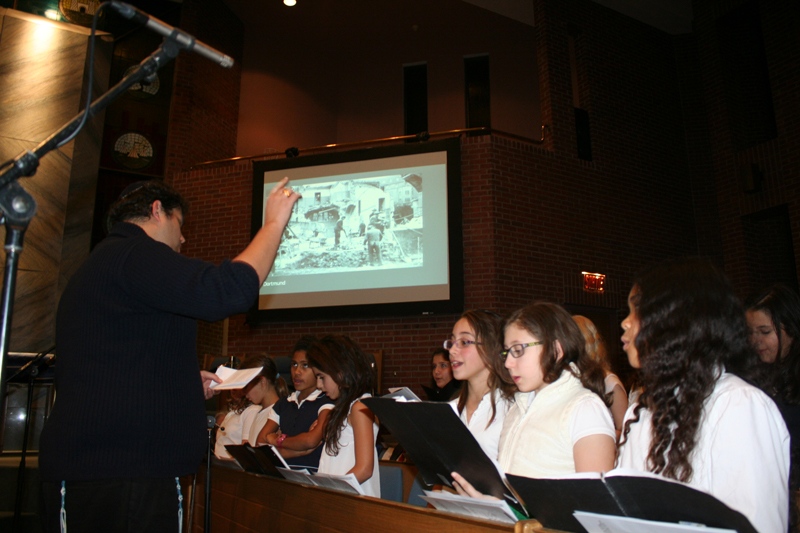 Pictured here is the choir from General Vanier Elementary School from Montreal’s East End where none of the students are Jewish. Their music teacher, Jason Lipstein, is an orthodox Jew who travelled to Israel last summer as part of a Holocaust Education Program at Yad Vashem. Upon his return he pledged to teach his students music of the Holocaust. Their presence at Kristallnacht last week, alongside the Bialik High School Choir, was very well received as was their performance of  the Yiddish folk sing Vie Ahin Zoll Ich Gein (Tell me where I should go?). The program also included remarks from a witness to the Kristallnacht, Isle Matalon, Israel Consul General Joel Lion, Rabbi Reuben Poupko, another short musical program, a memorial prayer and kaddish. Long time Jewish day school teacher  Hanna Eliashiv chaired the evening.

Here is a video about Kristallnacht:

Posted at 12:42 AM in Holocaust Remembrance | Permalink | Comments (0) 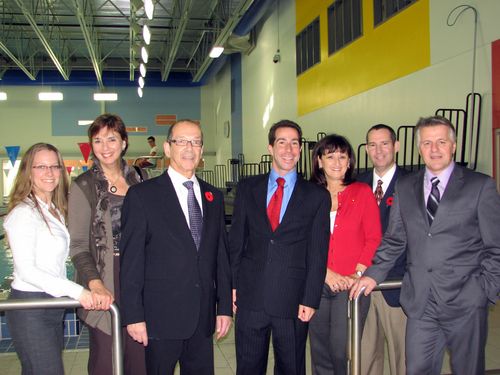 Minister Lessard's department provided one-third of the funding. I was on hand to greet him with Mayor Anthony Housefather, Councillors Dida Berku and Ruth Kovac and D'Arcy McGee MNA Lawrence Bergman, who played an important role in actually securing the funds.

In February of 2010 we held a press conference at City Hall with Minister Lessard on hand to announce our plan for the ACC and the financing from the provincial and federal governments. From the moment we put the shovel in the ground, the ACC was built in an incredible 10 months. We felt it was important for the Minister to see that our dream came to fruition. Mayor Housefather and City Manager Tanya Abramovitch led him on a tour of the two pools, the multi-purpose meeting room and kitchen, the children’s play area, the art  room, the teens lounge, the workout room and the senior’s headquarters where some members were on hand to greet him. He was most impressed. 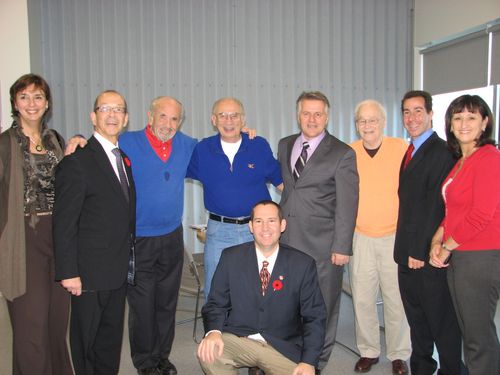 Posted at 12:15 AM in Aquatic and Community Centre | Permalink | Comments (1)