Two Côte Saint-Luc icons passed away in recent days. Morris Krantzberg, 95, was best known as the owner of the Kiddie Kobbler shoe stores, originally on Queen  Mary Road and for  many years at the Cavendish Mall. Manny Gotlieb, a devoted member of the Canadian Legion Brigadier Kisch Branch #97, was also one of the community’s longstanding plumbers. 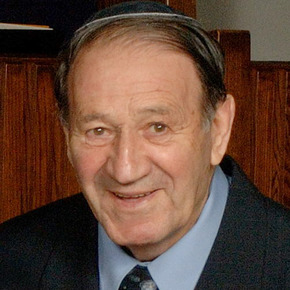 Morris (pictured at the right) will always have a special place in the heart of my family. As my mom and dad reminded me today, they bought the first shoes for myself, my brother and sister at Kiddie Kobbler. I vividly recall the days when I was in my early teens.  At that time my friends and classmates wore Kodiak boots to school. These were, I suppose, the male Uggs of our generation. I would save up money from my Montreal Star paper route and go to Kiddie Kobbler. I recall one time coming up just a few dollars short. Morris took what I had and told me to enjoy them.  He had a gift dealing with children and as a result we all looked forward to shopping there.  Morris was ably assisted by his charming wife Gerry.  I played hockey for many years with their son Leon, today a prominent chartered accountant. Their other son, Eli, is  a gifted musician.

Morris was a proud veteran of the Royal Canadian Air Force. of World War II. Contributions in Morris’s memory may be made to the Montreal Chapter of Dysautonomia (514) 685-0101, or to the Juvenile Diabetes Foundation, (514) 744-5537.

As for Manny, I grew up hearing his name. Whenever we had a plumbing problem, my dad would shout out “call Manny Gotlieb!”  And my parents did so even in recent years, when Manny was retired. He was the kind of guy you call at home in an emergency. He would grab his plunger and race over whenever you needed him. You could not help but like him. He had a wonderful disposition. Manny was very involved with the Beth Zion  Congregation and the Legion. I saw him last at a council meeting. He accompanied his son Bernard, whom we had given recognition for his wonderful volunteer work. My mom saw Manny just a few short weeks ago. He greeted her with a hug and even though he was clearly not well, he wanted to know how she was doing. Contributions in his memory may be made to the Multiple Sclerosis Society of Canada, (514) 849-7591.

Rest in peace Morris and  Manny!

“The choice to make art [in Russia] is not as frivolous as it can be in other countries. It comes with political dangers,” he says. “Obviously they’re doing pioneering work,” he says of Pussy Riot.

Obtaining cash help through this exciting monetary plan will help you get out of your miserable condition within less duration lillian vernon coupons printable 2013 a week possibly even ago, my cousin paul kix from d magazine left to get senior editor of boston magazine.

Hello there! This post could not be written any better! Reading through this post reminds me of my good old room mate! He always kept chatting about this. I will forward this article to him. Pretty sure he will have a good read. Thank you for sharing! nike elite nfl jerseys wholesale

you're truly a just right webmaster. The web site loading speed is amazing. It kind of feels that you are doing any distinctive trick. Moreover, The contents are masterpiece. you've done a excellent activity on this topic!

Usually I do not learn article on blogs, but I would like to say that this write-up very forced me to check out and do it! Your writing taste has been surprised me. Thank you, quite great article.