History was made October 30 at the brand new Aquatic and Community Centre (ACC) as the Côte Saint-Luc Senior Men’s Club became the first organization to hold a formal dinner and dance there. Some 300 people were on hand for a gala evening featuring plenty of delicious hors d’oeuvres (catered by Adam), good music, dancing, speeches from dignitaries and some awards. 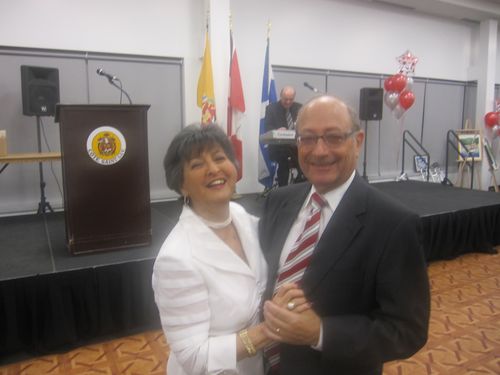 Sidney Margles, the charismatic president of the Men’s Club (pictured here with his wife Merle), and his committee did a wonderful job. What a pleasure it was to drive five minutes from our homes to celebrate in this magnificent facility.  I am sure that we will be very successful in booking all kinds of parties here.

Mayor Anthony Housefather, members of city council and  D’Arcy McGee Liberal MNA Lawrence Bergman were on hand.  Mayor Housefather, just off a plane after vacationing for a week in Brazil, was in splendid form on the microphone. He expressed his delight of holding such an affair at the ACC and once again thanked Mr. Bergman for the key role he played in securing one-third of the financing for us from the Quebec government.  Mr.  Bergman admitted that there was a lot of competition for those funds, but he told members of his cabinet that  Côte Saint-Luc would deliver a first class facility on time and on budget. “And that is what you did!’ he remarked. 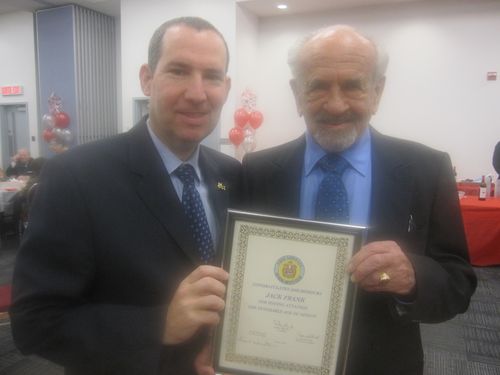 This year’s Man of the Year was Jack Frank (pictured with me at the right), who does such an impressive job editing the Men’s Club Bulletin.  After accepting his plaque, Jack remained at the front of the room as Jacob Posel stepped to the microphone and announced a special tribute. Thirty members of the club are 90 years of age or over.  Each of these men were called up and presented with a plaque as well.  Mr. Frank was among this group.

How I admire these gentleman, who remain in such tip-top condition!

Congratulations to Sid and his team for another classy affair!

Content rights play a major role in this trend. Rights in general are costly, and more so in the US than overseas. My hypothesis is that