A "BeautiFeel" visit to Côte Saint-Luc

Last week my  colleague on Côte Saint-Luc City Council, Dida Berku advised me that her husband Jacob Kincler would be picking up a special friend from Israel at the airport and bringing him over  to City Hall to meet with elected officials. This "friend" was Ami  Bar Nahor, the owner of BeautiFeel Shoes in Israel. 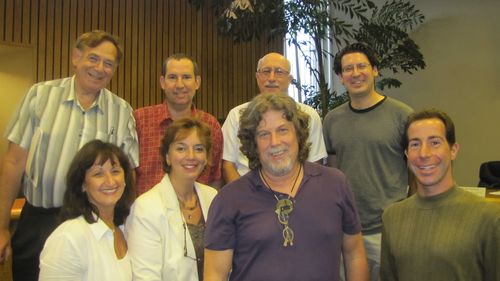 Today,  the BeautiFeel brand enjoys recognition through more than 1,000 high-end stores in  17 countries, including Israel, Canada, the USA, Australia and New Zealand. Bar Nahor was in Montreal  for  three days to meet with his distributors, Irving Brownstein and Sylvain Valois, spend time with  his close friends  Jacob   and Dida   and most importantly visit the shoe store which has given his shoes worldwide attention for all of the wrong reasons. He is pictured above with some members of council and Jacob Kincler.

Last fall Kincler and his wife Berku were on holiday in France when they received an email  from BarNahor inquiring about a campaign back in Montreal to boycott the purchasing of his shoes. Kincler, a native Israeli who actually met Bar Nahor by chance in 2008 while vacationing in  Italy, made some calls and found out that such a campaign had indeed been launched. Boutique Le Marcheur, a shoe store in the heavily French speaking  Mile End District, had become the target of protesters from  a group called PAJU (Palestinian and Jewish Unity) in condemning the fact that it carried  BeautiFeel shoes. Amir Khadir, the rebel anti-Israel Member of the National Assembly for the separatist Québec Solidaire, through oil on the fire by joining in the call for a boycott.  The protesters, carrying placards, began marching in front of the store each Saturday. Yves Archambault,  the owner of the store, refused to back down. Given the fact BeautiFeel  accounted for no more than three percent of his inventory that would  have been the easy approach.

Kincler was incensed. So were other members of the Jewish community, notably activist Sharon Freedman, Suburban Newspaper editor Beryl Wajsman and a list of personalities which grew each week.  Before long there were counter protests, with high ranking elected officials from all  political stripes stepping forward in  support of Archambault. Following many months of this activity and condemnations continuing against the protesters, Khadir finally backed off while PAJU turned its attention across the street to the Naot shoe store, which sells shoes almost exclusively made in Israel.

Bar  Nohar paid a visit to Boutique Le Marcheur last week.  Regrettably, Archambault and his wife were on vacation so their face to face meeting will have to wait for another day. However, as he discussed the boycott campaign with me, Ben Nahor grew angry. “What these people did was completely wrong,” he said. “They took a store hostage for no good reason. There should be a law against such activity. This is not the first Israeli product to be the target of a boycott and it won’t be the last. I have lived in Israel all of my life. I know the kind of tricks these people try to  play. It is disgusting.”

Last week Bar Nahor also walked across the street to Naot to express solidarity with them. While it has not received a lot of publicity, Kincler said that some PAJU protesters continue to march each Saturday in  front of Naot and calling on people to boycott. “We won the round with Le Marcheur and now we have to do the same thing for Naot,” he said. “I think that this  is already happening. They are down to about four or five protesters each Saturday while we have 25. Ami is right. There should be a law on the books that states stores must be allowed to conduct business in peace and harmony.”

Bar Nahor met with Mayor Anthony Housefather and members of council. Driven by the profound conviction that "women deserve shoes that feel as beautiful as they look, for any time of the day, in any season, or for any occasion,”  Bar Nahor established BeautiFeel  in 1989.  He bought a small factory, on the outskirts of Tel Aviv. Accompanied by only five employees  he kicked off the development and production of this innovative idea, giving birth to a whole new concept in the comfort shoe line – "Dressy Comfort Footwear.”

This is one smart guy!

Been there once its really a nice place to be but had some struggle finding motels cause Most of the motels/hotels on St. Jacques cater to "adults" and they are known for their hourly rental policies.

these are really great!

Or uppers big brand decorative metal and covered with the logo pattern, these have been popular in our minds to the regularization and the appearance of flat shoes in this special day, I sincerely wish my mother a happy holiday! Road out your hard ! season is still very powerful, but more bright and gorgeous, the posture of the head start to prompt access to consumers' view of love look of luxury Swiss MBT shoes, but can not be undefeated the preferred models, absorption class eye effect, quite worth the investment.

Woah! I'm really loving the template/theme of this website. It's simple, yet effective. A lot of times it's difficult to get that "perfect balance" between superb usability and visual appeal. I must say you've done a superb job with this. Also, the blog loads very quick for me on Safari. Excellent Blog!

Hi there to every body, it's my first go to see of this webpage; this web site carries awesome and truly fine data designed for visitors.