Almost a year after I held my first public meeting on the subject of the cat overpopulation in our community, I can happily report that progress is being made on the issue.

With the support of the mayor and members of city council I was able to establish the Côte Saint-Luc Cats Committee (CSLCC). Funds were allocated for this purpose in the 2011 budget and we also received a donation from Canadian Pacific Railway. A number of planning meetings were held last fall and winter. Enough people stepped forward to allow us to form a committee. Shelley Schecter, who has been a leader on the island with the Trap, Neuter and Release Program agreed to be our facilitator. She has worked specifically close with Dr. Renee Karp, Ursula O’Rourke and the Côte Saint-Luc Hospital for Animals (Dr. Marlene Kalin) in the trapping aspect of our mandate. This is  vital to controlling the cat population in our community. They wisely started off in the spring focusing on specific colonies where large groups of feral cats can be found. It is essential that we trap as many of these animals as possible, bring them to the vet and have them spayed or neutered. This is no easy task, but our small team has already trapped an impressive number of cats and picked up some kittens as well. 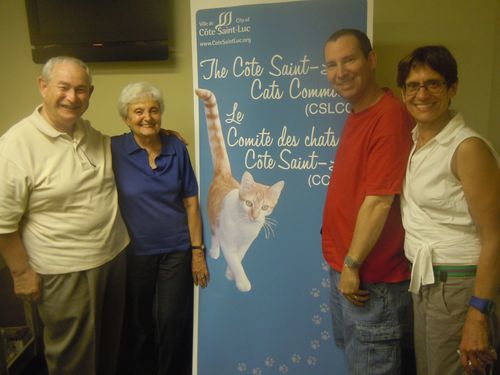 Don and Barbara Adeles (pictured at the left with myself and Shelley Schecter next to our new rollup banner)  are two more key members of the CSLCC. They attended my public meeting last August and made a commitment to help.  They have more than lived up to that pledge. Their garage has been a necessary sanctuary for the cats to stay after they have been treated at the vet and until they are released back into their familiar surroundings.  If we can domesticate a feral cat, we will make every effort to have them adopted. But in most cases this is impossible.

Melanie  Menscik, a familiar face to many who shop at the IGA at the Cavendish Mall and the CSL Shopping Centre, runs our Facebook page (Cote St. Luc Cat Committee –TBR) and now handles our  new cat information  line at 514-485-6800 ext. CATS (2287). Roberta Levine will be assisting her with this task as we are already getting many calls from people interested in serving on the committee or reporting feral cats in their area. Roberta’s daughter Alison has been volunteering as well. Melanie’s mom, quite appropriately named Kitty, has also been involved.

Dr. Ingrid Hings, although a resident of NDG, has been working with us as well, doing a lot of paper work and bringing new ideas to the table. She hopes to form such a committee in her borough. Rachel Alkallay, who resides in Snowdon, is working with us and has some fresh new ideas she plans to share with Alanna Devine at the SPCA. Alanna too has played a critical role in our development.

Our committee met again this week and we all agreed that there is a lot of education still required. Cats are such wonderful animals. There are so many of these precious little things looking for a good home. The CSL Hospital for Animals has four adorable kittens right now. As Roberta noted, “the Trap, Neuter and Release program is also about cleaning up our neighbourhood. So you do not necessarily have to be a cat lover to appreciate that.”

Lydia Ghazal and Tania Alfonsi were first time attendees to our meeting. Both have stepped forward, ready to help with the trapping. Tania even volunteered to foster baby kittens.

Our committee has also received a lot of help from former CSL Mayor Bernard Lang and his wife Miriam.  Bernard attended one of our recent meetings and told us about the colony of cats right next to his home. Our trappers responded and they have successfully trapped and either spayed or neutered more than a dozen felines there. Thanks Mayor Lang!

Now we hope to get out into the community and the schools. We need to educate students and perhaps even encourage them to do some fundraisers so we can increase our activities. We wish to setup information kiosks as well. But mostly we require more volunteers. Whatever one can do, be it trapping, monitoring our phone line, education or working at an information booth, please give us a call.

If there are any cat lovers out there who would like to send us a donation or help setup a fundraiser call our Cats hotline.

See this article, we learned some things.
Thanks for your sharing, and good luck.
By yzi10

Hi, I do think this is an excellent site. I stumbledupon it ;) I'm going to return yet again since I bookmarked it. Money and freedom is the greatest way to change, may you be rich and continue to help others.