An outstanding Canada Day in CSL

Does anyone do Canada Day better than the City of Côte Saint-Luc? As a member of city council and co-chair of this year’s event with Councillor Allan J.  Levine, I am obviously a bit biased. But I believe that this July 1st we really outdid ourselves. By the time the fireworks lit up the sky towards 10 p.m. there were thousands of people crowding Pierre Elliott Trudeau  Park. Allan and I saw  it fitting this year to honour our Canadian troops overseas, particularly in Afghanistan. Thanks to Harold Cammy of our Parks and Recreation Department and Howard Liebman of Mount Royal Liberal MP Irwin Cotler’s office for securing Lt. Col. Pierre Sasseville (with Allan J. Levine and I left) who joined us on stage. His remarks really touched everyone and set the tone for the singing of our national anthem by Alex Cohen and the fireworks.

We opened things up at 1 p.m. by opening the pedal boats and the inflatable and kids zone to the public. One of things I always worry about when we start the process of many, many hours of work in the winter is what the weather will be like on July 1st. It is a real downer when this big day arrives and it rains. Well we fortunately did not have to worry about this for the last two years. Weather conditions could not have been nicer. 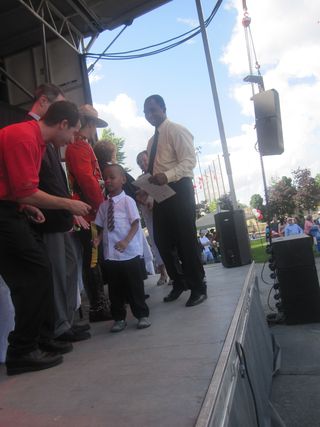 Once again this year we hosted a Canadian citizenship ceremony (right). Retired Judge Barbara Seal presided over the ceremony, chaired by Councillor Mitchell Brownstein, during which 36 new citizens from 20 countries were sworn in. It is such an appropriate way for us to begin this event. As the new citizens arrived, they were serenaded by the musical group Rafi’s Accordion. Côte Saint-Luc resident Rafi Zeira heads this new group, which later set up at the entrance of the park and welcomed people as they walked in.

CJAD Radio’s Dan Laxer (below with his daughter) served as our emcee once again. Dan grew up in CSL, moved to NDG when he got married, but has now returned to our community. 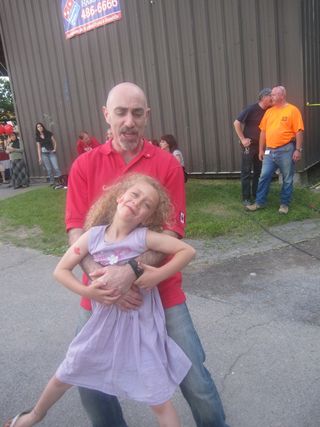 After the citizenship ceremony he invited Mayor Anthony Housefather, Quebec Liberal MNA for D’Arcy McGee Lawrence Bergman, Marc Leiter from the Federal  Mount Royal Liberal Association and Councillors Glenn J. Nashen and Ruth Kovac to the stage for our Human Rights Walkway induction ceremony. This year’s inductee was Aung San Suu Kyi, a Burmese opposition politician and the General Secretary of the National League for Democracy. In the 1990 general election, Aung San Suu Kyi's National League for Democracy party won 59 percent of the national votes and 81 percent of the seats in Parliament. She had, however, already been detained under house arrest before the elections. She remained under house arrest in Burma for almost 15 of the 21 years from 20 July 1989 until her release on November 13, 2010. Canada has made her an honourary citizen. While Kyi was unable to join us, some local members of the Burmese community were. She also recorded a special message for us, which was played over the loud speaker. There was something for everyone at this Canada Day: a model airplane show exhibit put on by the  Model Aeronautics Association of Canada, games for kids, delicious cupcakes sponsored by Scotia Bank  (right) on Westminster Avenue, the presence of the Montreal Police horses, a roaving magician, a children’s train, information kiosk for our CSL Cat  Committee and  Eco Action and some great music.  Michelle Heisler (Dan Laxer’s wife) brought us the wonderful  Magilla singers. The Baratanga Drum Circle were a big  hit.  But then  came the big players: Fresh Entertainment and the Director’s Showband. Wow!

Fresh, the outfit created by Côte Saint-Lucer Mike Goldfarb just a few years ago, added a new dimension to our event. Their deejays and on stage animators got the youngsters in the crowd up to dance in very significant numbers (see below) and spread  the electricity throughout the entire park. 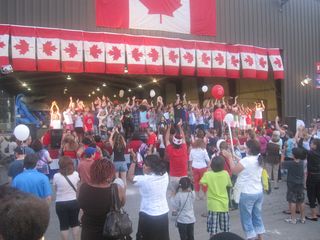 As for the Directors, who were seen in the Golden Globe winning motion picture Barney’s Version (they were the band that played at Barney’s second wedding). I knew they were good, but their three sets really blew everyone away. Lead singers Tony Picciuto and Randi Katz (below) head a group which sizzles on stage. They play such a wide variety of music, from some oldies to the latest hits. The Directors energized our audience and many  in the crowd were begging for their business card to try and hire them for a future occasion. 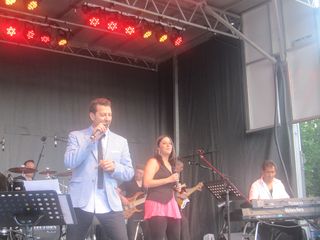 It was an absolutely great night. A special thanks to event coordinator Brad Horner, veteran Parks and Recreation staffer Harold Cammy and the rest of David Taveroff’s wonderful staff. Our Public Security and Volunteer Citizens on Patrol were there all day and kept everything in check. The Public Works Department had all of the right equipment in place.

Indeed, I have never been prouder to be a Canadian and a Côte Saint-Lucer! Now on to some other big events: our Seniors Golf Open July 12 and the ceremonial opening of our new Aquatic and Community Centre. 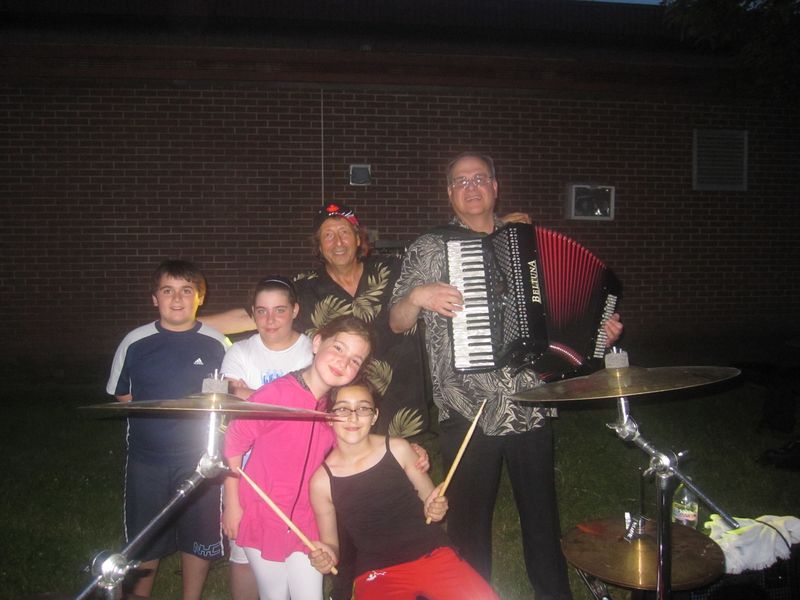 Rafi's Accordion was a hit with youngsters who got a chance to try out their equipment.

Here is a look at the fireworks courtesy of Glenn J. Nashen

Posted at 12:41 AM in Community, Events, Federal Government | Permalink | Comments (3)

I spent all night at the face painting and Canadian Leaf tattoo station with some of our day camp volunteers. The kids were so happy to have their faces painted as butterflies, Batman, Spiderman or princesses. Kids, teens and adults loved receiving multiple Canadian Leaf tattoos on their cheeks, arms and legs. I was greated by so many smiling faces, it really was a great night.

While the violet silk show more noble and elegant.

Hello joyqgazue, inside a couple about zynga poker chips with just about every day other equally with your subject substance content, I guess i am not even attempt to the exclusively 1! website content to share, the night-life of potential. -Boutique Nike Paris Thank you accordingly a positively lot on discussing this reasonable idea Boutique Nike Paris.
Good agkgquyl!!