Côte Saint-Luc City Hall was the site of  a CD launch on June 6, prior to my District 2 Information meeting. Rafi Zeira, his wife Fay and two  friends – Michel Tordjman and Larry Hughes -were on hand to present their catchy CD as quiet background music as people entered the room to talk about matters such as traffic, new construction, parks and keeping the streets clean. 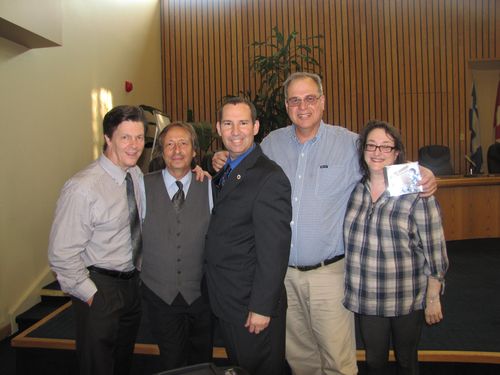 The CD is called Raffi’s Accordion. It is a medley of Jewish songs of six tracks and 38 minutes long.

“My parents sent me to study acordion at the age of nine,” says Zeira, a native of Israel. “I played on and off through the years, but only in family gatherings. When I met Michel, we played together for charity in and around the Jewish community. I decided to make a CD so that future generations will remember me and the songs. We worked for about a year and a half on it.”

Fay has worked in photography and design as a hobby and designed the CD cover. Tordjman  has been playing drums for 40 years.  “I play many different styles of music and have recorded a few CDs,” he says. “One of my dreams was always to produce an artist. I also enjoy working on music and theory. Rafi being such a great musician and friend of mine, was someone I wanted to produce. What made it exciting for me is that this would be his first CD.  He trusted me and gave me all the freedom I needed to be myself. I am looking forward to producing his second CD.”

As for Hughes, he  has been a musician in Montreal for the past 41 years. “I played with some of Montreal's and Canada's top acts,” he says. “ I currently own and run a recording studio on the West Island. I am very impressed with Rafi’s expertise on the accordion and I enjoyed engineering his first CD.”
To get your copy email rafisaccordion@gmail.com. Here is an interview with the team: