In his 35 years as a music teacher and choir director at Montreal Jewish day schools, Vilna-born David Botwinik taught more than 30,000 students. He has also written scores of Yiddish songs, which have been circulated around the world. 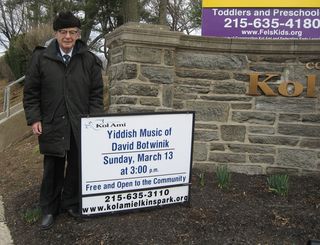 Now 90 years of age, the longtime Côte Saint-Luc resident (right) was honoured on, June 17  at the second annual International Yiddish Theatre Festival at the Segal Centre of the Performing Arts.   For the first time  he actually witnessed a concert featuring his very own music performed by internationally acclaimed soprano Lisa Willson, pianist Elena Berman and special guest Philip Goldig.

This concert was in celebration of Botwinik’s new book, From Holocaust to Life (Fun khurbn tsum lebn), now in its second printing. The book, which was available for purchase, contains a collection of 56 original musical compositions. These are new Yiddish songs and solo and choral works, with lyrics by various Yiddish poets, complete with English translations, piano accompaniments, and chords

Lou Burko, the retired music director at Shaare Zion Congregation in Montreal, calls Botwinik’s book a “formidable opus " and “a musical biography of David Botwinik's life,”
Botwinik retired in 1991 after a career at the Jewish  People’s and Peretz Schools  (JPPS) and United Talmud Torahs. But working closely with one of his three sons Alexander, now a Yiddish teacher  at the University of Pennsylvania in  Philadelphia, he has kept busy writing music and of course his book. He does not use a computer, so he writes everything by hand and sends it by mail to Alexander.

“I transcribed his handwritten scores onto the computer using music engraving software and painstakingly added the lyrics under the notes in both Yiddish and transliteration,” Alexander explains. “I also did the book design and layout and worked on translating the song lyrics together with my wife, Naomi Cohen and my brother Leybl. Since the book came out last summer, I have continued to be involved with publicity, arranging quite a few interviews and concerts devoted to my father's music.”

David Botwinik came to Canada in 1956  with his wife Silvana, who had been hidden in a church with other Italian Jews during the German occupation of Italy. The couple still live in the same  Côte Saint-Luc home where they raised their family.

Botwinik says he is not finished yet. He plans to start working on a book about the Holocaust, including stories his own family may have not yet heard before.

I was pleased to be at the event and asked to say a few words about David Botwinik, whom I have known since childhood. My friends and I used to play street hockey right in front of his house.  Mr. Botwinik has been known to attend some Côte Saint-Luc city council meetings.  Last week I met him at the grocery store. He was purchasing a loto ticket.

Mazel tov to you David!

As she filled a national social, sensitive antennae of the most important social status, to reach out and touch the compassion of strangers.

When I walked home that night, I warm my soul ofsatisfaction curiosity and a lot of strange things I found amazing that the earth magic thatare. I think if I wrote a story, I should stop at this point, but in the shadow of life.

To read a book well, one should read it as if one were writing it

Hey there, You've done an excellent job. I'll definitely digg it and personally recommend to my friends. I'm sure they will be benefited from this web site.

Hi there, every time i used to check webpage posts here in the early hours in the dawn, as i like to gain knowledge of more and more.

Hi would you mind letting me know which hosting company you're using? I've loaded your blog in 3 completely different internet browsers and I must say this blog loads a lot faster then most. Can you suggest a good hosting provider at a reasonable price? Many thanks, I appreciate it!

Wow, awesome weblog structure! How lengthy have you ever been blogging for? you make blogging look easy. The overall glance of your site is great, as neatly as the content material!

I was recommended this website by my cousin. I'm no longer sure whether or not this post is written by way of him as nobody else recognize such unique about my problem. You're incredible! Thanks!

Wow! After all I got a webpage from where I be able to genuinely take valuable information concerning my study and knowledge.