“In order to live in the hope of peace we must honour the victims of this horrifying period,” Charest told the gathering of more than 1,000 people. “Overall we must prevent such horror from ever happening again.” 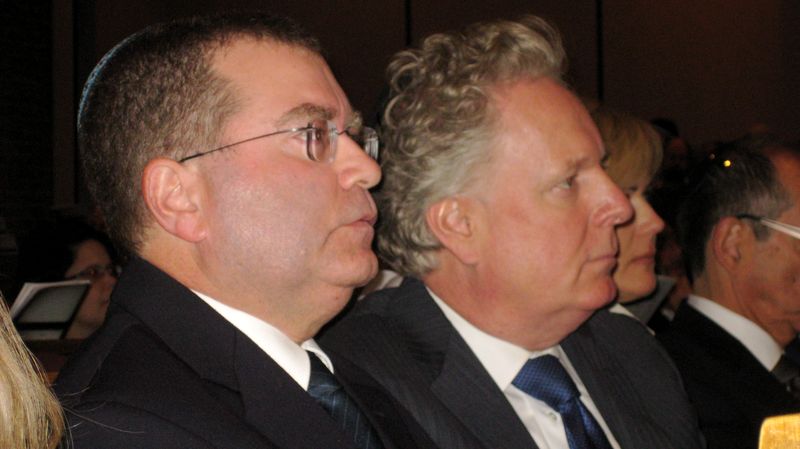 Charest alluded to D’Arcy McGee MNA Lawrence Bergman, chairman of the government caucus, who in 1999 sponsored a bill in the Quebec National Assembly which officially proclaimed a Yom Hashoah Day in Quebec City. It was approved by members of all parties. “Quebec’s representatives from all parties made this gesture so that the death of six million innocent men, women and children would never be forgotten. Montreal and Quebec would not be the society it is today without its Jewish community. I want to remind all Quebecers about our duty to remember.”

This year’s theme, The life that was, sought to portray all that was destroyed through Nazism and to highlight the consequences of discriminatory and racist policies which still today, can lead to genocide.  Organizers wanted the elements of the program to help the public understand life in Jewish communities before and during the Holocaust.

Six Holocaust survivors, symbolizing the six million victims of the Jewish genocide during World War II, lit memorial candles with second and third generation members of their families.  They  spoke through short video-clips: Ben Bicher talked about Jewish life in Belgium; Henry Gitelman  evoked images of Sabbath with his grandparents in Poland; Susan Arato, who attended a crafts school to become a stylist, told  about her family life; Charlotte Szyf  shared her memories of summers at the seashore in Poland; Dr. Emil Svarc, a young child when Yugoslavia (Croatia today) was occupied,  remembered how he enjoyed playing in the park with other children and Sarah Engelhard  shared her aunt’s advice.

The Bialik High School  Choir, conducted by Lorna Smith,  were  excellent as they sang a number of songs in Yiddish.  Marcel Tenenbaum and Jack Dym co-chaired the event. Israeli Consul General Yoram Elron, who only six weeks ago lost his eldest son to cancer, thanked the premier for attending and spoke about the importance of a Jewish State – something that did not exist during the Holocaust.

Yom Hashoah was organized  by the Montreal Holocaust Memorial Centre.

On May 3,  B'nai Brith Canada-Quebec will mark Yom Hashoah  with a memorial ceremony on the steps of Montreal City Hall.

“We believe that each individual victim of the Holocaust deserves to be honoured and remembered as each one of them was someone's mother, father, grandmother, grandfather, daughter or son,” says Heidi Open, director of the B’nai Brith Quebec Region office. “ It is those individuals who we hope to bring back to life for a moment in time as we read their names during the Yom Hashoah memorial ceremony and to ensure that the lessons and memory of the Holocaust are not forgotten.