Côte Saint-Luc is fortunate to have a very active group of war veterans. The Brigadier Frederick Kisch Branch #97 has indeed lost many members over the last few years. I can think of a few of my own constituents like Kek Rosenblatt and Joe Blumer.  I remembered these gentleman today, not to mention their longtime leader Robert Feldstein, as we gathered at Veteran’s Park to commemorate VE Day. 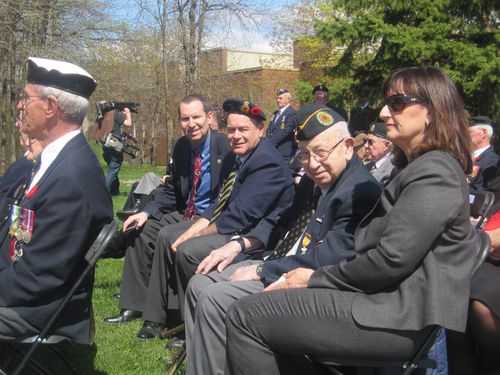 Victory in Europe was celebrated across North America on   May 8,  1945 after Germany's unconditional surrender. In cities and towns across Canada, thousands of people turned out to express their joy and relief at the news. Religious services of thanksgiving were held and people celebrated with cheers and tickertape. Two earlier reports that the Germans had surrendered primed the populace for celebration. The first, on  April 28, was erroneous; the second, on the morning of  May 8, was merely premature.

The military surrender agreement for the German forces was signed in Rheims, France, at 2:41 Cam local time on  May 7, 1945 by Colonel General Gustav Jodl, the German army's chief of staff; Lt-Gen Walter Bedell Smith, chief of staff for the Supreme Allied Commander General Dwight D. Eisenhower; General Ivan Susloparov for the Soviet Union; and General François Sevez for France. Allied headquarters ordered the news to be withheld for 24 hours, although Germany announced the surrender.

The celebrating started across North America on  May 7, but subsided when people learned it had not been confirmed. When confirmation did come at 9 am EDT on   May  8, celebrations resumed, in many places even more fervently than the day before. Many cities had prepared for the announcement by ordering that liquor stores and drinking establishments be closed when the announcement came, but in Halifax and Dartmouth the celebrating got out of hand, resulting in the VE-Day Riots. Canada's third war in less than half a century was nearing its end. The atomic bomb and victory in the Pacific were only four months away.

In Côte Saint-Luc the weather could not have been nicer for our 2011 ceremony.  A nice crowd was on hand at Veteran’s Park, right next to City Hall. Mayor Anthony Housefather made a speech praising our veterans. Dignitaries representing different countries, associations, municipalities and even local police commander Sylvain Bissonnette laid wreaths.

We are so fortunate to have these war veterans still in our midst. Sadly, as the neverending war in Afghanistan shows us, this country will have war veterans for many, many years to come.