The Freeway is about to run down Forte Street in downtown Montreal. On Monday morning, the new Freeway and Lisa in The Morning Show debuts on Virgin Radio. Freeway Frank Depalo, born and raised in Montreal North and Rosemount, was repatriated by station brand/program director Mark  Bergman quite soon after Cat Spencer’s surprise announcement that he was leaving to take over mornings on The Q 92.5 FM. Cat will succeed Aaron Rand, whom we are told will do his final show towards the end of April. But here is the rub: Cat’s contract with Astral Radio does not conclude until August 31 and from everything we have heard  there is no desire to spring him loose from that agreement prematurely so he can chalk up strong ratings for the competition. It is smart strategy. Put him on the sidelines and move the new guy in as soon as possible in order for him to develop a following.

I have a feeling that Freeway will become an instant favorite here. He has a vast amount of radio experience  and 18 years after leaving his native land to pursue a career in radio elsewhere he is back home. “I always told my late father that my dream one day was to come back to Montreal as either a program director or morning show host,” Freeway told me in an interview at the station. “Well Mark is doing a great job as program director and I certainly did not expect Cat to leave. So, when I got the call and the offer I was pleasantly surprised. My mom is so excited she wants to invite Cat for dinner. I think that will happen. I will reach out. We have never met in person, but I think that will happen. He may now be my competitor, but I consider it a friendly competition.”

Freeway was working at Energy 101.5 FM in Calgary when he got the call from Bergman. He and his girlfriend owned a home there and the basement walls had Montreal Canadiens logos painted on it. “I was lucky to rent the house to some friends and they got rid of the Habs stuff,” he laughed. “I have always remained a huge Habs fan. It is so exciting to be back and able to follow them every day and even talk about them on air.” 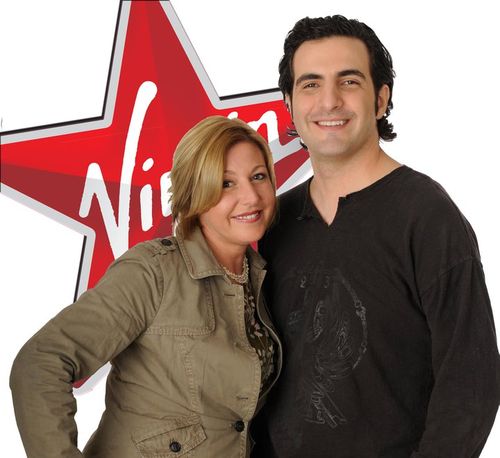 When I reached Player (at the left with Freeway), who has been a morning show staple here for seven years, she was busy walking her dog Roo. She was excited about beginning this new partnership and is confident it will work. “I felt good about Frank the first time we met,” she said. “We will just build from there. This is just like a new couple getting together and you know sparks will fly.”

Frank is eager to introduce his seven month old dog Enzo to Roo, who is 11 and a half.  Let’s watch if this bit makes it on air.

Frank took English Literature and History at Concordia University while serving as program director f or campus station  CIRL. Upon graduation he got work at the old 990 HITS, a previous incarnation of CKGM. He was known then as Frank Kelly. He spent three years there and moved on to Vancouver (Z 95.3 and LG 73), Toronto (Mix 99.9) and of course Calgary. For four years he also hosted the Canadian Top 20 Countdown, which is carried on Virgin Radio on Sundays.

Oh yes, and how did he get the nickname “Freeway?” While working in Vancouver in 1995, the motion picture Free Willy came out. “The station wanted me to go by the name “Free Willy” Frank,” he explains. “I opted  for Freeway.”

I asked Bergman, who grew up in Côte Saint-Luc, how he snagged a star like Frank so quickly. “We have a big network of hosts that we have on our wait list,” he said. “Frank was number one on that list.”

Also joining Virgin to take over from Heather B in the early afternoon is spunky Nikki Balch  from 1 p.m. to 4 p.m. Bergman feels she will bring new energy and flare to Virgin, noting that she possesses an incredible love of hit music, pop-culture, and social media.  Nikki comes from out East, where for the last five years, she was the morning co-host at Z103.5. In 2008, she was the recipient of the Coast Award for “Best Radio Personality.”

Quality articles is the important to be a focus for the people to pay a visit the web site, that's what this web page is providing.

I know this if off topic but I'm looking into starting my own weblog and was curious what all is needed to get setup? I'm assuming having a blog like yours would cost a pretty penny? I'm not very web savvy so I'm not 100% certain. Any tips or advice would be greatly appreciated. Many thanks