The old Eaton is finally gone from the Mall

It has been many years of course since the Eaton's store (or Eaton as our friends from the language police called it) closed its doors across Canada and at the Cavendish Mall.    Because it occupied such huge space, the Mall had a devil of a time finding a tenant willing to take the two and a half floors. So, it was divided up piece-meal.  Federation CJA used it for a year while its building on Cote St. Catherine was being renovated. There were a couple of video stores near  the end closest to Kildare Road and the Pneus Expert automobile repair shop developed a loyal clientele.  More recently, it was Beth Chabad which held  court there as their new project at the corner of Kildare and Marc Chagall was under construction (that is a story for another day, but it has been "under construction" for years and the congregants now convene in rented trailers and at Bialik High School. 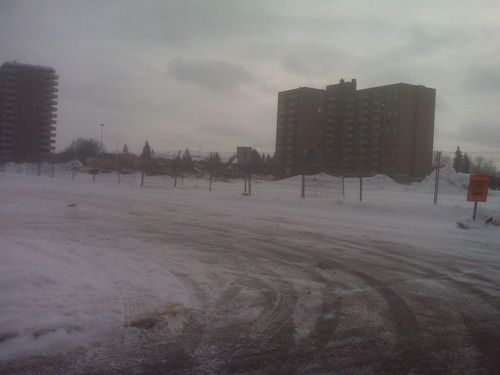 Even though Eaton was gone, everyone I knew still considered that  old spot its home - util last week. For the past two months wrecking ball crews have been smashing down 40 percent of the Mall to make way for a new housing  development. A few days ago the work was complete and  the final piece  of the old Eaton facade was  smashed into pieces. See above. That is where Eaton once stood.

What you now see at the Mall is a whole lot  of rubble on the ground. Crews will now get cracking at clearing the area.  The developer hopes to break ground by March.

The Jewish community of CSL is slowly dying out. Another decade or so and it will become indistinguishable from NDG...