A "small world" story: The Zygielbaum connection from California

Stanley Diamond, the charismatic founder of the Jewish Genealogical Society of Montreal, contacted me with this very interesting story. I will share with you what he wrote.

My daughter Jessika Diamond is moving from Alameda, California to Toronto next week.

After 12 years in the Bay Area, Jessika is divesting of anything she does not want to ship, store, mail or bring in her car (she is driving cross-country in January).  Her goal is to throw nothing out – everything is going to charity, recycling, to friends, or out on Freecycle, a mailing list where people post what they are giving away, or what they need.

This week, she posted an offer of dozens of file & hanging folders.

A number of people expressed interest, including a young woman at a nearby non-profit.  Since Jessika is partial to non-profit groups (as an event manager, her specialty is large-scale galas & fundraising events for charities), she chose this young lady to receive them.

As she was replying, Jessika noticed the young woman's name is Zygielbaum, the same name on the sign in the park across the street from our house on Edgemore (Arthur Zygielbaum)  in Cote Saint-Luc where she grew up.  Her comment to Beth Zygielbaum was “and for a random moment… you have the same last name as the WWII resistance fighter for whom the park across the street from my parents’ place in Montreal is named!” 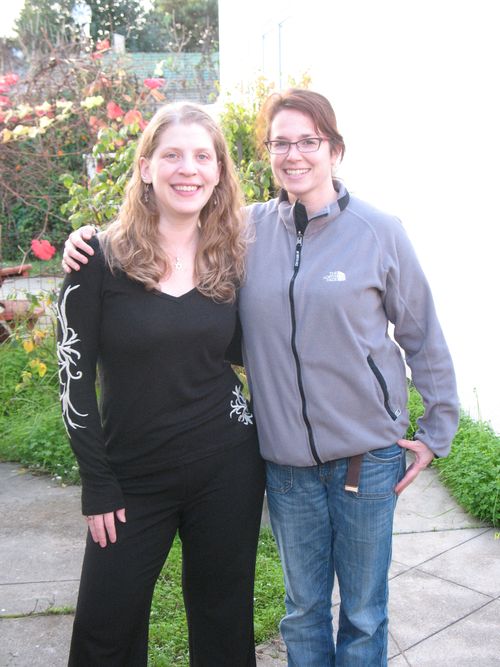 Beth’s reply was “not random at all to me, he was my great grandfather!! His son, my grandpa was also heavily involved in the resistance in Poland as a leader of a militia living in the forest near Warsaw.  I visited the park with my family as a small child but haven’t been back since then.”

When her family – including the next generation, the 15-month-old great, great-grandson - came to pick up the folders, Jessika took a picture with them.

Go figure, Jessika, daughter of a Dutch Holocaust survivor, growing up spitting distance from this park named for Zygielbaum, meeting the great-granddaughter of that man, in a small city in California, where they both reside.

I love that we can sit in the silence together and know that silence is ok!

My Grandmother is over eighty and still doesn't need glasses. Drinks right out of the bottle. Do you agree?

Everyone loves it whenever people come together and share ideas. Great site, continue the good work!

What's up, just wanted to mention, I enjoyed this article. It was practical. Keep on posting!