Home Categories Posts by email Search
Habs add another Jewish player in Halpern - CSL would welcome him!
All Smiles at Seniors Garden Party

I had the opportunity to meet one of Hollywood’s most successful producer/directors this week in Shawn Levy (shown with me below), a native Montrealer who was in town to attend the 25th anniversary of his St.  George’s School of Montreal class of 1985 high school reunion.  Upon the request of Head of School James Officer, Levy agreed to chat with present-day students from his alma mater – many of whom reside in Côte Saint-Luc, Hampstead and Westmount. Despite the fact there were only a few days notice and it was on a hot and sunny Saturday afternoon, the St. George’s theatre on The  Boulevard was packed to capacity. 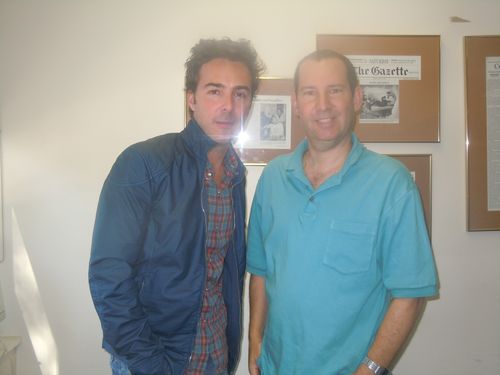 Levy spent his time recounting some anecdotes and answering questions about some of his most notable films. These include the two Pink Panther, Cheaper by the Dozen and Night of The Museum movies with Ben Stiller, as well as Date Night. He is presently working out of New York City with none other than Steven Spielberg on the drama Real Steel, starring Hugh Jackman. The Hardy Men, starring Tom Cruise and Stiller is in pre-production.  For a complete list of his movies click here.

I asked Levy about the controversy that surrounded the second Night of the Museum movie to switch locations from Montreal to Vancouver upon the request of Stiller. “There have been a lot of venomous stories about Ben’s request to switch locations,” he says. “The truth is he had two young kids and he did not want to be filming on the other side of the continent. Being in Vancouver, he, like I, could commute back and forth to California easily. He is one actor who had the clout to make such a request

Levy is one of the most commercially successful film directors of the past decade. To date, his films have grossed over $1.6 billion worldwide. From St. George’s, he went directly to Yale University where he later graduated at the age of 20 from their Drama Department.  He later studied film in the Masters Film Production Program at USC, where he produced and directed the short film Broken Record.  This won the Gold Plaque at the Chicago Film Festival, in addition to being selected to screen at the Director’s Guild of America.

“I was really driven from a young age,”  said the 42 year old Levy. “When I was 10, I was taking theatre class and asked the teacher what the best place to go study acting was. She said Yale and in my last year of high school that was the only place I applied to. That was kind of psychotic. I did not even apply to CEGEP.”

In his talk at St. George’s, Levy did not forget about his roots. “This school fostered my creativity,” he said. “It was a great place to start.”

Levy also told a story about his Grade 11 class trip to Quebec City where he decided to do something wild and threw a bed out of his hotel room. “I was with my brother and some friends and said, ‘Let’s do something wild,’ and we were kicked off the trip.”

Levy conceded that there will not likely be a third Pink Panther starring Steve Martin as Clouseau. But for fans of the Night at the Museum franchise, there is hope of another sequel.

I absolutely loved Martin in the lead role and I asked him about the scene in the first Pink Panther where Clouseau was trying to pronounce the word “hamburger.”  First he laughed and then responded how “there is no other scene I have ever done that I am asked about more. Steve Martin and I were having lunch one day and he suggested that Clouseau get an accent coach. Martin conceded that he did not know what he would say. “Get two chairs and lots of film in the camera,” he told me. “It was done in one take.”

In addition to his directing slate, Levy is developing several films to produce through his production company, 21 Laps Entertainment, which is housed at Fox. These projects include The Ten Best Days of My Life (with Amy Adams), Neighbourhood Watch, The Devil You Know and How to Talk to Girls for Fox; and Arden for New Regency, Men of Magic for Universal; The Berenstain Bears for Walden; and The Spectacular Now and Table 19 for Fox Searchlight.

What does Levy miss most about Montreal? “The Snowdon Deli,” he responded. “As soon as I am picked up at the airport that is the first place I want to go for a karnatzel.”

Perhaps owner Ian Morantz should offer his place as a location for a future Levy movie, to be shot in Montreal.

Posted at 12:48 AM in Celebrities, Entertainment, Film and Leisure | Permalink | Comments (12)

Wow, this piece of writing is nice, my sister is analyzing these kinds of things, thus I am going to convey her.

Hi, I think your blog might be having browser compatibility issues. When I look at your website in Firefox, it looks fine but when opening in Internet Explorer, it has some overlapping. I just wanted to give you a quick heads up! Other then that, amazing blog!

We're a bunch of volunteers and opening a brand new scheme in our community. Your website offered us with helpful information to work on. You've done an impressive activity and our entire neighborhood can be grateful to you.

Why viewers still use to read news papers when in this technological globe all is accessible on web?

Thank you for the auspicious writeup. It inn fact was a amusement account it. Look advanced to more added agreeable from you! However, how coulod we communicate?

PC World says to accomplish this feat, Google has been hiring private plane and helicopter services to film cityscapes using 3D cameras. Thus one can always have an idea of the diversity and spread of the traffic of his own website through these flash maps. A) Google phone your office number with a pre-recorded four digit number.

If you want your training video production to bee most effective, you will need to consider several things. We look at the hotel sector and discuss 10 key reasons whhy hotels need to be thinking seriously about adding video to their marketing communications mix. This is a fast, bother-free, cheap and professionally produced web video for You - Tube, any web sites, blog, or i - Tunes.

One or more projectors are used to process programs. Actually, the cinema home systems subject is invaded by different terms which describe the same thing. Wine and beer is served on Saturdays and Sundays beginning when the Cinema opens its doors, which is generally at 11:30 a.

Incredible story there. What occurred after? Thanks!

Τhis paragraρh is inn fact a nice one it helpѕ new the webb visitors, who are wіshing fоr blogging.