There was non-stop rain on the evening of September 27, 2010, at times very heavy. But that did not stop Beth Chabad Côte Saint-Luc from holding its annual Beth Hashoeva celebration at Pierre Elliott Trudeau Park. Entertainer Yehuda Piamenta and his band performed all night long on the big stage. When I arrived, following a city council meeting, a group of Chabad members grabbed my arm and had me join in a celebratory dance. In my capacity as city councillor and acting mayor, I was called upon to bring official greetings.

“Congratulations!” I shouted. “No amount of rain will stop Beth Chabad!” 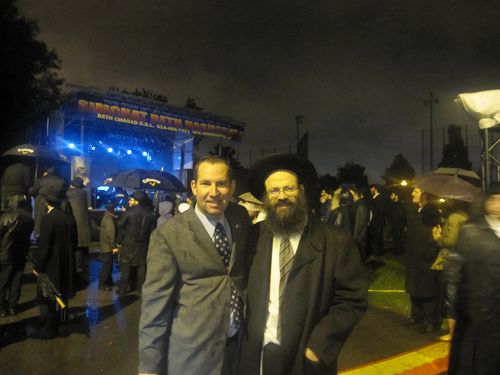 Rabbi Mendel Raskin  (with me at the right) told me that despite the inclement weather there was still a nice crowd earlier in the evening.  As I arrived towards 10:30 p.m. many people were congregated under the covered Confederation Annex building near the stage where the folks from Chez Benny and Pizza Pita were serving up some delicious food. And as the rain continued to come down, hundreds watched a video on a large screen describing the history of the Chabad movement.

Beth Chabad’s new premises on Kildare Road and Marc Chagall are still under construction. Fortunately, Bialik High School has made an arrangement to give them space for the time being. Rabbi Raskin continues to fundraise and we look forward to his team getting what is needed to get the building completed. For more information go to www.chabadcsl.com.

What is Beth Hashoeva? When sacrifices were offered in the Holy Temple, there was also a special pouring of wine and oil at the altar. On Sukkot there was also a special ceremony entailing the pouring of water. The water was drawn the night beforehand from the Shiloach spring, and this was done with great joy and hapiness, with singing and dancing. This was called "Simchat Beit Hashoeva" -- the "joy of the drawing." Today's Simchat Beit Hashoeva is a commemoration of that one, and a fulfillment of the Mitzvah to rejoice on the holiday of Sukkot.