CJAD 800  announced today  the signing of free agent Montreal-native Sergio Momesso to join the  Broadcast Team for Montreal Canadiens hockey in the 2010-2011 season. I  had predicted his candidacy a few weeks ago on Twitter and in my Suburban Newspaper column. 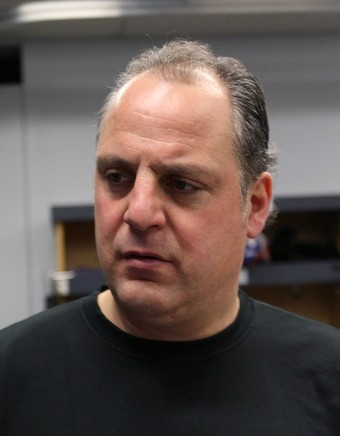 I have known Sergio since he was a teenager starring for Shawinigan in the Quebec Major Junior Hockey League. As an NDG native, he was indeed a local boy makes good story when he was drafted by the Habs and stuck with them. His family still owns Momesso's Restaurant on Upper Lachine  Road (amazing subs) while Sergio got into the restaurant business on the West Island.

Momesso spent 13-years  in the NHL. He will now be heard on every Canadiens' pre-season, regular season and playoff game.   He will also contribute daily to the Andrew Carter Morning Show (Weekdays 5:30-9:00AM) at 8:25AM and weekday afternoons on the Ric Peterson Show (Weekdays 4-7PM) at 6:25PM.

“I’m looking forward to sharing my experiences on the ice, and in the dressing room, with Habs fans everywhere”, said Momesso. “It’s really exciting to be part of such a legendary franchise and radio station."

"Momesso had a great following as a player and I'm sure he'll quickly build one as a broadcaster...he'll proudly take the torch from a true champion Murray Wilson," says CJAD 800 Sports Director Rick Moffat.

I know Rick speaks highly of Murray, but I sure won't miss his boring contribution to the broadcasts.

Momesso made his NHL debut with the Habs at the age of 18.   He wore  number 36 and scored 29 of his 152 career regular season goals in "bleu, blanc, rouge" while racking up more than 1,500 penalty minutes.  Momesso earned his Stanley Cup ring as a member of the Canadiens in 1986, and went to the Stanley Cup Final as assistant-captain with the '94 Canucks.

*People enjoy the characters are not happy.

No one can degrade us except ourselves; that if we are worthy, no influence can defeat us.

I am amazed how a people can continuely permit a corrupted government screw them over, and do nothing about it, but if a hockey player get's hurt, they react as if it's the end of the world. It's time that the Quecois get their priorities straight; hockey is just a game!! This government of ours is reality!!!! WAKE UP QUEBEC!!!!!!!!!!!!!!!!!

Good stuff as per usual, thanks. I do hope this kind of thing gets more exposure.

Wonderful goods from you, man. I've understand your stuff previous to and you're just too great. I actually like what you have acquired here, really like what you're saying and the way in which you say it. You make it enjoyable and you still care for to keep it smart. I can not wait to read much more from you. This is actually a great web site.