I hosted an unprecedented public information meeting on August 18 at City Hall about what residents can do to help control our cat population. It exceeded my expectations in terms of interest. A standing room only crowd of more than 100 people stretched into the hallway. Media coverage in advance of the meeting and on this night was exceptional. Alanna Devine, the director of animal welfare at the CSPCA, and Dr. Marlene Kalin, the director of the Côte Saint-Luc Animal Hospita,l were special guest speakers. 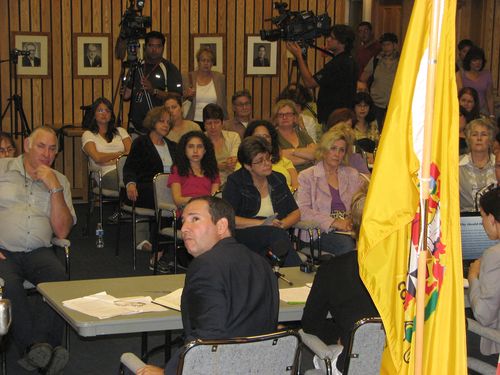 Focus was placed on the Trap, Neuter, and Release (TNR) program, cat overpopulation, and responsible pet ownership. The TNR program humanely traps, sterilizes, then releases feral cats back into their original territory. Experts say that removing feral cats doesn't work because new cats simply move into the area. If the cat is adoptable, efforts are made to place it with a family. A cat can reproduce four times a year, beginning from six months old, and can give birth to from one to eight kittens each time. Two unaltered cats can, over a period of seven years, create more than 400,000 kittens. By sterilizing the cats, their numbers are brought down through attrition.

While the majority of the people in the room were from Côte Saint-Luc, we had some people from the Hochelaga-Maisonneuve district of Montreal, Outremont, N.D.G., St. Laurent  and even Pierrefonds Borough Councillor Catherine Talbot. She is a member of Montreal Mayor Gérald Tremblay's party and agreed to share all of what she heard at our meeting with the mayor himself. That is certainly positive. The boroughs of St. Laurent and Verdun have TNR programs, but leadership on the part of Mayor Tremblay could be a real positive development.

Patricia Tulasne, from Hochelaga-Maisonneuve, told us that in her district stray cats are rounded up an euthanized. She wants the city of Montreal to make spaying and neutering mandatory.

There were many excellent suggestions at the meeting and willingness on behalf of a lot of people to sit on an actual committee. Should specific bylaws be introduced to make spaying or neutering a cat mandatory? Can the city help fund a TNR program? Can we require a license for outdoor cats? Can an education program in the schools be launched? What is the Quebec government's position on this? Can municipalities form a partnership on this issue? Are there fundraising opportunities for a TNR? 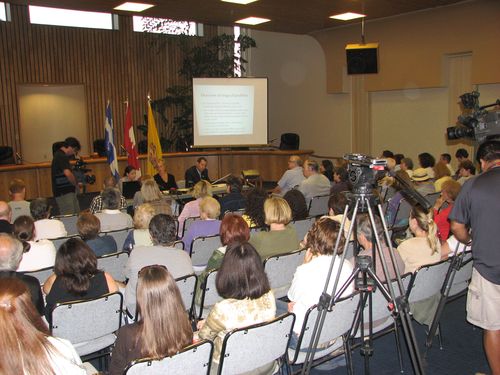 Alanna Devine told us about a gentleman by the name of Bill Bruce, the city of Calgary's top Animal & Bylaw Services officer, The Animal and Bylaw Services department actually makes money, unlike the majority of animal-control facilities in the United States. Licensing fees — not tax dollars — fund the department’s volunteer, public education and animal adoption programs, as well as the operation of its animal shelter and its new low-cost spay/neuter clinic, where low-income pet owners can get their animals sterilized for free.

Dr. Kalin's clinic has spayed or neutered more than 300 ferel and abandoned cats over the past six years. She keeps them in an isolation room. They are humanely trapped in a cage, sedated, dewormed and vaccinated for upper respiratory disease, put back in their cage and ultimately brought back to where they were picked up. Most of these cats, especially the older ones, are too wild for someone to adopt.

The TNR program costs about $80 per cat. Dr. Kalin has done most of these procedures for free. But if a fund existed, more people would bring such cats in. She claims there are around 10,000 ferel and abandoned cats in CSL alone and similar numbers in other municipalities our size.

Shelley Schecter, who has volunteerd for years to do a TNR program in  Côte Saint-Luc, was on hand and got a well deserved cheer for the incredible work she does. There were many others in the room who do amazing things for cats. One lady who has lived in CSL for 45 years spoke about a neighbour who refused to get her female cat spayed. The cat kept reproducing and despite her pleas, the owner would not do anything. When the cat gave birth to one of her litters, this woman took her in and eventually got her spayed on her own. It is irresponsible for a cat owner not to have their cat spayed or neutered!

I will now report to the mayor and members of council on the results of this first meeting before making any announcements of where this dossier will go next. What I do wish to express is how happy I am that this first meeting was such an unqualfied success. We now have the momentum to continue seeking solutions.

Congratulations! You have so much useful information, write more.

Do you desire a house but you lack enough cash to acquire it?

Hi, I congratulate you on Merry Christmas!

Loosen up! It's not worth getting upset about.

You write well will be waiting for your new publications.

Hi Merry Christmas and Happy New Year, a cool site I like

With the new 2011. Year! Congratulations.

Happy New Year! The author write more I liked it.

It's a shame that very little empirical evidence is known on this question. I've been working on some experiments, but need to finish up those working papers with the results.

Its very nice to read such a fantastic post like this. I am very much happy that I found this blog. I enjoyed reading every little bit of it.Some interesting and well researched information on cameras. I’ll put a link to this site on my blog. Thanks for sharing.

It is a very informative and useful post thanks it is good material to read this post increases my knowledge.

WOW judt what I was looking for. Came hete by searching for Ugg Bailey Buton Boots