Home Categories Posts by email Search
Itcush to run for NDP in Mount Royal
Support on Trap, Spay, Neuter and Release from B.C.

Short-term pain, for long-term gain. That is how I described the work that was carried out on Kildare Road during the month of July and completed in early August. Congratulations to everyone involved, specifically the city’s engineering department and the companies hired to carry out the work.

Two winters ago we had several water main breaks on Kildare Road. While the problems were repaired, it was clear we needed a more comprehensive solution. I gained the city council’s support to have this job moved up in the schedule at a cost of $426,000. Now that the work is completed the pipes shouldn't need to be repaired or replaced for approximately 50 years. 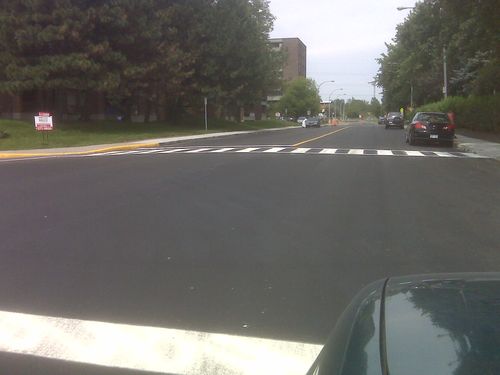 There have been some bonuses added to this project. An additional $26,000 was secured to finally fix the stretch of pavement from Rembrandt to Cavendish. How many motorists justifiably complained about the bumpy road? Well, it is just perfect now.

We were also able to respond to the request from nearby residents to install a crosswalk and two stop signs at the corner of Kildare and Sir Walter Scott. I wish to thank Councillor Glenn J. Nashen, Mayor Anthony Housefather and Traffic Engineer Charles Senekal for their unconditional support on this matter. Charles, in fact, took part in two walkabouts with myself and residents of Ilan Ramon Crescent. Hats off to residents Lorne Lieberman and Boris Myschkowski who worked with me to keep this option open. This is a wonderful plus in the area of traffic safety in District 2.

I have been receiving a lot of warm comments from residents. Here is what Phil Matlin, a resident of Rembrandt Avenue and a new blogger (check out http://perfectmagic.wordpress.com/) had to say.

"A little note to tell you that I think the job done recently on Kildare should be used as an example to all cities, towns, boroughs, especially the City Of Montreal on how to plan and coordinate projects such as these. This major work was done with almost no inconvenience to the residents, at least on the Rembrandt side where I live. Personally, I suffered absolutely no inconvenience. You, the council, mayor, engineering department and whom ever else was involved, deserve our highest praise, thanks and kudos for a job well done."