It was my privilege once again to co-chair (with Sam Goldbloom) the annual Côte Saint-Luc Seniors Golf Open (formerly Golf Outing) at Meadowbrook Golf Course on July 13. I go back more than 20 years with this event, originally as the emcee for the banquet. And it has never been rained out. Well on this morning there was reason to be pessimistic. The sky was dark and as I arrived to join my foursome of Jack Kadaner, Mike Rabinovitch and Sam Rappaport, the rain began to fall.

It certainly did a number on my friend Sam, who called to say he was not prepared to risk his game of golf fgiven the forecast of thundershowers. As I got my gear together the rain stopped and our game began. The sun came out and as we moved through the nine holes it was baking hot,

I am not a golfer. In fact I only play the game once a year - at this event. Thankfully my golfmates Jack and Mike did not tally my score.Nonetheless,  I had a lot of fun getting to know these two gentlemen. Jack is 84 years young and in sensational shape. He is the dad of the lovely Reesa Kadaner, who makes kippas and other items for simchas.  Mike is a retired software manufacturer,  whose wife Carol is an acclaimed artist. We are pictured below, in a nice shot taken by ace photographer Rami Negev. After the game everyone returned to the Seniors Centre at the CSL Shopping Centre for the banquet, which is always a blast. There were sandwiches and danish from the Snowdon Deli and lots of doorprizes, Bell Canada served as our official sponsor. They were represented by Pascal Harvey, a sharp looking 41 year old afather of four who was actually celebrating his birthday.  In order to be eligible for a prize I played Let's Make Deal to get a few candidates up front. Sam and Mayor Anthony Housefather then asked some tough questions to deterimine the winner.

As for the trophies, Carol Foster was closest to the pin for the women, with Patricia McWilliams as runnerup.  Israel Gossak and Jack Nutkevitch finished one, two in the men's category. For longest drive, Judith Weber took the ladies category, with Helen Zafran second.  Morris Seidman was top's in men, followed by Laurence Gossak. Councillor Goldbloom and I are pictured below with Pascal Harvey, Foster and McWilliams. 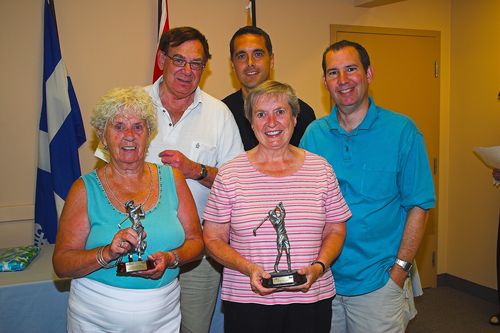 He is a good friend that speaks well of us behind our backs.
*_*

Some thought that maybe the Raiders could stay, if they made a deal with Santa Clara, to share a park like the Giants and Jets do....a pact with the Devil, just seems horribly wrong.

Yoou made some really good points there. I looked on the web for more info about the issue and found most people will go along with your views onn this web site.

I seriously love your site.. Great colors & theme. Did you make this site yourself? Please reply back as I'm trying to create my very own blog and would love to learn where you got this from or exactly what the theme is named. Thank you!