Canada Day is special in CSL

Nobody does Canada Day better than Côte Saint-Luc. From the time I was young child, growing up in the community I have always called home, the July 1 celebrations were a major highlight for me. There was a time when all of the action in the city was centered around Kirwan Park, sandwiched between Wentworth and Blossom avenues.  I lived right next door. With the construction of the much larger Centennial Park, eventually renamed after Pierre Elliott Trudeau, all activities switched over there. 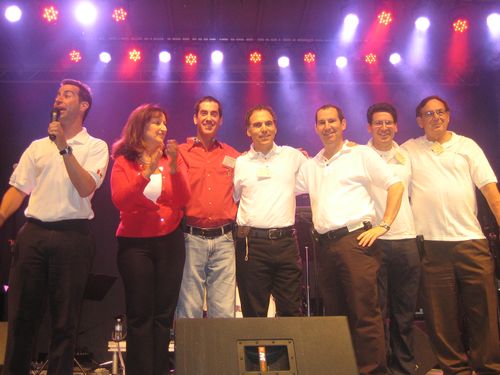 When Mother Nature cooperates, as she did this year, there is no better place to be. It gave me great pride as a city councillor to be at Trudeau Park for our action-packed evening. Proceedings began witha Canadian Citizenship Ceremony, presided over by Judge Marcel Tremblay. The former Montreal city councillor was just appointed to the position last week. He swore in 32 new Canadians from 11 different countries. Councillor Mitchell Brownstein, an immigration lawyer, brought this type of ceremony to our Canada Day festivities a few years ago. It is a perfect fit.

Next was the annual Human Rights Walkway ceremony. The Human Rights Walkway was inaugurated in 2000 and is dedicated to men and women who, through their actions, have promoted and defended human rights. This year we honoured those who spoke out and fought for Jews oppressed in the former Soviet Union, Syria, and Ethiopia. Fellow councillor Glenn J. Nashen (seen unveiling the plaque with me below) co-chaired this initiative with me. We were both very involved in these movements in the late 1980s via Canadian Jewish Congress. I worked at as national director of communications while Glenn was a volunteer and co-chaired the Jews in Arab Lands Committee.   It was nostalgic to have lawyer Stan Cytrynbaum with us at the ceremony. Stan chaired the Ethiopian Jewry Committee and put his heart and soul into the movement. 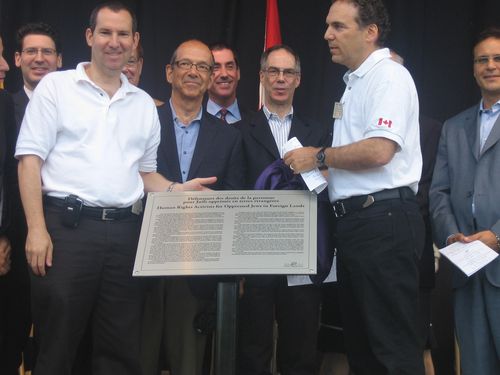 Go to the Côte Saint-Luc website to see a terrific documentary prepared by our Director of Public  Affairs and Communications Darryl Levine. In addition, Darryl posted highlights from the actual ceremony, which you can see here.

This was the 10th plaque unveiled on the walkway.  Many of the past honourees have been people who put their lives on the line in many parts of the world. By selecting a movement of people—many of them local—we wanted to highlight the fact anyone, anywhere can help those in need, even from the safety and comfort of our suburban homes in Canada. Professor  Irwin Cotler, Stan Cytrynbaum, and Judy Feld Carr—an unassuming former music teacher and grandmother of 10 who was responsible for the rescue of 3,228 Jews from Syria over 28 years—are three examples of a movement that helped rescue hundreds of thousands of people.”

Here is a video of the ceremony, via CSL TV:

As for the overall Canada Day ceremony, there were thousands of people at the park to enjoy  fun and games, music and performances. There were a variety of food kiosks setup and of course, everything culminated with a spectacular fireworks display –perhaps one of the best we have seen in years.  I must say there is nothing quite like standing on the stage with the mayor and city council and looking out into the audience and a sea of people. Mayor Anthony Housefather was correct when he told those with us that night who do not live in Côte Saint-Luc to consider moving here. We are a vibrant community, one that will soon have a $17 million aquatic complex and a new housing development at the Cavendish Mall.

Thanks to Dan Laxer of CJAD Radio who was back as our master of ceremonies.  Congratulations to co-chairs Mitchell Brownstein and Ruth Kovac and our staff at the Parks and Recreation Department.

Since the habit is master of life, people should strive to seek good habits. If you are in the habit of youth is starting, it is the most perfect habit, it is certain that we called education. Education is a kind of habit of starting from an early age.

I do consider all the ideas you've presented to your post. They're really convincing and can definitely work. Still, the posts are very short for novices. Could you please lengthen them a bit from next time? Thanks for the post.

Hey there! I've been following your site for a while now and finally got the bravery to go ahead and give you a shout out from Huffman Texas! Just wanted to mention keep up the good work!

Excellent goods from you,man. I have be aware your stuff previous to and you are just extremely wonderful. I actually like what you have bought right here, really like what you are stating and the way through which you are saying it. You're making it enjoyable and you still care for to keep it sensible. I can not wait to read much more from you. This is actually a tremendous site.

A motivating discussion is worth comment. I think that you should write more on this subject matter, it may not be a taboo subject but generally people do not discuss these subjects. To the next! Best wishes!! http://thedietdominator.com/forum/profile/Jeremiah8

Greetings I am so happy I found your web site, I really found you by mistake, while I was browsing on Digg for something else, Regardless I am here now and would just like to say thanks for a tremendous post and a all round interesting blog (I also love the theme/design), I don't have time to read it all at the minute but I have book-marked it and also included your RSS feeds, so when I have time I will be back to read more, Please do keep up the fantastic work.

You really make it seem so easy with your presentation but I find this matter to be really something which I think I would never understand. It seems too complex and very broad for me. I am looking forward for your next post, I will try to get the hang of it!

My brother recommended I might like this web site. He was entirely right. This post truly made my day. You cann't imagine simply how much time I had spent for this information! Thanks!

Hello there! I simply want to give you a huge thumbs up for the great information you've got right here on this post. I will be returning to your site for more soon.

Hello to every single one, it's genuinely a pleasant for me to pay a visit this web page, it consists of important Information.

My brother suggested I may like this website. He used to be totally right. This publish truly made my day. You cann't consider simply how a lot time I had spent for this information! Thank you!

I don't know if it's just me or if everybody else experiencing issues with your website. It looks like some of the text on your content are running off the screen. Can someone else please comment and let me know if this is happening to them too? This might be a issue with my internet browser because I've had this happen before. Kudos

My brother recommended I might like this blog. He was totally right. This post truly made my day. You cann't imagine just how much time I had spent for this info! Thanks!

First published 18th began in June 1999, Counter-Strike being a simple fan-produced mod. According to Le, Fans would hate it if Counter Strike 2 could be completely different in comparison with all the original, which's why he left the company. A certain lotion that's often used by body acne breakouts can be Alpha Hydroxy which is definitely an effective method to treat mild to acne that is severe conditions.

Wanted - Get the best personal rank that is certainly possible within the multiplayer setting. They almost haven't been lost, is frequently surprising to the industry when release something. Golf perform cheats for gta 4 xbox was already launched alongside features by using Xbox live including Ps3 on July 08.

The remaining portion with the group endeavors to adhere on approximately living to die as well as dying to reside. Remember to make off your thermostat when you check out work when you check out bed. Mediaeval Christian art of saints, prophets, and also the Holy Trinity, along with the gods and devas of Egypt, India and also the South American Indians in many cases are depicted with the exact same hand positions.