Is 940 AM about to be ressurrected? Tietolman and Tétreault bid for Corus

For more than four decades my father, Lawrence Frederick Cohen (a.k.a. Larry Fredericks), worked for radio stations CKVL AM and CKOI FM (originally CKVL FM). He began his career as a radio announcer and eventually found himself in the accounting department when CKVL went from an English to a French station. For most of this time CKVL was owned by the Tietolman family. They sold the AM and FM stations to the two Pierres – Arcand and Beland – who eventually purchased a number of other outlets and sold out  to media entertainment giant Corus Entertainment. 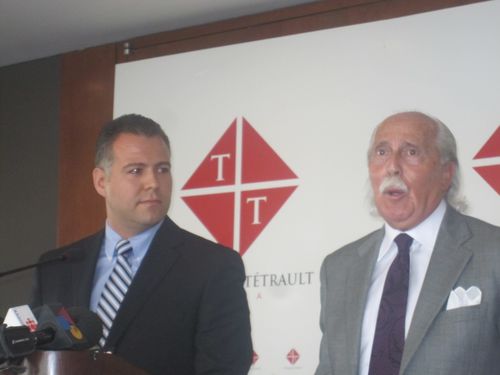 Jack Tietolman was the patriarch of the family. Two of his sons, Maurice and Paul, were also involved with the operation. I have seen Paul often over the last few years.  His beautiful daughter married one of my neighbours and she is now a constituent of mine in my city council life.

Whenever we meet, even as he danced at his daughter’s wedding, Paul told that the day would come for him to return to the local radio scene.  On the evening of June 7 I received a telephone call. “Mike, this is Paul Tietolman,” he began. “I told you I would contact you when I had news. Well I have news. Be at the law firm of Fasken Martineau Walker at 10:30 tomorrow morning. I am holding a press conference.”
“Are you going to bring the 940 AM dial back to life?” I asked.

Well Paul did indeed have a blockbuster announcement. Not only has he established Tietolman Tétrault Media with noted entrepreneur and former Montreal city councillor Nicolas Tétrault (above left), but the duo have put together an  offer of $81 million to purchase the 11 Quebec radio stations owned by Corus. These include Q 92.5 FM, CKOI. CHMP 98.5 FM and  CKAC 730 AM in Montreal; CFOM FM  and CFEL FM in Quebec City; CHLN FM in Trois-Rivieres; CIME FM in St. Jérome; CJRC in Gatineau; and CHLT and CKOY FM in Sherbrooke. For an additional sum of money, they have also offered to purchase the Saguenay station (CKRS FM) currently owned by Corus, along with the equipment and facilities that were used for the activities of AM 690 and 940 AM stations before they were shut down in March.

Cogeco Media  recently signed   an agreement with   Corus. to acquire its Quebec radio stations for $80 million in cash, subject to customary closing adjustments and conditions, including approval by the Canadian Radio-television and Telecommunications Commission (CRTC). Tietolman said he and Tétrault have been working on their proposal for a year and a half, including  obtaining the necessary financial backing and partners.  He believes the CRTC has to view his proposal as a superior one to that of Cogeco.

“It preserves the jobs associated with 11 radio stations contemplated by the offer,” Tietolman said. “It ensures the continued operations of the Saguenay station and it will re-launch the activities of AM 690 and 940 AM.”

For me, that was the most significant announcement of the press conference. Even if the CRTC chooses Cogeco over Tietolman Tétrault, it appears almost definite that we will get another English language radio station back on the air. Let’s remember that 940 was originally at the AM 600 dial and know as CFCF Radio as in Canada’s First, Canada’s Finest. Corus let it die a slow death by changing its news and talk f format to oldies.

Tietolman would not confirm what formats he has in mind to revive 940 and 690. “When you hear the concept you will be floored,” he said. “Nobody in the country is doing this and once we get started, you will see it replicated in the top 50 markets in the USA. Right now 940 and 690 look like the weakest chain in the link of stations we intend to own. They will end up being the strongest. Just watch!”
I asked Tietolman if there is hope for us to see the radio voices we so much miss, folks like Peter Anthony Holder, Kevin Holden, Kathy Coulombe, Suzanne Desautels and even Paul “Tasso Patsikakis” Zakabe.  Yes, he said, the format would be amenable to some of these personalities getting back on radio.
But in a statement Tuesday, Corus said the stations are no longer up for grabs: “Corus has entered into a binding agreement with Cogeco which is subject only to the usual regulatory approvals. Therefore we are not in a position to consider any other offers at this time.”
Well let us hope the CRTC says otherwise.

Bravo to Tietolman and Tétrault. Let’s hope they succeed.

I'm shocked to find out how much of information I received on this matter. I m so extremely thankful of you. The one thing I can claim that, after reading this article I got preserved from the total ineffective search I ought to have made on this specific issue. Your post is a serious blessing in disguise.

*An appreciation of learning, is a study in good faith.

I received 1 st mortgage loans when I was not very old and this supported my family very much. But, I need the consolidation loans once more time.

This article explains how to create and save an xml file, and then how to bind it to a treeview, but I think it falls far short of what the title promises.

I'd actually love to review these boxes on my shopping/lifestyle blog. i wonder if they'd send me a sample box to talk about?

So fun article is! I know more from it.

It's a pity more people aren't looking for journalists in Northern Ireland! Maybe I should point them to this blog. Thanks for taking the time to write it.

Once again great job. You seem to have a good understanding of these themes.Come on and keep your writing blog.expecting something more attractive.

I can gain the tips from this paper what I need.

Just simply want to point out Now i http://www.coachitiba.com/ am thrilled that i happened in your website!

I like to have a read at it, highly comments on it.

Common flag holding admission of eight people in the United Nations Secretary-General Ban Ki-moon, Ali,レイバン 店舗 Olympic flag, then l Olympic flag,レイバン ウェイファーラー played the Olympic theme song, athlete representative and the referee on behalf of an oath, flying dove of peace. The last link in the ignition, レイバン メガネthe torch from a speedboat carrying Beckham sent to London, bowls, rowing Olympic gold medalist Redgrave took the torch, after passing over a period of, to the seven young people to pass each other, and finally they received over six torchbearers in the torch, each torch is lighted,レイバン めがね and they ran together to the stadium the central lit each "petal" given to each delegation. petals final rising close together to become the main torch .

I like to have a read at it, highly comments on it.

I love black hat and spambuilding! No just a joke! Thanks for your comic!

In the neuter agitation today.

Wow so nice! I like this site. Keep it working every day.

thank u for good article....

each time i used to read smaller content which also clear their motive, and that is also happening with this post which I am reading at this place.