More than 13,000 people attended the annual  Israel Independence Day rally in downtown Montreal April 20, with most of those in the crowd marching in unison from Phillips Square to Place du Canada – locations familiar to those who were active in years past with the Soviet Jewry movement.
As the  marchers arrived they were greeted by singer/entertainer Benzion Rafaely and a group of dancers. People of all ages waved large Israeli  flags in the bright sunshine which has accompanied this event for the last few years. 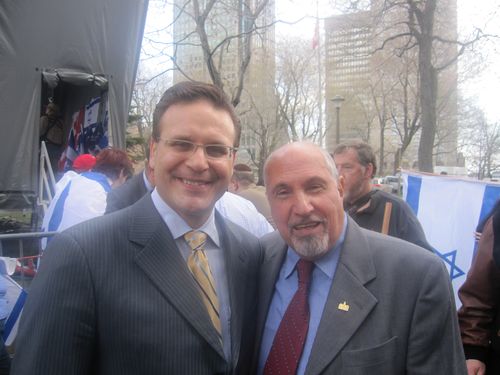 Organizers from the Jewish Community Partnership, notably co-chairs Amos Sochaczevski and Ariela Cotler of Côte Saint-Luc, made a conscious decision to keep the speeches to a minimum. Beryl Wajsman, the editor of The Suburban Newspaper and president of Montreal’s Institute for Public Affairs,  served as the emcee and he managed to keep his promise and limit the speeches to about 12 minutes in total.

Israel Consul General Yoram Elron, Conservative Senator Leo Housakos (seen above with Saint-Laurent Councillor Maurice Cohen), Liberal MP Marc Garneau and Montreal  Mayor Gérald Tremblay each touched on all of the right words as the crowd cheered loudly. Liberal MPs Irwin  Cotler and Raymonde Folco were on hand, as were a number of municipal elected officials. This included Côte Saint-Luc Mayor Anthony Housefather, myself and fellow councillors Sam Goldbloom, Mitchell Brownstein, Steven Erdelyi and Dida Berku. Council meeting regular Irving Itman was on hand wearing a neat cap that said "Hawaii" on top.
“I see many more of you this year than last year,” said Elron. “This blue and white flag is a reminder that destiny is in our own hands.” 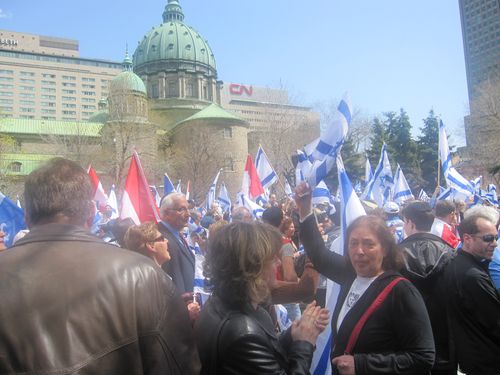 Garneau read a message from party leader Michael Ignatieff while Housakos, pinch hitting for Treasury Board president Stockwell Day, brought greetings from Prime Minister Stephen Harper. “Stephen Harper has been steadfast in his support of Israel, not based on anything but principles,” he stated. “He did not do so for political expediency.”


Mayor Tremblay remarked  how “everytime I come here you say ‘thanks.’ The reason I come is to say thanks for being who you are.”

There was a heavy police presence, including officers on horseback, but no incidents.

“The Middle East has rough times for 62 years and we're here to show our support for the state of Israel," Sochaczevski told reporters.

These observations I have thought it material to offer to you; and if, in the execution of your duty, any difficulty should arise, I should be very glad to give you any assistance which is in my power.

Thistiewood, and Keens, was laid before them and read. It is, of necessity, from the nature and form of such indictments, extremely long.

I am sure you will give this high and heavy charge the fullest and fairest investigation; and you will not return a bill against all or any of these persons

I shall give thee unto this people.And now behold, my brethren, this is the word which I declare unto you, that many of you have begun to search for gold

Think of your brethren, like unto yourselves, and be familiar with all, and free with your substance, that they maybe rich like unto you.

And, O that ye would listen unto the word of his commands, and let not this pride of your hearts destroy your souls.

I cause to be burned with fire.And now, behold, my brethren, as I said unto you that I would prophesy, behold, this is my prophecy

how cursed are they who shall be cast out into their own place! And the world shall be burned with fire.

but as many as will not harden their hearts, shall be saved in the kingdom of God. Wherefore, my beloved brethren, I beseech of you in words of soberness

for when these gentry are closely pressed, as to the substance of their knowledge, they will talk of Henry the Fourth of France being contemporary with Henry the Fowler of Germany

I am sorry there should be any thing like doubt in the case/ replied Emma; 'but am disposed to side with you, Mr. Weston.

If you think he will come, I shall think so too; for you know Knsrombe.''Yes—I have some right to that knowledge; though I have never been at the place in my life.

She is an odd woman! But I never allow myself to speak ill of her, on Frank's account: for I do believe her to be very fond of him.

Dressed in civilian clothes, leisure and shopping bag, the choice of lively shapes, bright colors of the bag or backpack, with a light heart and dress to match. Participate in the dinner and other formal occasions, should use the more elegant bag, then it will match with the dress, but also master polite. Attended the banquet is best to use a hand pull or back bag, do not hand the bag in order to avoid the exchange of business cards or take dining points, resulting in trouble.

Thank You for Sharing this to us, i wonder to know more about the author of this post.

Right now it sounds like BlogEngine is the top blogging platform out there right now. (from what I've read) Is that what you're using on your blog?

If you are going for finest contents like myself, simply go to see this web site every day as it gives feature contents, thanks

You've made some good points there. I looked on the web to find out more about the issue and found most individuals will go along with your views on this web site.