Here is a press release that was issued after my meeting with Bialik students:

A reconstituted Student Traffic Committee from Bialik High School  will soon begin formulating recommendations to their own administration and Côte Saint-Luc City Hall to make the area around their facility safer and to ensure that motorists abide by existing traffic regulations. 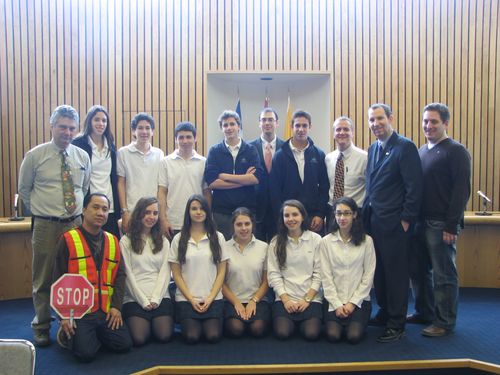 The committee of 10 students, accompanied by Principal Andrew Trager, Head of Building Facilities Maintenance and Security Florian Gaudreault,  Communications Officer David Smajovits and crossing guard Larry B. Rosario, came to Côte Saint-Luc City Hall recently for a meeting which touched upon a number of traffic issues. They were hosted by City Councillor Mike Cohen, whose District 2 encompasses Bialik City. Traffic Engineer Charles Senekal and Director of Public Safety Jordy Reichson joined Councillor Cohen in providing students with some background about the traffic dossier.

After Councillor Cohen was elected to office in November 2005 one of the first issues he tackled was the traffic situation at Bialik. “I have received nothing but cooperation from the Bialik administration,” he remarked. “I believe we have seen a lot of improvements. At the same time we recognize the fact that with more than 700 students in this building and most of them being dropped off and picked up at the same time, it is not an easy situation to manage.”

Local Police Station 9 and Côte Saint-Luc Public Security have  been paying closer attention to the area, enforcing existing traffic regulations.  Previous Bialik Student Traffic Committees have conducted studies and submitted recommendations to Mr Senekal, which have been implemented. This includes using traffic plates to monitor speeding, adding new signage and street  lines where merited and introducing a drop zone on Marc Chagall Avenue. Attention has also been given to student pedestrians and whether they are abiding by the laws correctly, especially when crossing the street. The Bialik administration, meanwhile, enacted some new rules as well this year. Prior to the start of classes, the license plate  numbers of each parent had been recorded.  Special  “Bialik traffic tickets”  have been issued to any family member associated with the school recorded as  breaking a traffic rule. 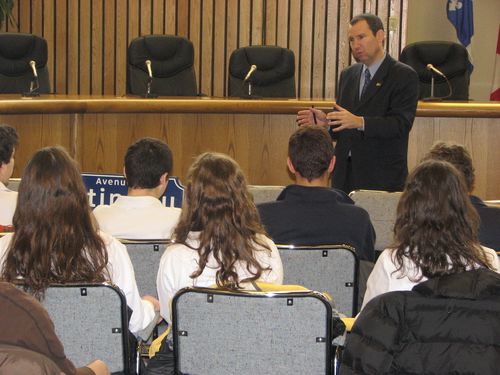 Councillor Cohen  told the students that major construction work  to replace the underground piping is expected  to commence on Kildare Road, between Cavendish and Merrimac leading to the school, soon after  classes conclude at the event of June. In recent years there have been several   breaks of the aqueduct. Plans call for the  replacement of 200 meters of eight inch pipe at a substantial cost.  “We have planned this specifically to coincide with the Bialik summer holiday,” said Councillor Cohen.

Mr. Senekal explained to the students how decisions are made to repair streets and sidewalks. He even brought some corroded pipes to show them. In addition,  he provided background on other matters such as the annual repair program for fire hydrants, the Cavendish pump station , the use of traffic calming measures like  bollards and speed humps and the change of  speed limits from 50 to 40 km per hour. He took questions from students on a number of traffic issues which affect them. One dealt with the synchronization of lights on Cavendish Boulevard and the  long lineup of cars trying to turn right in the morning.  In order to avoid that turn, some  parents are going straight on Cavendish, turning on to Mackle and then Marc Chagall. Mr. Senekal said adjustments will be made to the system, especially for the key drop off and pickup times.

Mr. Reichson, who oversees Public Security, Emergency Medical Services, Volunteer Citizens on Patrol, the city’s dispatch centre and disaster planning, agreed that traffic problems emanate from Bialik mainly because of its location at the end of a dead end street (Kildare Road) and situated within a residential area. Soon, he warned, the Beth Chabad Community Centre and Synagogue, will be operating across the street. This will, at times, exacerbate the situation. He said that his Public Security Department will continue to keep a close eye on the Bialik area.