How the Sports Celebrity Breakfast Began

I had the privilege of serving as co-emcee of the sixth annual Cummings Jewish Centre for Seniors (CJCS) Sports Celebrity Breakfast on March 28 at the Gelber Centre. Close to 600 people were on hand, raising about $115,000 for seniors in crisis.

From day one I have served on the organizing committee of this event. It all began with a call from former Côte Saint-Luc City Councillor Harold Greenspon. He was vice-chairman of the CJCS at the time. “I want to start a Sports Celebrity Breakfast,” he said. “Will you help me?”

This call came  at the same time Côte Saint-Lucers had voted to demerge from the City of Montreal. While it was still a year and a half before a vote to elect a reconstituted Côte Saint-Luc council, I asked Harold if he had plans to run.

“Then I will make you a deal,” I responded. “If  I help you get this breakfast off the ground, will you endorse me as your successor in District 2?”

A deal was made and Harold and I began to plan. We assembled a small committee and set the following spring as our objective. The intent here was to break even and give the community a star studded event they could enjoy.

We sold 400 tickets for the first event and managed to raise a few thousand dollars.  The following fall Harold backed my election bid and I won by a 92 percent margin, in Côte Saint-Luc District 2. While our agreement was only for one year,  I found this experience too enlightening to give it up. We made $10,000 at the second event.  That year we decided to add a “guest of honour” to the agenda in former Canadiens coach Jean Perron, for his role in guiding the Israeli national team. Susequent honourees  were  Alouettes president Larry Smith, Canadiens legend Guy Lafleur, Canadiens president Pierre Boivin and  this year Montreal Impact president Joey Saputo. 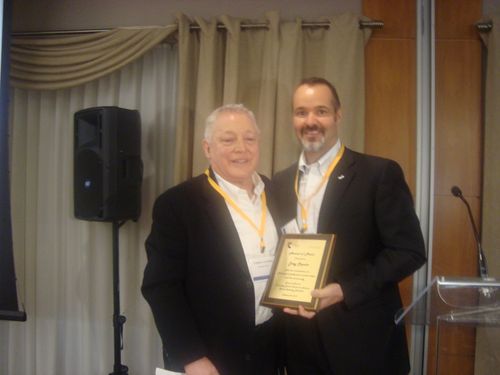 When Harold surrendered the chairmanship to Michael Wagen, the  senior vice-president and chief operating officer of Delmar International,  the fundraising aspect exploded.  With invaluable staffer Susan Rozansky coordinating the event and the CJCS Foundation playing a more important  role, we had a marquee “happening” on our hands.  Members of the local sports media began to call me to see if they  could  attend.

Among the media attending were  Stu Cowan and Herb Zurkowsky  from The Gazette, Paul Graif from CTV and K103 FM,   Abe Hefter from CJAD, veteran broadcaster Jim Bay,  CKAC’s (and former Alouette)  Gabrielle Grégoire and Andie Bennett, Mitch Melnick and  Noel Butler from THE TEAM 990.
By selling corporate tables, organizing a top-notch raffle and silent auction and  publishing a souvenir program book, Wagen has made this one of the most successful breakfast fundraisers in the community. Having noted lawyer Morden “Cookie” Lazarus as honourary chair provides us with one of the more well connected personalities in town. Cookie has the contacts and our committee benefits.

This year’s event was videoed, including the dramatic opening introductions and a classic interview by Melnick and Bennett with Elmer Lach.  It brought the house down.  We hope to find a way to post it online.
I do want to conclude that the genesis of this breakfast was in Côte Saint-Luc.  The city organized a few of its own such events and so did Beth Zion Congregation. I worked on the latter with Joe Presser.  It provided us with the template for the successful CJCS Golden Age of Sports Celebrity Breakfast. Joe Presser, incidentally, was one of the first people I asked to be on the committee. He is also a constituent of mine in District 2.

The fact that art is so close to sports in some situations is probably related to the nature of sports. The definition of "sports" above put forward the idea of an activity pursued not just for the usual purposes, for example, running not simply to get places, but running for its own sake, running as well as we can.

One word frees us of all the weight and pain of life--that word is love.

Blogs are designed according to the latest Keyword algorithm update - So the links on them gives great results.

Payment will be received through PayPal only after reporting with the completion of work.


Waiting for your response !

P.S. This is an advertisement and a promotional mail strictly on the guidelines of CAN-SPAM act of 2003. We have clearly mentioned the source mail-id of this mail, also clearly mentioned the subject lines and they are in no way misleading in any form. We have found your mail address through our own efforts on the web search and not through any illegal way. If you find this mail unsolicited, please reply with "Remove" in the subject line and we will take care that you do not receive any further promotional mail.

I'll immediately take hold of your rss feed as I can not to find your e-mail subscription hyperlink or newsletter service. Do you've any? Please allow me recognize in order that I could subscribe. Thanks. http://flydaeng.com/xe/graphic/32350

Nice post. I was checking constantly this blog and I'm impressed! Very helpful information specially the last part :) I care for such info much. I was seeking this particular info for a very long time. Thank you and best of luck.

When I originally commented I clicked the "Notify me when new comments are added" checkbox and now each time a comment is added I get four e-mails with the same comment. Is there any way you can remove me from that service? Many thanks!

Hi, I do think this is a great website. I stumbledupon it ;) I will return yet again since I saved as a favorite it. Money and freedom is the best way to change, may you be rich and continue to guide others.

It's remarkable designed for me to have a web site, which is valuable in favor of my knowledge. thanks admin

Every weekend i used to visit this web site, for the reason that i want enjoyment, since this this website conations in fact nice funny stuff too.

Hmm is anyone else having problems with the images on this blog loading? I'm trying to figure out if its a problem on my end or if it's the blog. Any suggestions would be greatly appreciated.

I usually do not write a bunch of remarks, however after reading through some of the comments on MikeCohen.ca: How the Sports Celebrity Breakfast Began. I actually do have a few questions for you if you don't mind. Is it just me or do some of the remarks look like they are written by brain dead people? :-P And, if you are writing on additional sites, I'd like to follow you. Would you post a list of the complete urls of all your social pages like your twitter feed, Facebook page or linkedin profile? http://www.stylesdb.de/demo/phpBB2/profile.php?mode=viewprofile&u=32229

Unquestionably believe that that you stated. Your favorite reason seemed to be on the net the simplest factor to bear in mind of. I say to you, I definitely get annoyed at the same time as other people think about issues that they plainly do not know about. You managed to hit the nail upon the top and also outlined out the entire thing with no need side effect , folks can take a signal. Will probably be again to get more. Thank you

I am sure this post has touched all the internet visitors, its really really fastidious post on building up new webpage.

I loved as much as you will receive carried out right here. The sketch is tasteful, your authored subject matter stylish. nonetheless, you command get bought an shakiness over that you wish be delivering the following. unwell unquestionably come further formerly again as exactly the same nearly very often inside case you shield this hike. http://sopkorea.co.kr/xe/?document_srl=113900

Thanks for sharing your thoughts on Joey Saputo. Regards

It's awesome for me to have a site, which is beneficial in favor of my knowledge. thanks admin

Wow! After all I got a weblog from where I be capable of actually get valuable facts regarding my study and knowledge.

Thanks for ones marvelous posting! I definitely enjoyed reading it, you may be a great author. I will remember to bookmark your blog and definitely will come back from now on. I want to encourage one to continue your great posts, have a nice weekend!

I have been surfing on-line greater than 3 hours these days, yet I by no means discovered any fascinating article like yours. It is beautiful price sufficient for me. Personally, if all webmasters and bloggers made good content material as you probably did, the net can be much more helpful than ever before. http://www.aac1899.com/node/38607

I have to thank you for the efforts you've put in penning this blog. I really hope to check out the same high-grade content from you in the future as well. In truth, your creative writing abilities has encouraged me to get my very own site now ;)

Hey I am so delighted I found your blog, I really found you by error, while I was browsing on Digg for something else, Anyways I am here now and would just like to say thanks a lot for a fantastic post and a all round interesting blog (I also love the theme/design), I don't have time to go through it all at the moment but I have book-marked it and also added in your RSS feeds, so when I have time I will be back to read a lot more, Please do keep up the excellent work.