When Rabbi Sidney Shoham retired  in 2006 from  Beth Zion Congregation in Côte Saint-Luc, after more than 50 years at the pulpit, the very difficult search began for his successor. A year later Rabbi Ira Ebbin was hired. Young, charismatic and full of energy, he made a very favourable impression.

I am saddened to learn that less than three years after his arrival, Rabbi Ebbin (seen below with me soon after his arrival)  is about to leave his post for what must have been an offer he just could not refuse in Long Island, New York (Ohav Shalom in Merrick, NY).  Beth Zion, under the stewardship of executive director Sheldon Weinstein, was just getting back its footing. Despite a large drop in membership, the combination of   Rabbi Ebbin and Weinstein was paying off. New  members were coming aboard. The facility itself underwent somewhat of a facelift, with the main auditorium and the entranceway spruced up very nicely. Blossom  By The Plaza became the official in-house caterer. 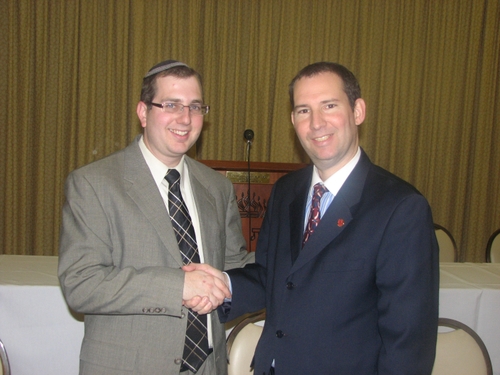 Prior to  arriving here, Rabbi Ebbin   served as the  spiritual leader of the Young Israel of Stamford, in Connecticut. Previously, he had served as the Assistant Rabbi of Congregation Anshe Sholom in New Rochelle, NY. He was the Immediate Past President of the Board of Rabbis for the UJF of Stamford, New Canaan, and Darien.   He and  his wife Chevi (Shurin) grew up in Brooklyn, N.Y., and they are blessed with three daughters, Shlomit, Shira Nacha, and Anat Shoshana.  It is understandable that this new offers allows them to return home.

So Beth Zion once again begins the difficult search for a rabbi. Will Rabbi Shoham, still the rabbi emeritus, return on an interim basis? Stay tuned.

In terms of education, respect for officers is a duty of citizens, however, day by day the streets are problems between people and traffic officers, or police, this situation should change, for me it should implement best punishment for the person who disrespects a public servant. thanks for letting me express myself ..

It sounds so good.*

It sounds so good.*

You are so awesome! I do not believe I have read through anything like this before. So wonderful to find someone with unique thoughts on this issue. Really.. many thanks for starting this up. This website is one thing that is required on the web, someone with some originality!

Hi there, after reading this awesome paragraph i am as well happy to share my know-how here with friends.

Excellent items from you, man. I have have in mind your stuff prior to and you're simply extremely wonderful. I actually like what you have bought right here, certainly like what you're stating and the way wherein you say it. You're making it entertaining and you still care for to stay it wise. I can not wait to read much more from you. That is really a wonderful site.

Thank you for another informative site. The place else could I get that type of information written in such an ideal approach? I have a undertaking that I am just now working on, and I have been on the look out for such information.

I got this web site from my pal who informed me regarding this site and now this time I am visiting this web page and reading very informative content at this time.

Just desire to say your article is as surprising. The clearness in your post is just spectacular and i can assume you are an expert on this subject. Well with your permission let me to grab your feed to keep up to date with forthcoming post. Thanks a million and please keep up the rewarding work.

Very nice post. I just stumbled upon your blog and wished to say that I've truly enjoyed browsing your blog posts. After all I'll be subscribing to your rss feed and I hope you write again soon!

Your means of describing everything in this article is actually fastidious, all be capable of without difficulty understand it, Thanks a lot.

Simply wish to say your article is as astounding. The clearness in your post is just excellent and i could assume you are an expert on this subject. Well with your permission allow me to grab your RSS feed to keep updated with forthcoming post. Thanks a million and please carry on the gratifying work.

Great beat ! I would like to apprentice at the same time as you amend your web site, how can i subscribe for a weblog web site? The account aided me a acceptable deal. I had been a little bit acquainted of this your broadcast provided brilliant clear idea

Posted by: http://www.websiteaccountant.es/schuesslersalzezumabnehmen.hjahns.de | November 20, 2013 at 03:09 AM