Teen singing sensatiom Nikki Yanofsky’s career continues to blossom. With her first studio album due out in the spring and just having come off two tours to the Orient, the energetic Hampstead resident will now be getting some truly worldwide exposure as the voice behind the official theme song for the 2010 Vancouver Winter Olympic Games. he theme music, written for Vancouver 2010 broadcasts by Canada’s Olympic Broadcast Media Consortium, has evolved into an original song that was released at the end of January to radio stations across the country and made available for download on I-Tunes. 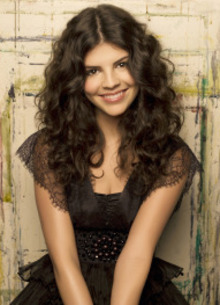 How did this all come about? "I don't remember exactly when, but I met Stephan Moccio at the Juno Awards last year and I guess we were on each others radar," she told the Jewish Tribune. " I kinda learned the words and the melody at the same time. What can I say- what an incredible honour! I am speechless."

The song is just such a universal message," she remarked. "It doesn't even need to be applied to the Olympics. It's really just about believing in yourself and your talent, and that when you're down, there's people around you that really do support you. It's really something I believe in. Pardon the pun."

An EP, distributed by Universal Music Canada, hit stores on February 2 containing three versions of the song: I Believe, J’Imagine and the instrumental track, as well as behind-the-scenes footage of the music/recordings in the making.

My spouse and I stumbled over here by a different website and thought I may as well check things out. I like what I see so now i'm following you. Look forward to looking at your web page again.

I've been surfing on-line greater than 3 hours as of late, but I never discovered any fascinating article like yours. It is beautiful price sufficient for me. In my view, if all web owners and bloggers made good content material as you probably did, the internet shall be much more helpful than ever before.

Helpful info. Lucky me I discovered your website accidentally, and I am surprised why this accident did not came about in advance! I bookmarked it.

I just like the helpful information you supply to your articles. I will bookmark your weblog and check again here regularly. I'm reasonably sure I will learn plenty of new stuff right right here! Good luck for the next!

An outstanding share! I've just forwarded this onto a co-worker who was conducting a little research on this. And he in fact bought me dinner due to the fact that I found it for him... lol. So allow me to reword this.... Thank YOU for the meal!! But yeah, thanx for spending some time to discuss this subject here on your internet site.

Excellent web site you've got here.. It's hard to find high-quality writing like yours nowadays. I seriously appreciate people like you! Take care!!

Greetings I am so happy I found your web site, I really found you by accident, while I was searching on Aol for something else, Regardless I am here now and would just like to say thanks for a remarkable post and a all round enjoyable blog (I also love the theme/design), I don’t have time to read through it all at the moment but I have saved it and also added your RSS feeds, so when I have time I will be back to read more, Please do keep up the fantastic jo.

It's appropriate time to make some plans for the longer term and it is time to be happy. I have learn this submit and if I may I desire to counsel you few interesting things or advice. Perhaps you can write subsequent articles regarding this article. I wish to read more things about it!

great issues altogether, you just received a brand new reader. What could you recommend in regards to your put up that you just made some days ago? Any positive?

I have been surfing online more than three hours today, yet I never found any interesting article like yours. It's pretty worth enough for me. In my opinion, if all web owners and bloggers made good content as you did, the net will be much more useful than ever before.

Thanks for sharing your thoughts. I truly appreciate your efforts and I am waiting for your further post thank you once again.

I don't know if it's just me or if perhaps everybody else encountering issues with your blog. It appears like some of the written text on your content are running off the screen. Can somebody else please provide feedback and let me know if this is happening to them as well? This could be a problem with my web browser because I've had this happen before. Appreciate it