Since obtaining his law degree from McGill University in 1982 and passing the Quebec bar exam a year later,  attorney Michael Polak has enjoyed a successful career.

The son of parents of Dutch origin, Quebec Court Judge and retired  Liberal Member of the National Assembly Max Polak (pictured with Michael below),  and Celine Spier, Polak  grew up in Côte Saint-Luc. In fact his parents still reside in the same Wavell Road home. 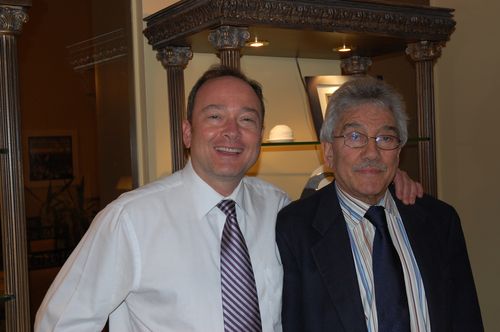 Over the years Polak has travelled to the Netherlands several times, usually with his parents, and  served as a member of the Canada Netherlands Chamber of  Commerce. He has also assisted the Netherlands  Consulate in Montreal with Dutch-Quebec contracts on numerous levels. Ironically, while his parents had to surrender their Dutch citizenship when they came to Canada more  than 50 years ago, through what he calls a “loophole,” Michael was able to claim dual citizenship about a decade ago.

Polak believes that these factors led to his formal confirmation this month as the Honourary Consul General for the Netherlands in Montreal. “As the  title explains this is honourary and I will not get paid,” he told me. “I will, nonetheless, try to represent the Kingdom of the Netherlands at every opportunity here.”

Polak’s mother is a survivor of the Holocaust and the Theresienstadt  concentration camp in the former Czechoslovakia. Her experience was in fact described in detail in the novel What World Is Left. It was written by Monique Polak, Michael’s sister and while it focuses on a fictitious character named Anneke and her family, it is inspired by  he experiences of  Celine Spier.  Michael  Polak says that until  his sister  began doing the research for this book, their mother had never discussed her experience in Theresienstadt

Max Polak, born to a Jewish father and a  non-Jewish mother, met Celine after the war in Holland. They  moved to Canada in 1954  and raised three children: Michael, Monique and Caroline, also a lawyer.

“This honourary appointment means a great deal to my parents and they are just tickled pink,” says  Polak. “ For many years the Netherlands had a full Consulate here. In fact, there was a Jewish Consul General named Albert Moses.  For budgetary reasons they had to close and I was actually approached more than a year ago. Even though my post is honourary  I needed a former letter from Queen Beatrix of the Netherlands. The Canadian government required a security clearance. This all took time. Now that it is done I am here to be of assistance. If people have VISA problems, I can help. I am in  constant communication with the embassy in Ottawa.”

Polak notes that this coming May will mark the 65th anniversary of  the  liberation of Holland. “It was Canada,” he said, “which played the most significant role.”

Indeed Canada’s most notable role in bringing about the end of the Second World War was the liberation of the Netherlands on May 5, 1945. To this day, the Dutch Royal Family sends 10,000 tulip bulbs to Ottawa each year as a show of thanks.  In the early hours of May 7, just two days after Canada’s victory in the Netherlands, Germany’s High Command of Armed Forces signed an unconditional surrender at a schoolhouse in Rheims, France. The following night, a second and final surrender was signed at a villa just outside Berlin.

Polak’s legal practice remains a busy one as the counsel for three international airlines,  a representative to a myriad of radio, television and production companies, handling licensing,  distribution, mergers and acquisitions for  foreign companies based in the Netherlands, Spain, France, Belgium, the United States, Germany and China . He is also involved in a  number of community activities.  His wife, Penelope Kershaw,  is the  president of one of the oldest philanthropic organizations in the city  The American Women’s Club of Montreal.  Polak says he will be counting on her  broad experience in community affairs in his efforts to  elevate the relations between the Netherlands and Montreal for greater cultural understanding and exchange.

Congratulations to you Mister Micheal Polak. Montreal is really a good place to visit and shop especially to the tourists.

This website is AMAZING. How do you make it look this good! GLAD TO KONW THE KINDLY FRIEND LIKE YOU.

It's not my first time to visit this web page, i am browsing this web site dailly and take nice facts from here daily.

What's Going down i am new to this, I stumbled upon this I've discovered It absolutely useful and it has aided me out loads. I'm hoping to contribute & help other users like its aided me. Great job.

After looking into a few of the blog articles on your site, I seriously appreciate your way of writing a blog. I saved it to my bookmark site list and will be checking back soon. Please visit my web site as well and let me know what you think.

Hey! Do you use Twitter? I'd like to follow you if that would be ok. I'm definitely enjoying your blog and look forward to new updates.