I met Canada’s Governor General, Her Excellency The Right Honourable Michaëlle Jean,  for the very first time. It was on the occasion  of her visit to   Share the Warmth in Point St. Charles, the wonderful organization which assists people living below the poverty line. Among the volunteers on hand that day were a group of students from John Grant High School in Côte Saint-Luc. 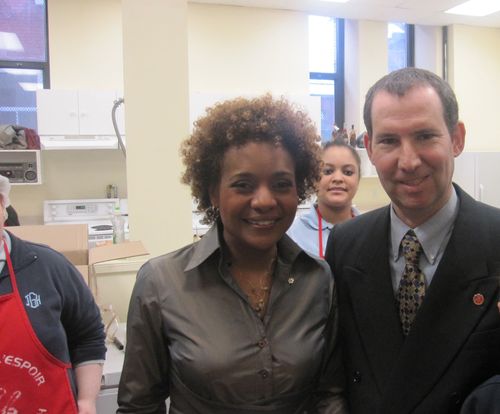 A well-known journalist and broadcaster in Quebec,   Jean immigrated from Haiti with her family at an early age. Fluent in five languages - French, English, Italian, Spanish and Haitian Creole - she is the first black Governor General of Canada. A social activist for women and children at risk, she has always said that her  plans called for  to using the office of Governor General to help disadvantaged young people.

Jean has been in this prestigious post for nearly five years. She travels around the world representing our country. Ironically her visits in  Montreal are few and far between. It is no surprise then that given her background as a social acfivisit she chose Share the Warmth, which began in the winter of 1989 after three women were moved to collect warm clothing and food for the homeless. They put out a plea to the public via an article in The Gazette.  The response was overwhelming.  People called to volunteer, to donate clothes, to sort clothes, to donate food and to help with deliveries.
The group incorporated in February 1990 and moved into Point St. Charles in 1991. They continued to collect and distribute food and clothing and deliver to the homeless on the street, to drop in centres and to shelters. It was in 1992 social workers and individuals from the community were requesting that food be given out to individuals and families living below the poverty line. That was the start of the food bank. The first month 39 baskets were prepared. In the next year the first request from a school for food came. James Lyng High School had a teacher who recognized that students were coming to school hungry. He began to give them snacks from his classroom. He asked for   help and that was the start of the School Food Program. From that base Share the Warmth expanded its programs to answer many more needs of the community. Each step of the way has helped thousands of people.
The Governor General spent almost two hours at Share the Warmth, shaking hands and talking to the many clients, playing with children and talking to students about their future. She is a classy lady and I can see why former Prime Minister Paul  Martin decided to recommend  her appointment to the Queen. Michaëlle Jean is a distinguished head of state and we  are lucky to have her.

Time would change everything. Everyone should be full of confidence. Believe life will be better next years. by Jordan 23