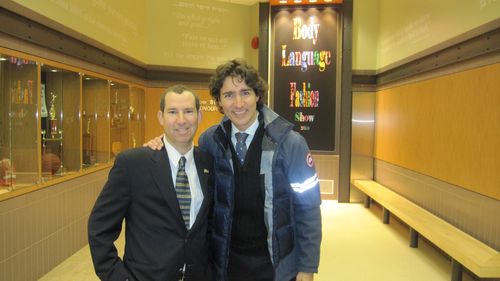 I have had the good fortune to spend time with Justin over the past couple of years, mostly when he speaks to students. To say he has a gift for the spoken word is an understatement. I have always seen him as a future Liberal Party leader and prime minister.

Becoming an MP was not easy for Justin. He should have been handed the safe riding of Outremont by former leader Stéphane Dion in a by-election nearly three years ago.  Instead Dion opted in favour of a journalist named Jocelyn Coulon . Seeing that the Grits had chosen a weak candidate, the New Democratic Party entered star candidate Thomas Mulcair in the race and  he won. Justin was forced to battle for a nomination in Papineau against two adversaries and then face an incumbent Bloc Québecois MP.

At the  Bialik talk Justin said he recognized there were a lot of cynics out there when he announced his decision to run: “I know that a lot of people were saying things like ‘What has he done? He is running on his last name.’ So I picked the toughest riding  to get nominated in and then to win an election. I did both.”

Before Justin gave one of two one hour talks at Bialik , Principal Andrew Trager told the students how fortunate they were to have a speaker of this calibre find the time in his schedule to come be with them. “This is an opportunity for you,” he advised. “I suggest you use it!”

And that they did, sitting attentively as he spoke about subjects ranging from the environment,  world poverty, social media and youth empowerment and his role as the Liberal Party’s official critic on multiculturalism and youth.

What motivated him to become a Member of Parliament? “The fact that my father was a politician and represented this area was something that actually served as a deterrent to me,” Trudeau responded. “If your dad is a lawyer or there is a family business, you  might  say that I want to find my own path. I decided not to go into law, which is what my father did before politics, but become a teacher. For me, becoming a teacher was important to help make a difference in this world.

“I wanted to make a difference  not because I was a Trudeau, but because I am a Canadian..As a teacher I was touching a lot of people, but I looked for the next step where I could have the most impact. That is where politics became a natural extension.”

While Justin has been considered a future prime minister since the day he made such an emotional eulogy at his father’s funeral, he was politically correct when responding to a question as to whether he covets the big job.  “Getting into politics is a way of impacting upon others,” he said. “If you are focusing on what your next step is then you are not paying attention to what you can do right now. Is it possible I will seek to become prime minister one day? Yes. Is it something I am planning for now? No. I want to think about what I need to do right now.”

Many students were eager to hear what it was like growing up as the son of a prime minister. “It was pretty neat,” he admitted. “Our home at 24 Sussex Drive had 13 bathrooms. At the same time we knew this was not our real house. We were given the opportunity to live there and travel around the world because it was contingent upon the job my father was doing.”

Check out  www.justin.ca for more on this great young man.

We are a bunch of volunteers and starting a brand new scheme in our community. Your web site offered us with helpful info to work on. You have performed a formidable job and our entire neighborhood will be grateful to you.