Saluting a future mayor, a hero and our Public Works Department 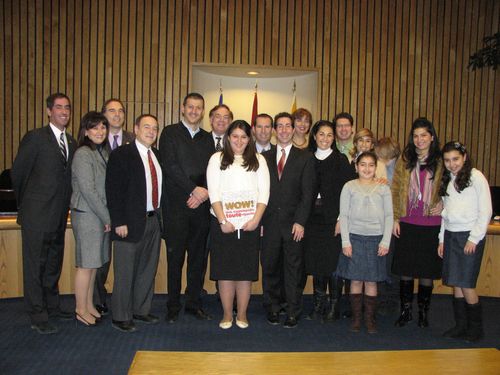 There was a lot to celebrate at the Dec. 14, 2009 Côte Saint-Luc Council meeting.

The winner of the 2009 Mayor For a Day essay-writing contest, Rina Dayan, read her winning entry at the meeting. Rina received a book, a copy of which will be placed in the Eleanor London Côte Saint-Luc Public Library. In addition, her school, Yeshiva Yavné received a $100 gift card to buy books for its school library.

During this evening, for the second consecutive year, the association representing public works professionals in Canada awarded Côte Saint-Luc the top prize in its annual National Public Works Week Awards.The Canadian Public Works Association (CPWA) awarded the top prize to Côte Saint-Luc among cities with a population of 75,000 or fewer. The results will be announced formally at the CPWA Luncheon at the American Public Works Association Congress in Columbus, Ohio on September 14.

Public Works Week in Côte Saint-Luc raised $4,000 for the Montreal Children’s Hospital Foundation over the course of several days, from May 19 to 24. Staff helped raise money  in different ways, such   as a pie-throwing event. Grade 3 classes from Hebrew Academy toured the Public Works Department facilities and our waste education staff visited École Maimonides to promote waste-free lunches and recycling. The Public Works Carnival closed on Sunday, May 24 with a barbecue, inflatable games for children, wagon rides, household hazardous waste collection and more.

Meanwhile, we also recognized a true hero.   On the afternoon of Oct. 18, an elderly driver of a vehicle suffered a medical problem and lost control of his car. The car barreled through two fences and plunged into a half-filled private swimming pool. The man was pulled from the car at the bottom of the pool and successfully resuscitated. At the time he left for the hospital by ambulance, he had regained a pulse and was  conscious. This miraculous story of survival would not have been possible if not for the rapid intervention of Martin Benko, a 17 year old Côte Saint-Luc resident who was walking his dog when he witnessed the accident. 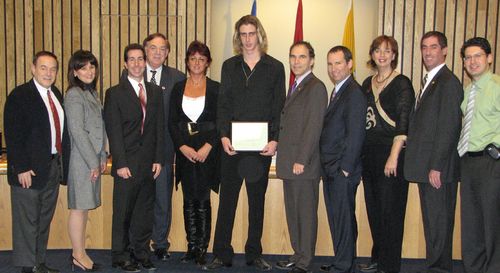 Martin quickly tied up his dog and jumped into the pool. He broke the rear window of the car which, along with the trunk, was the only part of the car not submerged, and pulled the man out. He dragged the man to the stairs of the pool where, as a trained lifeguard, he assessed that the man had no pulse. Mr. Benko suffered lacerations to his arms during the rescue.  We publicly saluted him at the meeting as well , with a special plaque.