I was shocked and very saddened to learn of the sudden passing of one my most distinguished constituents in District 2,  Mayer Schondorf at the age of 81. Born in Slovakia,  Mayer was a Holocaust survivor of Auschwitz and Buchenwald and he dedicated most of his life after escaping death at he hands of the Nazis to educating youngsters about his experience and those of others.  He was a frequent visitor to schools and worked closely with the Montreal Holocaust Memorial  Centre.

Municipally, Mayer was in touch with me on a regular basis – by telephone, email and in person. He and his wife Rena took long walks in the neighbourhood, keeping up a pace those half their age would envy. 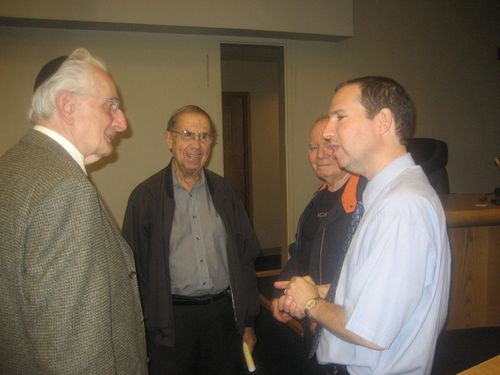 After many of these walks Mayer would contact me to report a problem he spotted, He and Rena regularly attended my District meetings, which focus on very local issues. Mayer is pictured at te very left with other residents in discussion with me at one of the meetings.

The Schondorf condo on Rembrandt Avenue faces Rembrandt Park. We have made many improvements there the last few years, but a major  project is planned beginning next summer which will see us add new tennis courts and remove the basketball courts. Mayer was very eager to be consulted on this. When we last spoke just a few weeks ago I promised him that there would be a meeting in the spring.

Mayer’s death is a tremendous loss to the Jewish community and society in general. He affected so many lives, notably the thousands upon thousands of non-Jewish students he spoke to over the years. For this is the best vehicle for combating anti-Semitism. Get to the kids who have never seen or met a Jew. Provide them with first-hand history. It leaves a tremendous impression upon them. I had the privilege of watching Mayer work his magic. He was just so good at it because what he said came from the heart.

Rest in peace Mayer. And to your family, my most sincere condolences.

Houses are expensive and not everyone is able to buy it. However, business loans are invented to help different people in such situations.

Hi everyone, good evening, my name is Carl, I share my views with you. The phone is a very interesting step forward, in fact I did not imagine how my life would have been without the phone, is a very simple science, yet a few decades ago was something that had been considered crazy. I am very grateful for sharing with you my opinion.

Greetings to all, I consider myself a fan of good articles, this blog is very good, has a great personality, is very original, very comprehensive, usually has very good features, for that reason I will recommend to my friends, I think when you find a good article must be shared.

A time when dreams so long denied Can flourish
As we unveil The love we now must hide.

It's great to hear from you and see what you've been up to. In your blog I feel your enthusiasm for life. thank you.