Salute to the Senior Men's Club and Seymour Kleinberg

I had the pleasure, along with the mayor and most of council, of attending the annual Côte Saint-Luc Senior Men’s Club Dinner Dance on October 22. This year the City Council, past and present, were the special honourees. Even former mayors Bernard Lang and Robert Libman were on hand. D’Arcy McGee Liberal MNA Lawrence Bergman and Mayor Anthony Housefather made wonderful speeches to the several hundred people in attendance at Le Crystal Banquet Hall in St. Laurent.

The Senior Men’s Club was started 22 years ago by the late Sam Rosenberg and now counts 420 members. They meet every Thursday morning and have a number of other programs, including excursions out of town. Ted Baker is the present day president with Sidney Margles serving as first vice-president. Harold Moscovitch heads special events and did a masterful job on this occasion.

I was particularly proud to be on hand to congratulate the 2009 "Man of the Year," a phrase designating acknowledgement to a man who has done  outstanding  service to the Côte Saint-Luc Senior Men’s Club. Previous members accorded this honour were Irving Karrasak, Issie Abramson, Sidney Barnett, Hy Lambert, Bunny Breslow,  Michael Kutz, Al Grosser and Morris Seidman----- most of whom are still active and serving the club to this day.

This year’s recipient was District 2 resident Seymour Kleinberg of Sir Walter Scott Avenue. His activities as a chairman, and/or associate  include golf, hospitality, trips, banquet, fellowship, and  as a member of the executive board. 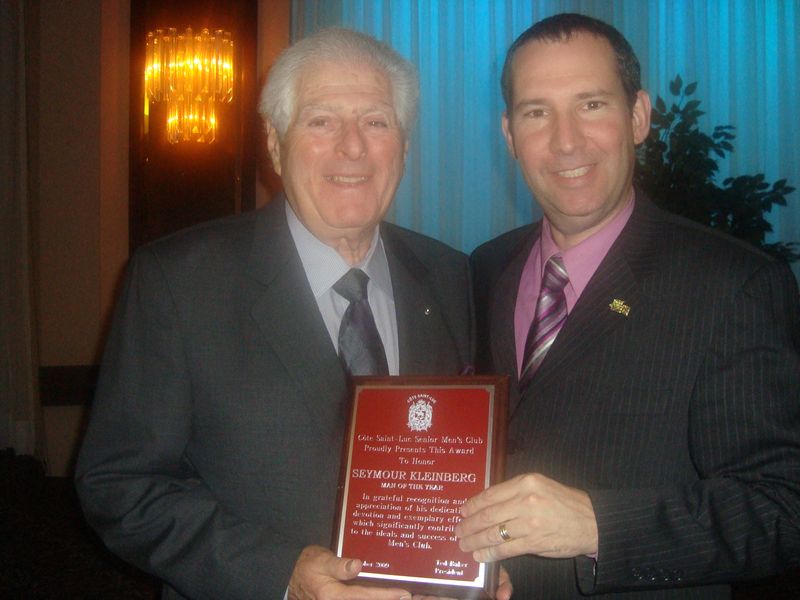 Seymour Kleinberg proudly displays his plaque as Man of the Year.

Seymour grew up in Outremont, was educated in the public school system and enjoyed an outstanding career in football as a defensive linebacker. After senior matriculation he entered the men’s clothing manufacturing sector with his father and uncle. He soon moved into retail  in rural Quebec, which made him fluently bilingual, after which he returned to Montreal as a manufacturer of ladies wear until his retirement. He married Renee in 1953 and was blessed with three children - Ellen, Sharon, and Carl. Seymour is the proud grandfather to Ryan and Benji.

Always community-oriented, Seymour was active in the Young Israel of Chomedey Congregation and Combined Jewish Appeal and the Mount Sinai Hospital  Sadly, his wife passed away in 1988. He now shares his time with Rhoda Baskin, a former executive-secretary in Neurology at the Jewish General Hospital, herself a widow and  now, retired. They have become inseparable companions these past 10 years, enjoying club activities as well as each other’s children and grandchildren.

Seymour is just about one of the friendliest men you can ever meet. I always enjoy his company and tip my hat to him once again.

Congratulations Seymour. The news of your being honored has even reached your favorite cousins in the USA.

I've been exploring for a bit for any high quality articles or weblog posts on this kind of area . Exploring in Yahoo I at last stumbled upon this web site. Reading this info So i am glad to convey that I've an incredibly good uncanny feeling I discovered just what I needed. I such a lot no doubt will mwke sure to do not disregard this site and proides it a look on a relentless basis.

Hi to all, it's actually a nice for me to visit this web page, it includes precious Information.