Election News: Acclaimed to office for another four years 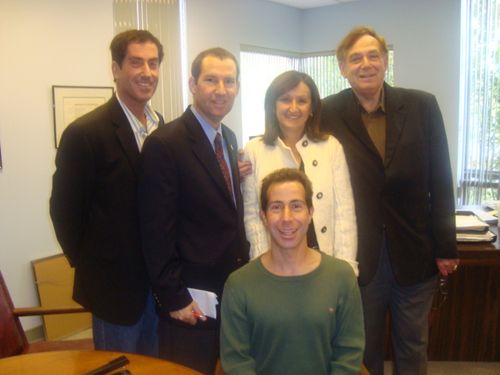 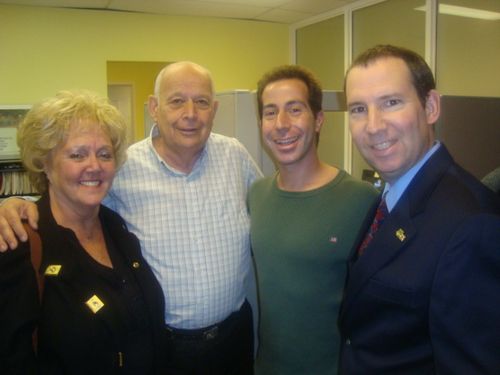 With my mother-in-law and father-in-law Shirley and Reuben (campaign manager) Spector and Mayor Housefather.

I am pleased to report that myself, along with Mayor Anthony Housefather and four other Côte Saint-Luc city councillors – Sam Goldbloom, Dida Berku, Mitchell Brownstein and Ruth Kovac -were acclaimed to office today (October 2) for another four years in office. Three of our colleagues – Steven Erdelyi, Allan J. Levine and Glenn J. Nashen – face opposition and now go into full election mode. The date of the vote is Sunday, November 1, with advance polls set for October25.

On a personal note I wish to thank my family for their tremendous support during my first term in office. I ran for the first time in 2005 in District 2, winning the election with 92 percent of the vote. Despite the wide margin of victory, I worked overtime for my constituents. I introduced the concept of District meetings, bringing together local residents at least twice a year to hear special guests and hear updates about issues of most concerns to them. Action was taken on hot button issues like traffic problems at Bialik High School and on Marc Chagall Avenue. I developed a wonderful personal relationship with my constituents, fielding multiple calls each day, as well as many emails. In terms of the city at large, I held the portfolio of corporate identity, communications and intercommunity relations. As such, I oversaw the development of the city

’s first ever, professionally run Department of Public Affairs and Communications. We launched a new website and introduced a variety of publications. I am very proud of the creation of the inter-community relations committee, which brought together representatives from community groups based in Côte Saint-Luc.

àBeing a member of city council requires a lot of commitment. There were many days where I would leave my office at the English Montreal School Board at 5 p.m. and head to City Hall, only to return home well after midnight. We are invited to attend a lot of public events.

I had the good fortune of covering Côte Saint-Luc City Hall for the local community press for many years. During this time some of my friends on council often urged me to run. After the demerger process five years ago, I decided to give it a shot. I must say that it has been a very rewarding experience. Yes, as noted, it requires a lot of time and patience. But as a councillor I saw that I have been able to make a difference. It gives me so much pleasure to get a call from a constituent and know I can resolve their issue.

During this mandate our mayor, one of the brightest men I have ever worked with, introduced the portfolio system. As such, each councillor became a de-facto cabinet minister if you will. It made the management of the city so much more efficient. At this point I must commend our city manager Ken Lerner for the stellar job he does day after day. If I email Ken at 1 a.m. he will respond at 1:01 am. To Public Affairs and Communications Director Darryl Levine and his associate Regine Banon, hats off for your hard work. To my campaign manager Reuben Spector, who also happens to be my father-in-law, thanks for steering the ship once again.

When I covered City Hall I learned one important thing about municipal elections: do not take anything for granted. In terms of my campaign, it really began the moment I was first elected. But last June I began preparing my strategies. In September campaign material was produced and new campaign posters placed on poles. I began my door to door campaign. Even though I have been acclaimed, I will continue to meet constituents and hear their needs and concerns for the next four years.

I want to expand my email list and send out more frequent links to my blog postings, which really keep constituents in the loop. One of the biggest issues we will deal with in the next mandate will be the future of the Cavendish Mall site. As for District 2, Beth Chabad will soon move into their new community centre across from Bialik while on Marc Chagall efforts are still being made by a developer to put up a new town house condominium project.

Thank you to the constituents of District 2 for showing your confidence in me for another four years!

Congratulations to Mike. Having followed his career since he was a teenager I can attest to his complete commitment and total devotion to our community. He was a tireless councillor in his first term and pursued the interests of his constituents (and I include myself as a resident of his area) in district 2, and all residents, with dogged determination. I know he will continue to shine for another four years. Mike is truly acclaimed!

Wheen soime one searches for his necessary thing, thus he/she wishes to be available that in detail, so thawt thing is maintained over here.

We're a group of volunteers and starting a new scheme in our community. Your site provided us with valuable information to work on. You've doone a formidable job and our whole community wiol begrateful to you.