A visitor from Japan Masako Awata, a town council member from the Japanese town of Toyoyama, toured the Côte Saint-Luc city hall and library and attended our city council meeting on Septembert 29. Councillor Steven Erdelyi, who taught English in Japan for two years, welcomed Councillor Awata in Japanese before Mayor Anthony Housefather invited her on stage to address to the audience. Councillor Awata was in Canada visiting her daughter, who lives in Côte Saint-Luc. Toyoyama, which is in central Japan, has a population of about 13, 500 and is the home town of Seattle Mariners all-star right fielder Ichiro Suzuki 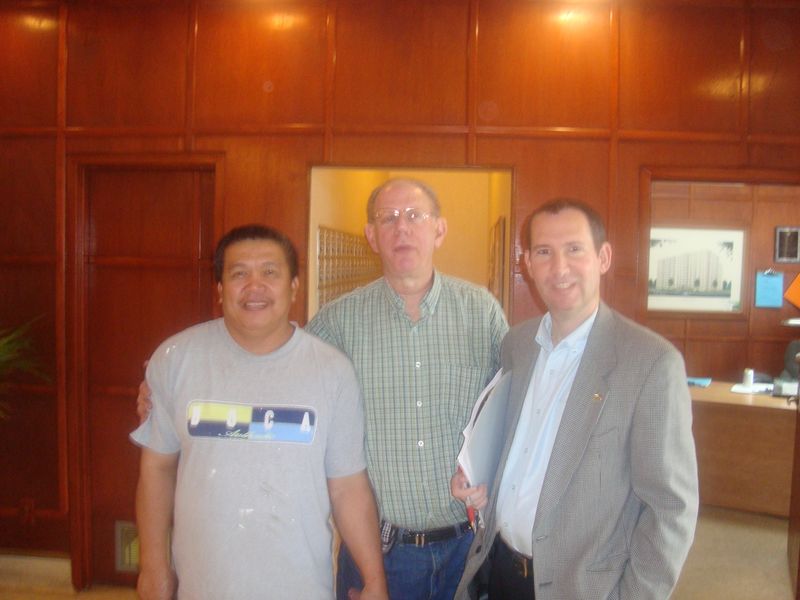 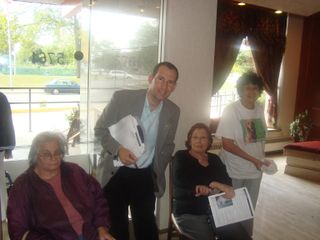 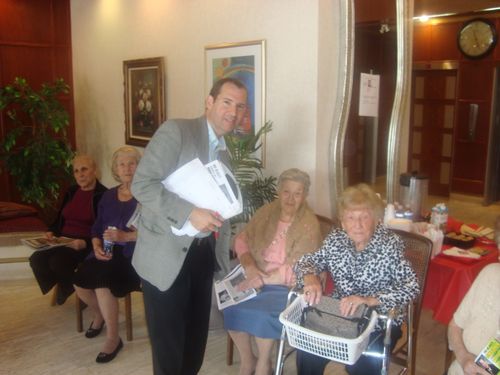 The city has undertaken some work on Kildare Road near Rembrandt. This included two solid days of paving. A number of small ditches were filled with over 10 tons of asphalt. It was done with a tar adhesive and a cold patch. This objective was to fill pot holes and street irregularities and it  should minimize vibrations following the water main breaks exprienced last winter. It is an interim measure since a large strip of Kildare Road will be fitted with brand new piping. Work is also finished on the repaving of  the street and sidewalks on Sir Walter Scott. Line painting will take place this week.

It has been a busy week on the campaign trail. On Rembrandt Avenue, constituent Martin Bogante was kind enough to go door to door with me in his highrise condo unit.  All of the people were a pleasure to talk to. Many of them, of course, do communicate with me by telephone or email already. After we finished knocking on every door Martin, a practicing lawyer who gives a lot of his time to the community, brought me outside to show me a parking spot on the street that is just a little too close to the entrance to his buiding's garage. Rembrandt Avenue residents Howard and Arlene Mayers greet me at their door.

I spoke to our city traffic engineer, Charles Senekal, and as luck would have it our crews will be doing some line painting next week. This space will therefore be marked off on the sidewalk, preventing vehicles from parking there and preventing any trouble from occurring.

Today, the official election period got underway. Even though I am unopposed at the moment I nonetheless made sure that my campaign posters are up in District 2.  Nominations close October 2 and I will continue to campaign hard.

Life without my Guiding Light

Thirty years ago, in a Midget hockey game at the Samuel Moskovitch Arena in Cote Saint-Luc, I was skating down the ice for the hometown Cougars trying to get by Hampstead Hornets defenceman Mark Alper. I was knocked off balance against the boards, fell hard and crushed two vertebrae on the spine. For several weeks I lay motionless on a hospital bed at the Montreal Neurological Institute, received physiotherapy and luckily walked out of the hospital in one piece.

Within six months I was virtually back to normal, but there were a number of repercussions from this injury. Because I had to give up my post as a counsellor at a children’s day camp, I filled my time doing two things that summer: launching my career in journalism at The Suburban by writing about a local softball league; and becoming addicted to a daytime soap opera. Yes, it is true. In 1979 I began watching the Guiding Light on CBS. It even became a bonding exercise between myself and my grandmother, she of blessed memory. Grandma Mary filled me on the previous 40 years of episodes and when I missed a show she even took notes for me on the plotlines. 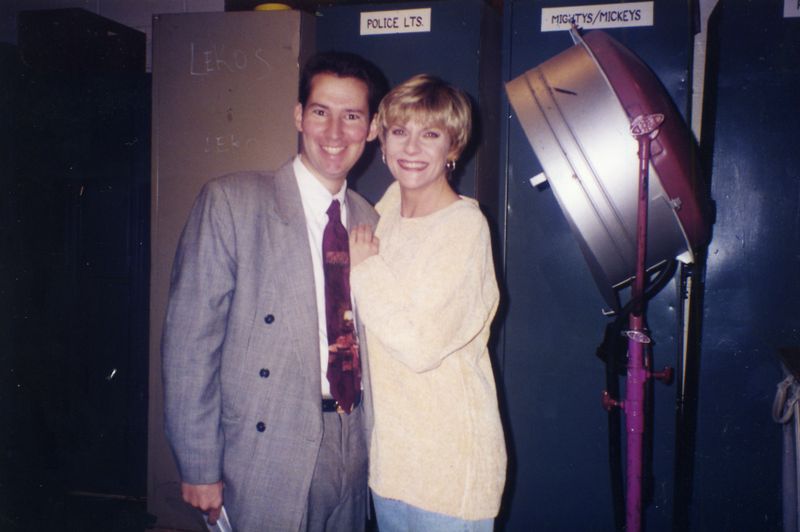 This Friday the Guiding Light will officially go off the air. Over the years I have become aware of several Montrealers who shared my passion for the show. When I posted a note about the show on Facebook last month, several of my "friends" offered some of their memories. 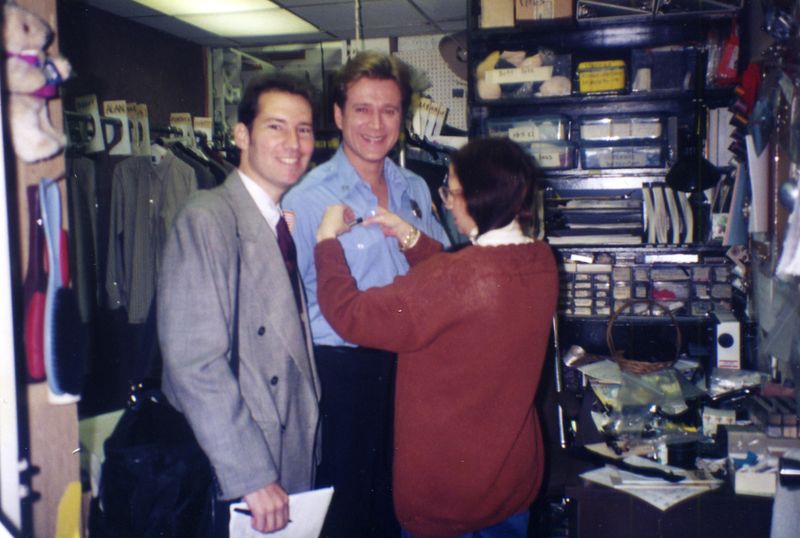 Honestly, I do not know how to describe my feelings as the show winds down. This is an addiction I tried to kick on more than one occasion. I was in high school, Grade 11, when it all started. The bell would ring at 3 p.m. and I would race for the bus, usually getting home in time to see the final 45 minutes. We had one VCR in the house, the earliest versions, and my brother would often cruelly switch the channel to ABC. I would arrive home, horrified to see an episode of General Hospital taped instead of Guiding Light. I went to CEGEP at Dawson College and the old Viger campus near Old Montreal. Two blocks away was the Berri bus station, where for 25 cents per 20 minutes you could actually watch a small television attached to a chair. I took that route on more than one occasion.

In 1994 I realized a lifelong dream. While in New York City for a conference I reached the publicist for Guiding Light and talked my way on to the set, which at the time was in an office building not far from Broadway. While I have had the good fortune to meet many celebrities in life, this experience virtually left me speechless as I sat down to talk with the likes of Kim Zimmer (Reva) and Frank Dicopooulos (Frank), pictured above. From high school, to CEGEP, university, marriage and parenthood, Guiding Light has remained a constant in my life. No matter what time I got home, I knew I could forget my own problems by focusing on the unrealistic lives of the people from the fictitious town of Springfield. On days where I simply did not have time to see the entire show, I fast forwarded and pretty much read lips or reviewed the summaries online.

On Friday my addiction will be kicked. It’s a day I never saw coming. Tune it to CJAD  (www.cjad.com) at noon Friday when I will talk about Guiding Light on the Kim Fraser Show.

Mayor Housefather endorses all 8 councillors; and they support him

Cote Saint-Luc, September 6, 2009: With municipal elections for the City of Cote Saint-Luc scheduled for November 1, 2009, incumbent Mayor Anthony Housefather and all eight of his city councillors have announced their intention to seek re-election .

The mayor is extremely pleased with how well this council has functioned as a team. While each will run independent campaigns , the mayor has announced support for each of his incumbent colleagues: Sam Goldbloom (District 1), Mike Cohen (District 2), Dida Berku (District 3), Steven Erdelyi (District 4), Alan J. Levine (District 5), Glenn J. Nashen (District 6), Mitchell Brownstein (District 7) and Ruth Kovac (District 8) and each councillor has announced their support for Mayor Housefather’s re-election.

"This has been an excellent council over the last 4 years," said Housefather. "I really do believe we have found an effective and businesslike way to govern the municipality. I have always believed in empowering each member of council and I am very pleased with the success that has come with my decision to assign portfolios to each councillor. They became de facto cabinet ministers if you will and rose to the occasion. We have accomplished everything that was promised since demerger and more and I would be proud to serve with each one of them for the next four years."

The reconstruction of curbs, sidewalks and the pavement on Sir Walter Scott Avenue has begun at a cost of more than $200,000.  Work will last until at least September 17.  This will greatly benefit the residents of the five apartment buildings on the street and, of course, Ilan Ramon Crescent residents who travel on Sir Walter Scott every day. 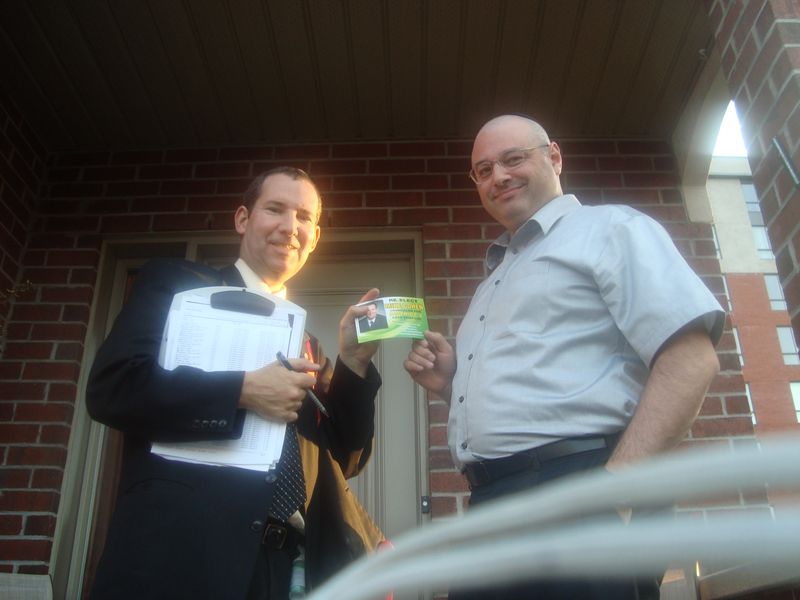