On behalf of my co-chair, Councillor Sam Goldbloom, thanks to everyone who made this 30th annual Côte Saint-Luc Seniors Golf Outing at Meadowbrook a huge success. Councillor Goldbloom and I had the pleasure of golfing with Police Station 9 Commander Sylvain Bissonnette, a gentleman who has been so beautifully connected to our community since his arrival on the scene a few years ago. I had the chance to speak to a number of my constituents out on the links. Below right is Seymour Kleinberg of Sir Walter Scott Avenue, with myself and  Sam. Below left, is Sidney Margles of Marc Chagall Avene. 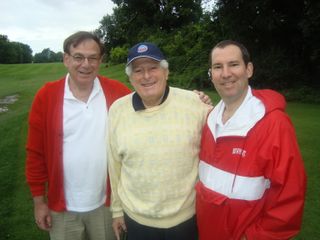 The weather was a bit cooler than in the past years and while the clouds were threatening, we avoided the rain.

Loretta Anisef and Ted Cox did their usual fabulous job behind the scenes. Each participant received a sleeve of callaway golf balls and a special golf tool, both with the 30th anniversary logo. There were two sponsors for the event : Les Services Graphiques PR and the law firm of Bélanger Sauvé. The Jean Coutu Pharmacy handed out some hip gift bags to each participant at the banquet.

This year we also raised funds for golf legend Arnold Palmer's charity, Arnie's Army Battles     Prostate Cancer. The fee to take part in this fundraiser was $40. Participants entered in the draw were eligible for several prizes, including a $100 gift certificate for Callaway golf products and a golf town gift card. We also accepted lesser donations for those who want to support the charity. Those people received a support bracelet. More than $600 was raised, which is quite impressive given the fact we had only 80 or so golfers. 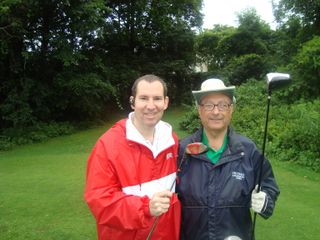 The traditional closest to the hole and longest drive (both for male & female) competitions were held, with trophies presented at the banquet where everyone enjoyed a piece of the special 30th anniversary cake. Many door prizes were handed out. Mayor Anthony Housefather gave opening remarks. 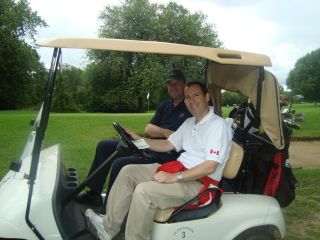 Above, Police Station 9 Commander Sylvain Bissonnette shares a golf cart with me. To the left, Sam and I admire the 30th anniversary cake.

Interested topic to read. I had great time reading and visiting this blog here. I can get more golf ideas and info's from this page. Thanks for writing here. You can have golf info's here http://ukgolfdirect.net/