A wonderful Spring Fair in CSL

The second annual Côte Saint-Luc Spring Fair took place on Sunday, May 24 at and around Pierre Elliott Trudeau Park on Mackle Rd. This extraordinary event included the Côte Saint-Luc Garage Sale, Emergency Services Day, the Public Works Fair, and EcoAction Day. By combining four popular events, we have created a destination for people of all ages to spend an hour or two. As our mayor so correctly points out, "An event like the Spring Fair helps create a sense of community and provides the residents of Côte Saint-Luc with a memorable experience."

There were 60 tables at the Garage Sale, all of which sold out soon after becoming available. This took place at the covered Confederation Annex building. District 2 resident Erwin Luden, for one, barely had anything left to sell at his station when I visited near closing time.

Emergency Services Day took place at the parking lot of Pierre Elliott Trudeau Park and featured emergency vehicles for kids to climb into. Kids and adults were also able to speak to police officers, fire fighters, Emergency Medical Services (EMS) lifesavers, Public Security constables, Volunteer Citizens on Patrol (VCOP) and other members of the safety services. At one point during the day EMS instructors demonstrated how to stop someone from choking by performing the Heimlich manoeuvre. One VCOP on hand was District 2 resident Jason Balinksky and his trusted German Shepherd Ginny. 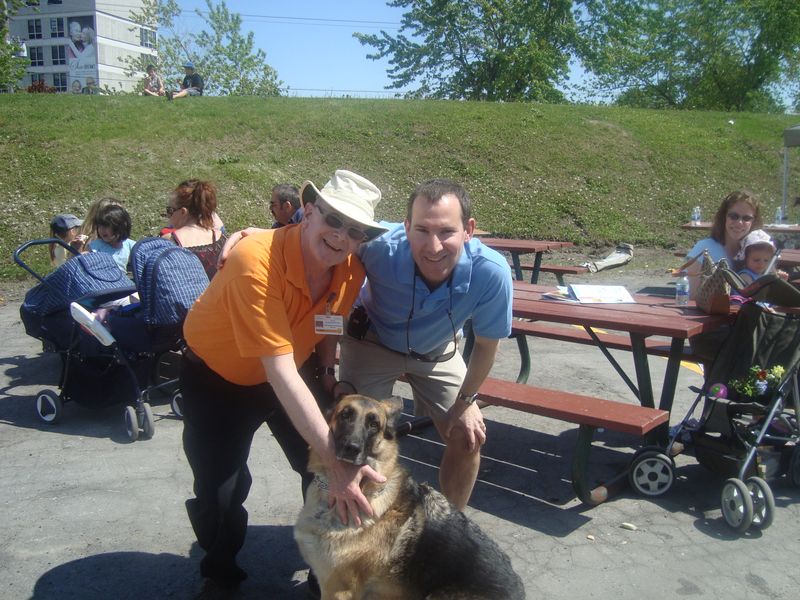 The Public Works Fair took place next to the Public Works Building and featured barbecue food, inflatable games for kids, arts and crafts, and more. Donations were being accepted for the Montreal Children’s Hospital Foundation.

Finally, EcoAction Day took place next to the Public Works Building. Visitors learned about recycling and curb-side compost collection, received free garden compost, and were able to drop off household hazardous waste. Kids learned about composting and how to make a zero-waste lunch.

Mother Nature was most cooperative once again this year. The weather could not have been nicer.