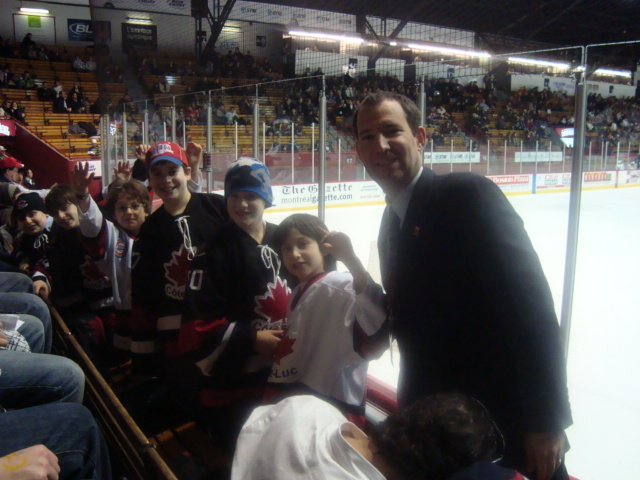 I spent part of the game sitting with players from our Minor Hockey Association.

The Montreal Juniors game against the Halifax Mooseheads on Monday, February 2 at the Verdun Auditorium was declared Côte Saint-Luc Night. Players from the Cöte Saint-Luc Minor Hockey Association, most with their dads, took in the exciting matchup, which saw Montreal lose 4-3. Before the game team captains Matt Fillier (Montreal) and Graham Bona (Halifax) took part in the opening faceoff with (Cöte Saint-Luc Councillor Ruth Kovac, Mayor Anthony Housefather, team president Martin Routhier and linesman David Taveroff, by day Côte Saint-Luc's director of Parks and Recreation. Mayor Housefather and Councillor Kovac were joined by myself and Councillors Steven Erdelyi, Allan J. Levine and senior Parks and Recreation staff at the game. During the first intermission In Fusion Catering, based on Westminster Ave. in Côte Saint-Luc, hosted a dinner for the mayor and council in the Juniors' VIP room. Montreal is in its first year of competition in the Quebec Major Junior Hockey League. Businessman Farrel Miller, who plays in the Côte Saint-Luc Executive Hockey League, purchased the franchise from Newfoundland and moved it to Montreal. Côte Saint-Luc was pleased with this first effort at a partnership with the team and hopes to repeat this. I am proud to have initiated this event, which kicked off Winter Carnival Month in the city. Allan J. Levine and Mayor Housefather with some of our hockey players at the game.

On a personal note it was great to meet such a young and vibrant Cote Saint Luc Council and staff having such a positive impact on the community they represent.
- Ian Tanner (Montreal)

It is partnerships like this that will ensure Junior hockey's viability in this city.

I was more than happy to find this site. I wanted to thank you for ones time for this particularly wonderful read!! I definitely enjoyed every part of it and i also have you saved as a favorite to check out new things in your site.

Hey, I think your site might be having browser compatibility issues. When I look at your website in Ie, it looks fine but when opening in Internet Explorer, it has some overlapping. I just wanted to give you a quick heads up! Other then that, very good blog!

I do accept as true with all the concepts you've presented for your post. They are really convincing and will certainly work. Still, the posts are too quick for novices. Could you please lengthen them a little from next time? Thank you for the post.